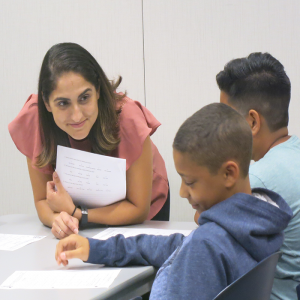 Eymi Roa, senior case manager, with youth at a HPAL Get It Straight training session.

The difficulties started just before her son’s 14th birthday.

Karina Rodriguez’s youngest child and only son had always possessed a strong will, but puberty had amplified it. He became moody, defiant and disrespectful.

“It was his way or no way,” Rodriguez said.

She grew more fearful as he began to hang out with a new set of trouble-making friends easily described as the “wrong crowd.”

“I felt like I had tried everything,” she said. “I felt helpless.”

That’s when she found a flyer about the Get It Straight (GIS) program at the Los Angeles Police Department’s Hollenbeck Community Police Station in Boyle Heights. It changed everything.

The Get It Straight program of the Hollenbeck Police Activities League (HPAL) aims to reduce juvenile delinquency through training and services for parents and children ages nine to 17.

It is one of several programs through which the LAPD partners with the USC Suzanne Dworak-Peck School of Social Work to offer internships to MSW students. The mutually beneficial arrangement allows social workers in training to apply their studies in the field, while providing much-needed services on-site, said Rosemary Alamo, clinical associate professor of field education.

It is also a way that USC gives back to the community that surrounds the University Park campus.

According to Eymi Roa, HPAL senior case manager, funds from the Good Neighbors Campaign will help staff provide more direct services that will help students stay in school and improve their personal, social and academic progress.

USC’s investment in HPAL’s Get It Straight program has already yielded dividends, both for families like Karina Rodriguez and her son, and for the MSW students who train there.

One notable statistic: 80 percent of the youth who go through the Get It Straight program make a commitment to abstain from drug use. A similar number of parents complete the program to enhance their communication skills and ability to spot early delinquency behavior.

Rodriguez said the program helped her to better understand the physical and emotional challenges her son faced.

“I learned how to listen and not react,” she said. She also shifted how she spoke to him, replacing commands like “go do the dishes” in favor of requests to “come help me do the dishes.”

That parenting style is different than Rodriguez experienced when she was growing up. Her mother demanded respect and obedience, and sometimes used physical punishment.

“My mother’s parenting style was effective,” she said. “But I did not want to use her ways of parenting with my kids.”

Rodriguez’s two older daughters never posed as much of a challenge to her as her son has. The family has overcome real difficulties over the years: her divorce from the children’s father ten years ago left them homeless for a time.

Rodriguez got back on her feet and now works as a mail carrier for the U.S. Post Office. She has to work hard to make time for her kids and still complete her ten-hour shifts delivering mail.

“I just wanted help with my son. I needed somebody to guide me through managing a troubled teen,” she said.

She recalls having to bribe him with ice cream or chips to attend the first Get It Straight sessions. He resisted, but she stood her ground.

The program utilizes family communication exercises and the introduction of family protective factors, as well as case management, mental health sessions, and delinquency diversion activities to encourage youth to stay in school and develop a clear path toward a successful adult life.

“I tell the students “when your mom gave birth, no book came out,’” Roa said. She encourages the youth to see their parents as allies and as human beings trying their best, rather than as the enemy. For parents, she helps them understand the pressures of growing up in Boyle Heights in proximity to gang activity and teenage drug and alcohol abuse.

Rodriguez saw her son at the sessions. He pretended to tune out, but she could tell he was listening.

After a few weeks, she no longer had to bribe him with ice cream to attend the sessions. He wanted to go.

Lorraine Garcia, executive director for HPAL, said the partnership with the USC Suzanne Dworak-Peck School of Social Work has been instrumental in the enhancement and delivery of the Get It Straight program.

The partnership with the social work interns has helped remove the stigma of seeking mental health counseling for youth and parents, Garcia said.

“We used to refer them to mental health services but would see only 25 percent or so take advantage of the help,” Garcia said. With social work interns able to conduct individual and group therapy sessions on site, that rate has skyrocketed to 90 percent, Garcia said.

According to Alamo, HPAL has also become one of the most popular placements for MSW students, in part because of the level and amount of support the interns receive from the HPAL team. And its success has led to similar programs at other LAPD divisions, as well as police departments, in Santa Monica, Fontana and Gardena.

Interns are also placed with the USC Department of Public Safety. The Law Enforcement and Social Work Collaborative is in its fourth year of existence and is overseen by both Alamo and Rick Ornelas, clinical associate professor.  The benefits have resulted in both the expansion of internships within law enforcement settings and workforce development.

Funding from the Good Neighbors Campaign helps pay for services and support offered by HPAL staff, complementing the mental health services provided by the social work interns. Working together, HPAL staff and the USC Suzanne Dworak-Peck School of Social Work hope to see many more outcomes like that experienced by Rodriguez and her son.

“The changes were slow and gradual over the weeks,” Rodriguez said. “But at the end, when I looked back, I could see that his way of thinking has changed. Now he tells me things. He’s more open to me.”