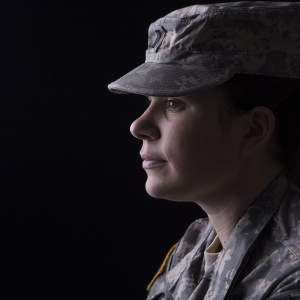 For members of the military who have experienced sexual assault while serving, the trauma and life-changing impacts of the violence and retaliation for reporting are crushing. Winning the battle against what Secretary of Defense Lloyd J. Austin, III has called the “scourge of sexual assault” may not be easy, but there is a path forward, according to USC Suzanne Dworak-Peck School of Social Work researchers who specialize in military social work. Their research-based recommendations are being considered as part of a national effort to improve climate and culture in the military.

“A one-size-fits-all approach will not end sexual assault in the military,” said Sara Kintzle, deputy director of the Military and Veterans Programs (MVP) and associate research professor at the USC Suzanne Dworak-Peck School of Social Work, in her presentation to the Independent Review Commission on Sexual Assault in the Military created by the U.S. Department of Defense (DOD). “What is needed is holistic, multi-level, population-specific interventions that take into account the unique needs and experience related to military service.”

The military has struggled to address sexual assault within its ranks for years, triggering congressional hearings and frustrating military leaders who have searched for effective prevention, treatment and prosecution methods. The most recent of the DOD’s anonymous surveys, done in 2018, found that more than 20,000 service members said they experienced some type of sexual assault, but only a third of those filed a formal report.

During her testimony, Kintzle drew upon learnings from USC MVP’s sexual assault prevention work, making recommendations for how to improve prevention programs and sharing lessons learned from her direct experience. She detailed the importance of working at two levels: holistically, to fix a system-wide problem, and targeted to meet the specific needs and reduce risk in different groups of people.

“There is not just one innovation that fixes this. We have to be thoughtful about who we target with programs and messages and when,” Kintzle said. “We need interventions that target service members at the times when they are most vulnerable: such as when they enter the military and when they move to a new location.”

Bringing research to the highest decisionmakers

Kintzle, who joined USC in 2013, has earned a reputation as an emerging national leader on issues related to military service. She studies the life experiences of individuals who have served in the military and hopes her research will shine a light on how the country can better meet their needs as they face the challenges of sexual harassment, stalking and sexual assault as well as military transition, risk of suicide and finding work after they have left the service.

She was joined on the panel by Ashley Schuyler, a former USC Suzanne Dworak-Peck School of Social Work Military and Veterans Programs project specialist and current doctoral student at Oregon State. Schuyler presented on the work of USC’s Military Acceptance Project and the landscape of LGBTQ+ military research in 2019, which examined the disparities in social acceptance that existed among LGBTQ+ service members in the military.

Kintzle and Schuyler presented to the entire commission first and were invited for a follow-up session with those working in the climate group. The testimony took place over Zoom webconference due to pandemic health restrictions. The researchers were also asked to provide a set of recommendations for improving climate and culture within the military.

“We’re tackling some of the most difficult issues facing our military and it is our duty to understand the stories of those who have experienced sexual assault and violence but also to do everything we can to fix it,” said Carl Castro, director of the school’s Military and Veterans Programs.

While Kintzle has presented to federal policymakers multiple times, testimony to this presidentially directed independent commission marked the most direct link she, and the school, has had to bring policy work to high-level decisionmakers. She was heartened by how open commission members were to their research and recommendations.

“They wanted to know what we thought was best and were open to challenging ideas and long-standing practices,” Kintzle said. “It is hard to make big shifts in the military, but they were willing to consider big changes.”

The Independent Review Commission on Sexual Assault in the Military is expected to make its recommendations in late June 2021.