Inside the USC Social Work Center for LGBTQ+ Studies 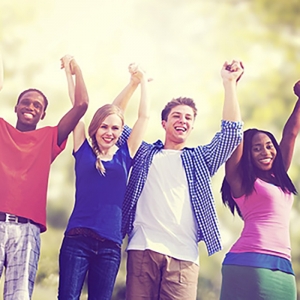 The USC Center for Lesbian, Gay, Bisexual, Transgender, Queer+ (LGBTQ+) Health Equity (CLHE) at the USC Suzanne Dworak-Peck School of Social Work has offices on USC’s University Park campus, but like everything during the COVID-19 pandemic, much of their work is done virtually these days.

That work includes the study of the health and well-being of LGBTQ+ youth, adults and families as well as community engagement and education to guide on-the-ground practitioners in how to close gaps in health care for this community.

It is an exciting time for CLHE. Founder and Associate Professor Jeremy Goldbach has attracted big research awards from the Department of Defense, the National Institutes of Health and others. Among the research projects are studies of the effect of discrimination on adolescent health as well as an intervention study that has achieved some impressive preliminary results in improving mental health outcomes. John Blosnich, assistant professor who joined CHLE and USC and the beginning of 2020, just received a research award from the National Institute of Mental Health to study how religious beliefs interact with suicidal ideation over time among a cohort of LGB adolescents and young adults.

Goldbach founded the center when he joined the social work school in 2012, and in eight years, he has watched it grow into a thriving hub for study with six affiliated faculty, a post-doctoral scholar and about two dozen undergraduate and graduate students. All contribute to its vision of a world that promotes the well-being of all people regardless of sexual orientation or gender identity.

“At the heart of most of our work is the concept that development is a lifelong process,” Goldbach said. If social workers and other health professionals want to help adults lead healthier lives, it does not work to view them in a vacuum. “You need to see and understand their life experiences since childhood. To understand a person, you have to understand their life course,” he said.

Two grants from the National Institute on Minority Health and Health Disparities (NIMHHD) funds research to understand and intervene upon discrimination stress among LGBTQ+ youth over time. They are some of the first studies to look at the LGBTQ+ adolescent experience nationally and how stigma and discrimination may influence health or be the target of interventions over time. As the coronavirus pandemic took hold, Goldbach and the team were able to add in a special assessment of how LGBTQ+ youth participating in the survey were coping with shelter-at-home orders and school closures.

While analysis of the findings is still underway, Goldbach said it was clear that the COVID-19 quarantine experience was mixed for LGBTQ+ youth based on how much support individuals could expect from their families while sheltering at home. For some, it was a relief to be out of the school environment. For others, being at home 24/7 meant more scrutiny on Internet use, and cutting participants off from supportive networks. “What we want to know is how those experiences of discrimination and support affect future health,” Goldbach said.

With a background in public health, Blosnich's research focuses on interpersonal and self-directed violence among LGBTQ+ youth and adults, as well as U.S. military veterans.

His latest work has recently been in the news, with its finding that LGBTQ+ people who have undergone conversion therapy are almost twice as likely to attempt suicide, compared to LGBTQ+ people who had not experienced the discredited practice. Currently, 20 states and Washington D.C. have laws banning the practice of trying to change a youth’s sexual orientation, gender identity or gender expression by licensed health care professionals. The laws do not cover religious providers.

Published in the American Journal of Public Health in July 2020, the article “Sexual Orientation Change Efforts, Adverse Childhood Experiences, and Suicide Ideation and Attempt Among Sexual Minority Adults, United States, 2016–2018” reports findings that about seven percent of LGBTQ+ adults age 18-59 in the United States have experienced conversion therapy, with most receiving it from a religious leader.

Blosnich wants to make sure that people understand that the practice is not only ineffective, but also is correlated with devastating effects that increase risk of suicidal thoughts and attempts. “Outreach to the public on the harms of conversion therapy is needed, particularly where the practice is common,” he said.

Goldbach and Blosnich’s commitment to producing quality research is matched by their desire to see that their work contributes to meaningful change in the world.

“I’m a social worker and a community organizer at my core,” Goldbach said. While research is gratifying and can have an impact over the long-term, he also gains satisfaction from helping educators and others in the field to become familiar with issues surrounding sexual orientation and gender. Currently, they conduct trainings funded by NorCal Mental Health America for teachers across California on working with LGBTQ+ youth.

“It is a more immediate type of impact, to work with school employees directly, knowing that the next day they may bring more understanding to a conversation with students,” Goldbach said.

The CHLE researchers share a belief in their collective obligation to serve the community they live in. Another way they will accomplish this is through efforts kicking off this school year to develop a training for USC social work faculty on LGBTQ+ issues. A major component will be a comprehensive curriculum review scanning educational materials for content, applicability and outdated language.

CHLE also makes its learning resources available online for anyone to view. Among the videos found on its webpages is one in which Blosnich reviews studies using the U.S. Department of Veterans Affairs data about transgender veterans’ health, including suicide risk. By design, the CHLE webinars feature researchers, community leaders, ethicists and others talking about questions and issues they are facing, rather than presenting completed findings.

“We ask people to give talks about a problem they are grappling with to foster thought and conversation,” Goldbach said. These collaborative discussions are another example of the center’s commitment to facilitating dialogue, broadening awareness and promoting social change.

Goldbach has a second study funded by the NIMHHD which tested the feasibility of a LGBTQ+-affirming intervention called Proud and Empowered. The study included a community organizing component aimed at changing the school climate and reducing students’ experience of bullying. An inclusive school environment is key for students’ development so they feel supported and not isolated.

Data collection at four test schools in the Pasadena area was completed in early February, and shows some preliminary, positive results. The students seem to be avoiding discrimination and achieving better mental health outcomes.  A paper on the findings and subsequent recommendations is in the works.

It was not too long ago that LGBTQ+ research was considered marginal or niche research. Over the past decade, that perception has shifted as large research-funding institutions, such as the NIMHD, have lent federal recognition to the health challenges of the LGBTQ+ community.

Goldbach was recently appointed as a member of the Health Disparities and Equity Promotion Study Section of the Center for Scientific Review of the National Institutes of Health. It is an important role that gives Goldbach the opportunity to lend his expertise in the review of NIH research applications for a four-year term. For Goldbach, the appointment’s significance is greater than personal validation of his work. “It shows just how far LGBTQ+ researchers have come in just the last 10 years, to be at the table and taken seriously as scientists,” he said.

On June 28, 2019 the LGBTQ+ community marked the 50th anniversary of the 1969 Stonewall Uprising in Manhattan, which began the Gay Liberation Movement in the United States. This month, the Supreme Court finally ruled that LGBTQ+ workers are protected by the civil rights law. Signs of progress and reason for optimism, for sure, though some steps backward have recently occurred as well, such as the ending of protections for transgender people receiving health care. CHLE’s work in improving and protecting the health and well-being of LGBTQ+ individuals and communities will continue to be important for years to come.