Using Gender Pronouns to Be a Better LGBTQ+ Ally 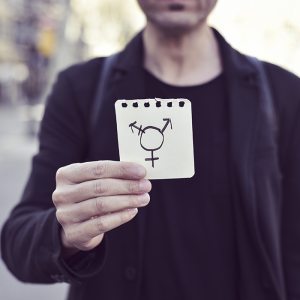 Associate Professor Jeremy Goldbach outlines general guidelines for navigating gender pronouns with anyone in your life.

While often lumped together, sex and gender are significantly different constructs. Sex, often called “sex assigned at birth”, is largely based on the biological chacterisics a doctor can see just moments after a baby is born.  Gender, on the other hand, is a social construct, tied not to your body parts, but to often constricting societal definitions of what it means to be a “man” or a “woman.” Critically, one's internal understanding of their gender identity and their outward expression of that identity may align, diverge or fluctuate in relation to their biologically assigned sex.

For example, a person who was assigned “female” at birth  may identify as a woman, a man, neither a man nor a woman, both a man and a woman, somewhere in between, or fluctuating between both. That is, because gender encompasses such a wide spectrum of possibilities, how one refers to themselves linguistically—with pronouns such as “he/him,” “she/her,” or nonbinary terms like “they”—may vary greatly.

Staying abreast of the ever-evolving dialogue surrounding sex, gender and gender identity can feel overwhelming, but according to Jeremy Goldbach, associate professor and director of the Center for LGBT Health Equity at the USC Suzanne Dworak-Peck School of Social Work, it doesn’t have to be. “Gender pronouns are simple, it is just our understanding of them that is not,” he said. Goldbach, whose research focuses on trauma, discrimination and interventions for LGBTQ children and adolescents, offered a set of general guidelines for navigating the landscape of gender with respect and consideration.

Simply acknowledging that variance in gender identity and expression, and their associated pronouns, can help naturally create an inclusive space for all. “When I start a meeting and say, ‘Hi my name is Jeremy, I’m a faculty member at USC and my pronouns are he and him,’ I’m signaling to others that I at least have a basic understanding that gender diversity exists,” Goldbach said. “I’m also creating a dialogue for people who may have never stopped to think about gender, helping them understand that it’s a social construct, not a biological one.”

Goldbach further explains that cisgender individuals—those whose gender expression aligns with the sex they were assigned at birth—have an integral role to play in advancing the gender dialogue. “As a cisgender person, it’s not dangerous or controversial for me to say that I prefer the pronouns he and him—since this is in line with what society expects of me,” he said. “However, by sharing my gender pronouns, I let gender noncomforming individuals know they have an ally in the room.” Gender nonbinary people, Goldbach clarified, are those whose gender identities don’t conform with the social expectations placed upon them.

In one-on-one settings, consider directly asking an individual their gender pronouns, and share yours. This effort indicates that you aren’t making assumptions.  For example, “a student may appear to you as “male” because of their safety, but use “her/she” pronouns with someone she trusts,” Goldbach said. “By simply asking the question, you’re letting someone know they can be themselves with you. How they answer is ultimately their choice.”

Gender nonbinary individuals are often misgendered, meaning they’re referred to by gender pronouns with which they don’t identify. According to a study in the Journal of Self and Identity, 32.8 percent of transgender individuals said they felt stigmatized when they were misgendered. In addition, those who were misgendered more frequently had lower self esteem and a reduced sense of strength and continuity in their identity.

Taking the time to show that you’re aware of the diverse nature of gender can have a profound impact on the well-being of SAGNC people. “When we use the correct gender pronouns, we’re affirming an individual’s identity and building a network of support,” Goldbach said. For gender nonbinary students, who experience higher levels of violence compared to their cisgender peers, having a trusted friend to turn to can offer a sense of security and hope.

While becoming comfortable navigating conversations about gender pronouns can be a bit confusing, Goldbach warns against letting a fear of accidentally using the wrong gender pronouns keep us from broaching the topic.

“A mistake is different from continuous, intentional misgendering, in which an individual’s gender is blatantly ignored,” he said. “If you use the wrong gender pronoun, it’s best to quickly acknowledge your mistake, apologize and move on. Don’t ignore the error, but don’t draw too much attention to it either—turning it into a huge deal simply reinforces existing stigma and makes people feel even more singled out. If someone wants to have a larger discussion about it, they’ll let you know.”

Remaining engaged in the gender conversation as an LGBTQ ally

The decision to come out—or not come out—as gender nonbinary or transgender is deeply personal and unique to each person. No two journeys are the same. For friends and allies, Goldbach summarizes his advice in these simple steps:

1. Ask questions. Show that you are committed to honoring others’ gender identities and using the correct pronouns by taking the time to learn.

2. Share your pronouns. Identify your own gender pronouns, even if you are cisgender or your pronouns seem “obvious” to a group. This effort indicates that you’re aware of gender diversity and want to create a safe space for others.

3. Apologize when appropriate. If you make a gender pronoun mistake, acknowledge it, but don’t inflate the issue.

4. Discuss openly. Foster continual conversation surrounding gender to increase awareness and generate greater dialogue particularly with cisgender people and in spaces that might be uncomfortable.

5. Respect boundaries. Some individuals may feel safer using their true gender pronouns in some spaces than they do in others. Understanding and respecting these boundaries provides support while prioritizing the person’s physical and psychological safety.

“Gender is a core part of our identity and understanding of self,” Goldbach said. “Where and with whom gender identity is shared is an individual choice. What’s important is that we respect these decisions and do our part to create safe, welcoming spaces for all.”