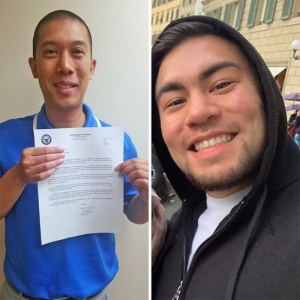 The military social work track of the MSW program at the USC Suzanne Dworak-Peck School of Social Work offers a holistic approach to military social work, opening the door to a myriad of opportunities within the field. Through community engagement opportunities, access to leading military researchers, global partnerships and an interactive, military-focused curriculum, military social work students are equipped with the skills necessary to pursue any range of career paths that involve serving veterans, service members and military families.

For Sherlock Ho, MSW ‘13, and Spencer Vicente, MSW ‘17, both the breadth and depth of the program offered compelling reasons to study military social work. More than anything, Ho and Vicente chose to complete the program because they wanted to give back to those who have dedicated their lives to service.

While studying psychology and history at the University of California, Los Angeles, Ho volunteered at UniCamp, a summer camp for underserved youth, later serving as a program director during his time at USC. “Working with these young people sparked something inside me,” he said. “I wanted to expand my skills to make a greater difference in the lives of underserved populations, and earning my MSW seemed like an ideal way to do so.”

Ho chose to specialize in military social work for a few reasons. “I was interested in investigating the structure of the military and how the systems therein affect service members and veterans,” he said. “I also recognized a number of potentially rewarding career paths that could come [out of studying] military social work.”

Ho cites the connections he made with many of his professors and the knowledge he gleaned from them as the most valuable parts of his time at USC. “Professor Herbert Hatanka helped me develop leadership skills and emphasized the importance of self-advocacy as a social worker—something that can be easy to forget when you’re entrenched in the work of advocating for others,” Ho said. “I also found Professor Kim Finney’s courses rewarding. Her teaching method is very interactive, which was well-suited to my learning style, as well as her very ‘real-life’ approach to treatment. She has been very supportive after graduation as I pursued a commission.”

Following his graduation in 2013, Ho worked for the VA Greater Los Angeles Healthcare System before moving to Colorado in 2017. Ho has spent the last year and a half working for AspenPointe, a community mental health services and treatment center in Colorado Springs, where he works as a clinical social worker, conducting initial assessments with outpatient clients, providing one-on-one psychotherapy, and completing crisis assessments in the community.

Recently, Ho accepted a new role as a commissioned naval officer and will be stationed at Beaufort, South Carolina, where he will have the opportunity to work more directly with military populations. “It’s not yet clear exactly what the role will entail—but it will include a variety of duties,” he said. “Some days may be spent on administrative tasks, while others may be spent helping service members’ children or conducting one-on-one therapy with active military personnel.”

“Regardless of what each day brings, I’m excited for the chance to provide the military with positive coping mechanisms they can use in the midst of their busy military careers and family lives,” he said.

It was in high school that Spencer Vicente first began considering military social work. “I saw a mural painted by a local L.A.-based street artist. On one side, it spotlighted the number of service members who had lost their lives in the current war, and on the other, the number of service members who had comitted suicide,” he said. “I knew then that I wanted to find a way to help those who serve our country.”

After earning his bachelor’s in psychology at Allegheny College in Pennsylvania, Vicente returned to Los Angeles to pursue his MSW at USC. He cites his field placements as among the most integral parts of his experience.

“In my first year, I was placed at a homeless shelter in my hometown of Santa Clarita, where I was able to make a direct impact on my community,” Vicente said. In his second-year internship, Vicente provided free mental health services to service members and military families at the Steven A. Cohen Military Family Clinic at USC. “It was a humbling experience, to say the least,” he said.

These hands-on experiences, paired with the knowledge he gained from his coursework and fellow students, helped Vicente learn about the inner workings of the military. “Most of my classmates on the military social work track were service members, veterans or military-connected students,” he said. “I tried to absorb as much as I could about the military experience from them, since I knew it would equip me to serve military populations more effectively.”

Like Ho, Vicente also praised Finney for the impact she made on his academic experience. “She’s a retired U.S. Air Force officer and psychologist, and applied so many of her real-world experiences to her teachings, which helped to contextualize everything I learned,” he said.

In some ways, Vicente is following in Finney’s footsteps. In June, he accepted a new role as an officer in the Air Force, where he will serve as a clinical social worker. “I’d like to develop my career and eventually earn a doctorate in social work,” he said.

In the longer-term, he is interested in becoming a professor of social work to help enact wider, systemic change in the field. “I want to eradicate the stigma surrounding mental health issues within the military and help ensure that all service members and veterans receive the services they need,” Vicente said.