Reflecting on a Lifetime of Service with Bernice Catherine Harper, MSW ‘48 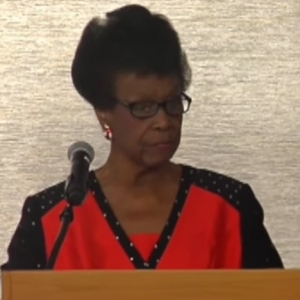 Few people have accomplished as much in a lifetime as nonagenarian Bernice Catherine Harper. She reveals her role models, highlights from her career and her hopes for future generations of social workers.

April is Black Women’s History Month—an opportunity for black women everywhere to reflect on their accomplishments, learn about those who came before and hear the incredible stories of women currently making a difference in their fields.

Bernice Catherine Harper, MSW ‘48, was recently inducted into the California Social Work Hall of Distinction, and has spent her lifetime breaking barriers for women of color. When she decided to pursue a Master of Social Work after graduating from Virginia State College in 1945, there were no MSW programs in her home state that admitted people of color. She attended USC and went on to become one of the first women of color to earn a master's in public health at Harvard University.

We spoke with Harper about the historical role of women in social work, the growth of the profession over the course of her career, and how her African American identity has shaped her experience as a social worker.

USC Suzanne Dworak-Peck School of Social Work: What was the environment for black women like when you were a student? What challenges did you overcome to pursue your degree?

Bernice Harper: As a young person, I wanted to be a missionary to Africa, but I got involved in social work in 1944 or 1945. I actually put myself through college by working for the president of Virginia State College and his wife. They connected me to a Quaker family at Princeton University whom I worked for one summer. The family introduced me to what social work was and, when one of their sisters died and left scholarship money for someone to pursue a degree in social work, they presented that to me.

Society was segregated at the time; there was no graduate school I could attend in the state of Virginia. In fact, I was the first out-of-state student at USC’s Suzanne Dworak-Peck School of Social Work, and the only black female student. In a crowded line during general university registration, a student told me to "go back to Africa." I simply replied, “Africa, Virginia?”

While I was at USC, I wrote a paper about health care and my professor advised me to go into medical social work. After graduating, I applied to work at Johns Hopkins University, but they only accepted one “colored” social worker at a time. So, instead, I went to work at Children's Hospital of Los Angeles, and I stayed there for 10 years.

USC: What were some of the highlights of your career in medical social work?

BH: At CHLA, I worked with asthmatic children, and I proposed a new policy for release time for these patients. I later took on a new position as supervisor of admitting. In this role, I introduced the family clinic card, which was a revolutionary move, and I was selected one of 11 "women of tomorrow."

Another highlight came in 1996, when I was the founding president of the Foundation for Hospice in Sub-Saharan Africa (FHSSA), which has assisted in the creation of nearly 85 hospice partnership programs in 31 cities in the US and 10 countries in Africa and raised over $5 million for these hospices.

USC: Who were your greatest role models as you embarked upon your career?

BH: Among them were Dr. Elizabeth Paine, who was a professor at the USC Suzanne Dworak-Peck School of Social Work; she was a great mentor and role model for me. Other great role models were Ruth Knee, who worked for the federal government as a psychiatric social worker, as well as Dr. Elizabeth Clark and Mark Battle, from NASW, and Elizabeth Rice from the Harvard School of Public Health.

USC: What was it like for a woman of color in the profession, then and now? How has social work as a whole evolved?

BH: Well, affirmative action certainly helped. There has been a significant increase in salary – my first salary was $3,000! Now, the starting salary is more like $40,000.

We as a society have also greatly broadened the concept of social work. For example, hospice care didn't even exist when I started my career. Most social services focused instead on trauma, grief and mourning. Now, social workers are called upon to make the world a better place.

USC: What is your vision for future generations of social workers?

BH: We have to look at what's happening in relation to the urgent issues of our day: immigration, mass murders, mental illness, poverty, homelessness and the environment. I believe the next great revolution will be the "human caring revolution.” It will rely on caring, devotion and deep compassion for others. Social workers should become soldiers of caring — a salve for the complexities and strife of modern life.