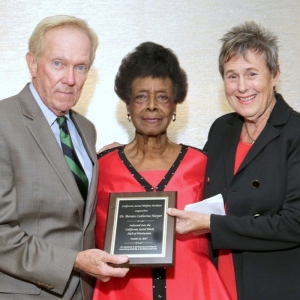 Adding to her extensive honors, a remarkable graduate of the USC Suzanne Dworak-Peck School of Social Work was inducted into the California Social Work Hall of Distinction on Oct. 21. Bernice Catherine Harper, MSW ’48, authored the groundbreaking book Death: The Coping Mechanism of the Health Professional and helped pioneer the hospice movement not only in the United States but also overseas.

The Hall of Distinction is a program within the California Social Welfare Archives (CSWA). As one speaker noted, “History is biographical: if we dig deeply enough, we will learn something about ourselves,” and that sentiment informs the mission of the Hall of Distinction. CSWA president Esther Gillies explained that it was founded in 1979 to ensure the advances and lessons of the profession remain available to future practitioners and researchers.

Among the first women of color to earn a master’s degree in public health at Harvard University, Harper came from extremely humble roots. With 11 siblings, she knew she’d need help to pay for college. She requested an appointment with the president of Virginia State College to ask his advice, and she so impressed him that he housed her in his home while she attended the college. Her Master of Social Work from USC and MPH from Harvard soon followed.

As a home care coordinator and then chief social worker at City of Hope Medical Center in Duarte, California, Harper developed one of the nation’s first oncology social work programs, and in 1970 she was elected president of the American Society of Hospital Social Work Directors. Her book Death: The Coping Mechanism of the Health Professional made an immediate impact in the profession, earned a Better Life Award from the American Health Care Association, and is still being revised and reissued to this day. She has also contributed to other textbooks and scholarly journals.

For the past 30-plus years she has been a Medicare and Medicaid advisor for the U.S. Health and Human Services Department, where a major accomplishment was the adding of hospice benefits into Medicare coverage. She has chaired the National Hospice Organization’s task force on access for minority groups, and in the 1990s she helped launch a hospice foundation for sub-Saharan Africa, especially for AIDS patients. Now known as Global Partners in Care, it has nearly 100 hospices in 15 countries and maintains links with many U.S. hospices. In recognition of her leadership service, the National Association of Social Workers and the National Hospice and Palliative Care Organization raised funds for a scholarship in Harper’s name to support the education of care workers in Africa. She has represented the United States at overseas meetings, such as the International Council on Social Welfare.

Among her many high honors, she was inducted into the National Academies of Sciences, Engineering and Medicine. She also received the NASW Foundation’s Knee/Wittman outstanding achievement award in health policy, the U.S. Health and Human Services Department’s distinguished service award, and dozens of others.

NASW past president and International Federation of Social Workers ambassador Suzanne Dworak-Peck introduced Harper as “a social worker who combines clarity of purpose, the highest standards and determination, with the ability to apply a systematic approach to serving the greater good” and as “a can-do person who represents the strength and caring of social workers who help others cope with the long-term challenges of the human life cycle.” Underscoring Harper’s national impact, Dworak-Peck read aloud a personal letter of congratulations sent to Harper one day earlier by former U.S. President George W. Bush.

After offering a prayer for those suffering from floods, hurricanes and other tragedies, Harper asserted that, regardless of ethnicity or geography, “we’re all related—homed or homeless, tall or short, thin or portly, ill or well.” And she said a new global revolution was under way in which social workers especially would be “called upon to help soldier love, caring, and devotion. “It took 3,000 years to bring us where we are today. The next thing that has to happen is worldwide human caring…Social workers are going to be available to assist to help to make a better world, but not only a better world, but a changed world for human betterment.”

CSWA makes available materials related to social work and social welfare programs in California, including a collection of over 150 oral history interviews with social welfare leaders. Housed at the USC Special Collections Library, the Archives and its Hall of Distinction are supported by the USC Suzanne Dworak-Peck School of Social Work.