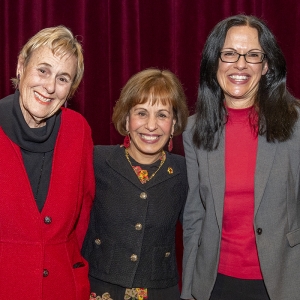 At her first lecture on campus since joining USC in July 2019, President Carol L. Folt opened her master class on resiliency with praise for the USC Suzanne Dworak-Peck School of Social Work.

“This school exemplifies the best of who we are as a university,” Folt said, speaking at USC’s Bovard Auditorium. “This is a school full of people with grit and determination to make the world a better place.” Grit and determination, along with an optimistic attitude toward problem-solving, are key to resiliency, she said.

Over the next hour, she drew upon her personal experiences as well as her scientific background as an ecologist and a one-time art major to talk about the role resiliency plays in both individual and community wellbeing. She fielded questions from social work’s Interim Dean Suzanne Wenzel as well as those attending in person and via the livestream of the event, which included alumni, students, faculty and staff from multiple USC schools as well as members of USC’s Board of Trustees.

Respect for value of social work

“It was a profound honor that President Folt gave her first lecture at USC to the USC Suzanne Dworak-Peck School of Social Work,” Wenzel said. “This was a significant event—a milestone for our school—and a reaffirmation of our value and place among all of our distinguished peer schools at USC.”

For alumna and school namesake Suzanne Dworak-Peck, Folt’s choice to address the school spoke volumes about the significant contribution the school’s community provides, not just to the university but to the surrounding communities, as well as nationally and globally.

“[President Folt] came to USC from a university with a strong school of social work,” Dworak-Peck said. “She knows who we are as social workers, what we do and who we serve.”

Folt’s comprehensive grasp of the principles of social change through her own work as an educator and ecologist interested in social and environmental justice were evident during the master class. The conversation moved in substantive and surprising ways, from the value of optimism and empathy in problem-solving to the connections between protecting the earth and its vulnerable communities.

Like most people, Folt’s life through the decades has had its share of peaks and valleys, and those experiences have taught her to adapt and spring back again and again. “The joys and sadness of life are how we as humans learn resiliency,” she said.

Folt also attributes her scientific training and years of studying resiliency in ecosystems to her own ability to rebound after setbacks. “As researchers, we’re trained to dissect problems and find a path forward,” she said. That approach to problem solving, combined with her naturally optimistic outlook and life experience, sits at the foundation of her own resilient mindset.

The President’s personal perspective and experiences on resiliency as an innate nature one practices and builds over time resonated with alumna Daphne Chien, MSW ’18.

“This topic brings forth the very element of promoting change in our own clients, which is, more often than not, grounded in resiliency and internal strength,” Chien said.

While it is not always easy to be resilient and optimistic in times of turmoil, Folt shared that in difficult times she grounds herself through art and music. Chien could not agree more. “I think [art and music] are remarkable tools for helping ourselves and the people we care about bounce back,” she said.

Fighting for environmental and social justice

Folt recalled the first time she saw the connection between caring for the environment and caring for vulnerable human communities. She was an environmental scientist at Dartmouth College in the 1980s. At the time, the news was filled with stories of communities impacted by chemical and other hazardous waste sites. A few years prior, the federal government had created the Superfund program to clean them up.

Learning about the number of families living near leaking Superfund sites changed her life, she said. Environmentalism, she realized, was not just about protecting the earth, but also intertwined with seeking environmental justice for the poorest communities. It is a problem that still persists today.

According to the Environmental Protection Agency, as of 2016 roughly 16 percent of the U.S. population lives within three miles of a Superfund site, and about 17 percent of all children under age 18.

For Folt, whose prior research took place in pristine streams and watersheds, the call to action was clear. She would focus her research on how the environment could be improved for humans and the ecosystem, specializing in the effects of mercury and arsenic on aquatic life and human health.

That experience illustrated another point Folt made about inspiring students to become researchers. To students, doing research sounds abstract and theoretical—they envision a scholar in an ivory tower, separate from the world. When research is reframed as problem-solving, it becomes an activity grounded in the real world and bringing tangible changes to people’s lives, Folt said.

Resiliency in nature and people

As an ecologist, Folt sees many parallels between resiliency in ecosystems and species, and resiliency in humans. Resilient ecosystems adapt to changes and reorganize following disasters like wildfires and oil spills; resilient humans regroup and bounce back after trauma. Fostering environments that help people recover is often the task of social workers.

The idea that nature’s resiliency holds lessons for those aiming to promote human resiliency intrigued master class attendee Raul Munoz, MSW ’18. “Disasters may permanently damage an ecosystem, yet often times the inhabitants find a way to keep moving forward,” he said. “The same can be applied to people,” he said.

The key, according to Folt, can be found in the collaboration of interdisciplinary work—a specialty at universities in general and USC in particular. She used the example of spiderwebs: nearly invisible designs of hubs and spirals that are strong enough to withstand hurricane winds. For those interested in social change, the webs of connection created by interdisciplinary work solve problems more effectively than work done in silos. An added benefit? “Interdisciplinary work also reinforces community and increases empathy and understanding,” Folt said.

Wenzel was inspired and impressed with Folt’s eloquence in illustrating commonalities and connections across fields on the theme of resiliency.

“It speaks to how we can learn from each other and advance justice, equity and wellbeing through collaboration,” Wenzel said.  These are goals that ecologists, social workers and all those interested in making the world a better place can agree upon. 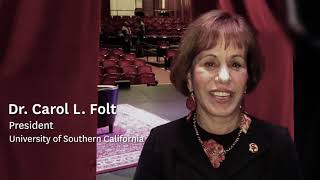 A Message from President Carol L. Folt following her master class with the USC Suzanne Dworak-Peck School of Social Work