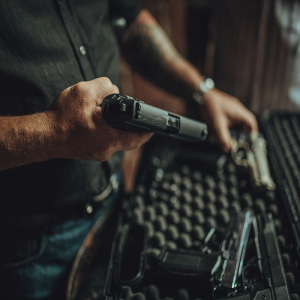 The U.S. has seen multiple mass violence events perpetrated by military veterans: Thousand Oaks, California; Dallas, Texas; Baton Rouge, Louisiana; Charlottesville, Virginia. Understanding the factors that lead to these terrifying events—and why members of the military may be susceptible to extremist beliefs—may help prevent future violence by veterans and others.

That’s the goal for Carl Castro, director of the Center for Innovation and Research on Veterans & Military Families (CIR) at the USC Suzanne Dworak-Peck School of Social Work, and research associate professor Hazel Atuel, who have been awarded a three-year, $1.6 million grant by the National Institute of Justice (NIJ). Their research will focus on how extremist views grow within military members and veterans, ultimately informing development of an assessment tool to identify former military service members who are at risk for engaging with homegrown violent extremism. This is the first such study focused specifically on military veterans funded by NIJ.

Castro anticipates that the research will help veterans while also informing how we think about military transitions to civilian life. “I think about radicalization as the worst type of outcome for those who have served,” he said. “These individuals have raised their hand to serve our country and I hate to see their life and career end this way.”

Tracing their actions, affiliations and more thorough data analysis and interviews with family and friends may help illuminate key points where radicalization occurs. The project comprises two studies: an analysis of data collected about individuals indicted or convicted of domestic terrorism from 1980 to 2002 and interviews with the friends, families and social networks of veterans and civilians who engaged in homegrown violent extremism from 2003 to 2019.

This multi-decade look at military veteran extremism will be used to inform development of a risk assessment tool that could be used by civilian law enforcement and military agencies to help identify those at greater risk of violence.

For Atuel, the seeds of the study were planted in her mind about four years ago, when two separate mass shooting incidents by military veterans with extremist views targeted police officers in Dallas and Baton Rouge. As many sought to understand what kind of person takes such violent action after two such incidents in less than two weeks, Atuel and Castro began to consider motivating factors, and hypothesized that identity—or the ways in which people belong to groups that become sources of their self-definition and beliefs—plays into the process of radicalization.

Atuel hopes that their research will fill a gap that currently exists in the research literature about the factors that may drive military service members toward extreme ideologies and behaviors.

“It’s a conversation we need to have,” Atuel said. “Planning for mass violence happens in someone’s backyard,” she said. The more we are aware of risk factors, the more likely we will be to spot early behaviors and intervene.

Research to illuminate the connection between former military service and mass violence may also shed light on what leads to radicalization of veterans and civilians alike.

“If we identify aspects that lead to radicalization, this study will have applications beyond military veterans,” Castro said. “This will tell us a lot about how extremist views take hold of a person as they transition from a military culture to a civilian one.” This may also lead to a greater understanding of how radicalization occurs when one makes cultural shifts, such as from religious culture to a secular one.

Understanding why military service members may be especially vulnerable to radicalization may unlock solutions as to what can be done to counteract extremism on the ground.