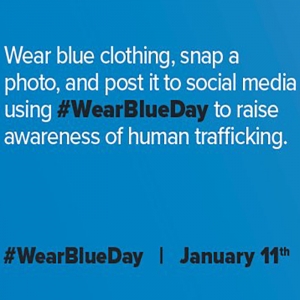 Human trafficking is an egregious crime against humanity that takes many forms and too often is overlooked. In our contemporary society, it is an embarrassment that this commodification of young women and men continues. It dehumanizes us all.

In 2010, January was declared National Human Trafficking Prevention Month, a time to raise awareness of the crime of human trafficking, also termed “modern day slavery” by the U.S. Department of State. As social workers, we have a responsibility to recognize human trafficking, report it, help others to recognize it, and support those who are or have been affected by it. By working together, we can shine a light on this global crisis and help end it.

As a social work community, we can aid recognition of human trafficking by participating in #WearBlueDay on Tuesday, January 11, 2022. It simply involves wearing a piece of blue clothing and posting about it on social media using the hashtag. I urge everyone in the Suzanne Dworak-Peck School of Social Work community to recognize the 25 million women and men worldwide estimated by the International Labor Organization of the United Nations to be trapped by human trafficking. Let us send a message through a sea of blue across our school, university campus, and social media platforms.

Anyone can become a target for human trafficking. The signs of human trafficking can be subtle and even be masked as legitimate jobs or love relationships, with those exploited unaware of what is happening until it is too late. According to the United Nations’ 2020 Global Report on Trafficking in Persons, sexual exploitation accounts for 50% of those who are trafficked worldwide and for 38% by forced labor. Women and girls continue to be particularly affected, collectively 46% of overall trafficking. One third of trafficked individuals are children, and 20% are adult men.

Our school is fortunate to have two experts on faculty, clinical associate professors Holly Priebe Sotelo and Annalisa Enrile, who are dedicated to the eradication of human trafficking. They are helping to prepare the next generation of social work leaders to tackle this crisis. Sotelo says those who are affected by human trafficking are often hidden in plain sight and do not see themselves as victims. “It is happening in every neighborhood, including yours. When it involves minors, this is a severe form of child abuse and must be reported,” she said.

The global industry of human trafficking generates $150 billion annually and includes an estimated 14,000 to 17,000 individuals who are trafficked into the United States each year, as reported by the U.S. Department of State Office to Monitor and Combat Trafficking in Persons. This puts emphasis on our country’s need to recognize, prevent, and protect those affected by human trafficking, and prosecute traffickers. It also charges us all to foster change within our own communities. In other words, it is not someone else’s problem.

#WearBlueDay affords us the opportunity to raise awareness and help stop trafficking. It fits perfectly with the mission of the Suzanne Dworak-Peck School of Social Work. Please begin the new year by joining this movement to eradicate an injustice that has plagued society for far too long.