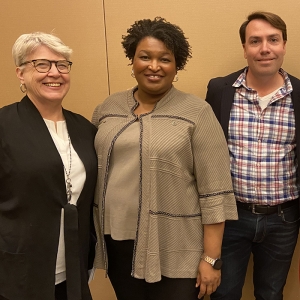 To prove it is more than theory, they have compiled essays from national experts on this issue which they hope will influence the conversation around homelessness in the 2020 U.S. presidential campaign and beyond.

“Our goal was to give [the candidates] some food for thought,” Henwood said. “We reached out to experts in the field to give some guidance on what they think are some research-informed policy positions so that there can be evidence-based policymaking.”

The goal is for the proposals in these essays to get people talking and put more pressure on the candidates to clearly commit to where they stand on the issue of homelessness and address it on the national stage.

The proposal is also intended to be a resource to policymakers more broadly. During a recent trip to Washington D.C., Henwood and Padgett were able to hand-deliver the essays to politician Stacy Abrams, the former House of Representatives member and gubernatorial nominee for Georgia.

Experts were asked to write what they thought would move the needle on homelessness. Some focused on specific parts of the population, such as older adults and youth, while others talked overarching issues, such as racial inequities.

“We were trying to get short essays written from a lot of points of view about how one might think about this problem,” Henwood said. The essays can help raise awareness on this issue, and hopefully become a place where candidates and policymakers can go to help formulate their policy positions.

“This could be a reference guide,” Henwood said. “We weren’t expecting Elizabeth Warren was going to read this whole thing, although actually, she might.”

According to the essays, the challenge is to expand proven approaches that have worked in communities, develop new service innovations and technologies and adopt policies that promote affordable housing and basic income security. The authors of the essays, all nationally known experts on the topic, demonstrate how an end to this decades-long crisis of homelessness can be achieved.

“For the most part, a lot of what’s contained in there is less about what a particular program can do and more on how we need to rethink broader solutions,” Henwood said.

The essays demonstrate that there are larger issues in play that are pushing more and more people into homelessness. There are solutions that are proven to work that need to be done more, and others that need to be reevaluated for their efficacy.

One of the essays addresses the growing aging homeless population. The amount of healthcare this particular group stands to use is more than what it would cost to provide housing and some support services instead. Studies have shown that using healthcare dollars to get people off the street is more efficient than spending that money later.

Another essay, written by economists, states that it does not matter what the homeless system does unless we rethink the issue of inequality; that inequality is driving the issue.

“We’re not saying there’s a one-size fits all,” Henwood said. “There are definitely some key takeaways and different ideas on what we need to do. The question is, ‘how are candidates thinking about it?’”

The essays highlight that a great deal is known about this issue—why it is exists, what drives it and what can help fix it. Some of it is rethinking the problem, some of it is just purely political will.

“We do know quite a bit and it is relevant to the election,” Henwood said.

Henwood, a former Wall Street trader, obtained his PhD in social work because he wanted to concentrate on the research and policy angle of attacking homelessness as a meaningful second career. He relocated to Los Angeles from New York, believing that USC was the place to continue his research on homelessness.

He recently launched the Center for Homelessness, Housing and Health Equity Research (H3E) within the USC Suzanne Dworak-Peck School of Social Work, adding to the university’s extensive research initiatives on homelessness. Henwood’s goal for the center is for the research to reveal what good quality care looks like for those experiencing homelessness, and to be a focal point for other researchers to collaborate.

“We also want to support the school’s educational goals of producing well-trained graduates that can make a difference,” Henwood said. Part of what he has initiated, and which will continue under the umbrella of the center, is enhanced field placements that help students better understand evidence-based solutions, and promote and inspire them to work in this field.

Henwood believes the work he and his colleagues are doing in social work will complement other efforts at the University including the Homeless Policy Research Institute at the Sol Price School of Public Policy and a university-wide Initiative to Eliminate Homelessness. He hopes to use the data collected through the Center’s work to illuminate and address some of the less publicized, but equally legitimate problems within the homeless community.

As the data administrators for the annual Greater Los Angeles Homeless Count, additional analyzes show that about 10% of the homeless population has a pet. Why is this important? Because most shelters do not have pet friendly policies and often individuals experiencing homelessness are refused services because they would be required to separate from their pets.

“I think the issue of it is not just about the numbers,” Henwood said. “The research we do involves engaging people on the street, and we want them to have the best services possible.”