Why Mental Health Care is Stigmatized in Black Communities 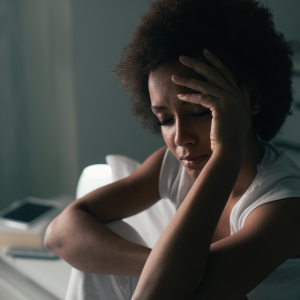 According to the World Health Organization (WHO), one in four people will struggle with a mental illness at some point during their lives.

In black communities, reluctance to seek both physical and mental health care can often be attributed to a general distrust of the medical establishment. This distrust is not without merit: historically, African Americans have been misdiagnosed at higher rates than white patients, and black communities have been exploited by the U.S. government and medical community in the name of medical advancement.

At the same time, seeking mental health care is often viewed as a weakness, running counter to the survivalist mentality born from systemic oppression and chronic racism. “Much of the pushback against seeking treatment stems from ideas along the lines of: We have survived so much adversity and now someone is going to say that there's something wrong with us,” said White.

White also cites the phenomenon of religiosity that permeates many African American communities. Studies by the Pew Research Center reveal that African Americans are among the most religious of any racial or ethnic group in the United States, with 87 percent reporting a formal religious affiliation. As such, White said, prayer and faith are often seen as a salve for mental health woes and may be favored over formal medical treatment.

Finally, White points to the phenomenon of criminalization of African American behavior, which she frames within the context of the American justice system. Although blacks account for just 13 percent of the adult population in the U.S., they make up 33 percent of the sentenced prison population, while whites—who represent 61 percent of the nation’s population—represent only 30 percent of all prisoners. This disparity has stoked the fear that openly acknowledging mental health struggles will be met with harsh legal repercussions rather than needed treatment: “If an African American person with a mental illness acts out in violence, they are much more likely to be criminalized than to be given the opportunity to receive mental health care,” White said.

Overcoming the Mental Health Stigma by Shifting our Cultural Narrative

“It’s crucial that we tell stories that prove that people can overcome mental illness and lead rich, fulfilling, successful lives. This requires a shift in the way we portray mental illness in film, TV shows and the media as a whole,” White said.

White, who has written about the representation of mental illness in popular media, hopes that mental health care can be reframed to mirror our cultural perceptions of physical health care—as diagnosable, treatable and non-debilitating. She praises celebrities such as Jay-Z, Kerry Washington, Michelle Obama and Gabrielle Union for speaking openly about their positive experiences with therapy and counseling, hoping that these conversations will help to make mental health awareness and acceptance the cultural norm.

She also champions culturally competent care—treatment specifically designed for marginalized populations and led by practitioners who have a firsthand understanding of the unique challenges facing minority communities. She cites Therapy For Black Girls, Henry Health and the forthcoming Ayana Therapy online platform—which focuses on people of color, LGTBQ communities and the intersectionality between them—as examples of organizations committed to increasing access to culturally competent care.

In addition to shifting the cultural narratives surrounding mental health, the practical considerations of cost and access to care must be considered. Today, there is a critical shortage of practitioners that disproportionately affects people of color, while prohibitive insurance and health care costs often make it more challenging for low-income individuals to access needed treatment. This has an outsize impact on African Americans, who have among the lowest rates of health care insurance of any ethnic group.

“As a country, we need to make meaningful policy changes that will increase mental health care access for people of color so fewer African Americans will go without the treatment they need,” White said.

“If we can raise awareness surrounding mental health from a young age, we can break stigmas and shape this generation to approach mental health in a new, positive way,” she said.