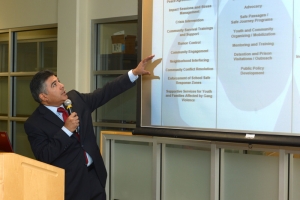 Rep. Tony Cardenas never thought he would become an elected official. Growing up Latino as one of 11 siblings in a low-income household in Pacoima, Calif., Cardenas didn’t think public office was in the cards for him, even when a friend suggested otherwise.

But when Cardenas realized that outsiders had always represented his community, he knew it was time that someone “like him” should represent his own. Cardenas would go on to serve in the California State Assembly, Los Angeles City Council and U.S. House of Representatives, where he currently serves.

Because he grew up in an area where gang activity and violence were prevalent, it was a no-brainer for Cardenas to take on juvenile justice reform, and gang intervention and prevention. He recounted a story for USC students in which his sisters were bystanders in a drive-by shooting, many years ago.

“The bullet went right over one of my sisters’ heads and killed our neighbor and friend,” he said. “I thought about that when I started juvenile justice reform. That kind of thing wasn’t happening a lot back then, but by the time I was an assemblyman, lots of kids were getting killed like that.”

He went on in 2000 to co-author and successfully pass the Schiff-Cardenas Juvenile Justice Crime Prevention Act, which addressed rising incarceration costs by supporting youth development services and programming to reduce juvenile crime throughout California.

When he was later elected to the Los Angeles City Council, he chaired the city’s Ad Hoc Committee on Gang Violence and Youth Development, bringing in Hernandez, MSW ’07, who specializes in working with vulnerable youth populations and was then working with Communities in Schools, a dropout prevention program, to consult on ways to reduce juvenile crime using a social work lens. Out of that collaboration came the Community-Based Gang Intervention Model, which defined and standardized methods used by gang intervention workers to help stop violence in some of Los Angeles' most dangerous neighborhoods. The model, which was adopted by the City Council in 2008, offers a holistic two-prong approach: specialized, hardcore street- and prison-based interventions, and individual and family social services.

For the past six years, Cardenas has worked with Hernandez, as well as his students, to better understand the role social workers and other interventionists play in preventing crime and gang activity among at-risk youth. In fact, Hernandez said that Cardenas has used his students’ work in this gang intervention class as a kind of think tank for policymaking.

“We don’t just look at the typology of gangs – how they form and operate. We look at the structural systems that affect communities. We look beyond the tattoos,” Hernandez said. “It’s about getting to the root of the issue. I call them ‘vulnerable youth populations,’ not gangs.”

In Hernandez’s class, which traditionally has been geared toward undergraduates, students examine research, policy and practice on adolescent gang intervention, looking for strengths and weaknesses in recommending strategies on how best to serve these youth. These students, who are studying everything from law and real estate to psychology and sociology, look at these factors at the local, state, federal and international levels, with their final papers containing best practices recommendations for Cardenas.

Jennifer Shishido, an undergraduate majoring in sociology with a pre-law emphasis, said that she took this class with the goal of broadening her perspective on politics and the law, as she hopes to become an attorney one day.

“This class is one of the best classes I have ever taken in my undergraduate career,” she said. “We got to meet real interventionists, ex-gang members, and go on site to places like Homeboy Industries. Getting to see and interact with the people who go through this on a day-to-day basis – people who have been incarcerated, in poverty, injured, etc. from gangs – makes it so much more meaningful and real.”

Shishido said that through this class she learned more than just facts; she learned about her own potential, too.

“One thing that really stuck with me from the class and Cardenas was that we are the ones who will be making policy and decisions, and effecting change one day. It’s really an inspiring and empowering feeling to have as a student,” she said.

In fact, some of Hernandez’s students’ work has already been featured front-and-center in Los Angeles city policymaking efforts. In 2009, Candace Kaminsky, who took this class as an undergraduate psychology student and later earned a Master of Social Work from the USC School of Social Work, interned with Cardenas’ office and had a significant role in writing a report for the city’s ad hoc committee on then-Mayor Antonio Villaraigosa’s Gang Reduction and Youth Development (GRYD) Office. She even presented the report at a meeting of the City Council’s public safety committee.

Cardenas said he is committed to incorporating evidence-based solutions in his gang intervention and violence prevention initiatives, and that includes an important role for social workers.

“Police are not trained to get to the root of the problem. They’re trained to stop violence as it’s occurring. Social workers are trained how to fix, help, solve problems, to teach people how to live without violence,” he said.

Cardenas’ words rung true with MSW student Hector Cendejas, who made a special trip to campus to hear Cardenas speak, even receiving permission from his field placement at Rep. Karen Bass’ office to attend the event. Cendejas, who has his own political aspirations and serves as president of the school’s Student Organization, said that he appreciated the congressman’s connection to his community and finds that understanding at the local level to be effective in advocating for others.

“The world of politics has its challenges, but we need people who have a passion in advocating for social justice to create change,” Cendejas said. “What I took away from the discussion is that social workers are needed to make changes at the macro level. With the skills we’ve learned, we provide this different perspective that can help improve the needs of the community.”

Cardenas emphasized the role these USC students can play in effecting that kind of lasting change.

“What can you do as students? Learn it, question it, improve it. If it doesn’t seem right, say something,” Cardenas said. “Your job is to be critical, to challenge, to push to make something better. You are change makers.”