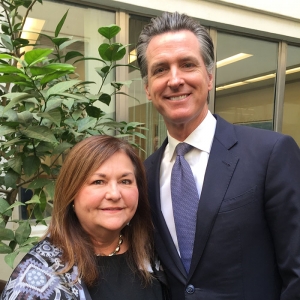 María Aranda remembers her surprise the first time she heard her father tell others that he had Alzheimer’s disease.

As a researcher and experienced social worker, Aranda, executive director of the USC Edward R. Roybal Institute on Aging, has seen firsthand how many people fear the stigma that they believe comes with the disease and try to conceal their symptoms.

But not her father.

When she asked him why he was so open about it, his answer was simple. “If I don’t tell people, how do I expect to get help?” he told her.

Aranda, associate professor at the USC Suzanne Dworak-Peck School of Social Work with a joint appointment at the USC Leonard Davis School of Gerontology, said her father’s blunt honesty got her thinking about the need for broad public discussion about Alzheimer’s and other diseases that affect brain health and what steps everyone can take to help.

When California Governor Gavin Newsom appointed her to his Alzheimer’s Prevention and Preparedness Task Force this fall, she suddenly had a new platform for doing this work.

Focusing the state on prevention

Chaired by former first lady Maria Shriver, the governor’s Alzheimer’s Prevention and Preparedness Task Force will recommend how California’s communities, organizations, businesses, governments and families can help prepare for and prevent an expected surge in cases of Alzheimer’s disease and related dementias. It is the first statewide task force to tackle the issue and has broad, bipartisan support.

The task force comprises a diverse group of caregivers, health service providers, researchers, innovators, affected families and media professionals. The group first met in November as part of national Alzheimer’s Awareness Month and plans on convening listening sessions throughout the state to capture multiple perspectives. The task force will be responsible for releasing a report in the fall of 2020, coinciding with the state's overall master plan on aging.

“I’m honored to be a part of this effort to engage with people across the state, to overcome the stigma of Alzheimer’s and related dementias, and to help the state and local agencies meet the growing need,” Aranda said. “It’s time for out-of-the-box solutions.”

Aranda also sees an opportunity to expand and deepen USC’s research, teaching and engagement related to Alzheimer’s and related dementias. The interdisciplinary nature of the task force, combined with the statewide listening sessions that aim to bring a variety of perspectives, will build understanding and create opportunities for further collaboration between USC and others statewide.

Aranda plans to use her role to shine a spotlight on the depth and breadth of USC’s Alzheimer’s-related research, which involves a cross-collaboration of scientists from biological and computational sciences, economics, environmental science, genetics, gerontology, medicine, neuroscience, psychology, policy and social work.

“Broad approaches to prevention and treatment will depend on interdisciplinary collaboration,” Aranda said. “I’m proud to represent USC in this effort to increase awareness of this disease and its impact as well as help shape the state policies we will need to address its long-term impact.”

As California’s older adult population grows, Alzheimer’s is on pace to increase by more than 29 percent over the next five years, according to the Alzheimer’s Association.

According to Aranda, Alzheimer’s impact on long-term healthcare services, families and caregiving individuals could become overwhelming, with the number of Californians age 65 and older with Alzheimer’s growing from 670,000 in 2018 to 840,000 by 2025, more than in any other state.

“We must not only work to find cures, but also to promote prevention through healthy lifestyle habits,” Aranda said. “Local action is critical and we all have a role to play.”

Groundbreaking work with under represented communities

Aranda’s expertise in Alzheimer’s and its current impact on families and communities is informed by her work as director of the outreach, recruitment and engagement core of the Alzheimer’s Disease Research Center at USC, funded by the National Institute on Aging. With grant funding from NIA, the Alzheimer’s Association and Us Against Alzheimer’s, Aranda conducts a scientific training program for emerging scholars in the field of health disparities, using interdisciplinary, team-based approaches to address Alzheimer’s and related dementias while exploring the differences in health and health care between races, ethnicities and other population groups.

Her work in the Latino community is recognized by many as groundbreaking and impactful. She developed the nation’s first Spanish-language support group for families affected by Alzheimer’s. Her establishment of model support programs such as the El Portal Latino Alzheimer’s Project, Programa Esperanza and Siempre Viva has helped families deal with depression and Alzheimer’s.