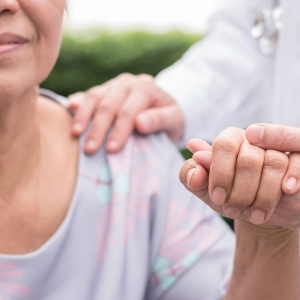 Support from the National Institute on Aging and others helps early career researchers connect with mentors, community funding opportunities and resources.

Some days while caring for her elderly parents with Alzheimer’s disease, Mico Borders had a hard time getting out of bed.

“Every day was daunting,” she said. Not knowing what to expect each day as the disease progressed added to the stress.

Borders’ ground-level experience as a family caregiver—and her more recent work trying to help other caregivers—was a unique part of a scientific training incubator for emerging scholars that took place at the USC Suzanne Dworak-Peck School of Social Work on October 24-25, 2019, led by the USC Edward R. Roybal Institute on Aging.

For Borders, hearing what researchers are doing to address Alzheimer’s was just as meaningful as being able to share her own experiences with them.

“I’m grateful to know how researchers are making a difference in people’s lives,” Borders said.

Understanding the people behind the data

Creating space for this kind of direct impact experience within the training framework is key for Maria Aranda, associate professor at the USC Suzanne Dworak-Peck School of Social Work and the USC Leonard Davis School of Gerontology. She designed this scientific training opportunity to provide ongoing career development opportunities to 10 emerging scholars, using interdisciplinary, team-based approaches to address Alzheimer’s disease and related dementias while exploring the differences in health and health care between races, ethnicities and other population groups.

“To do this research well, we have to know why it matters,” said Aranda, who also directs the USC Edward R. Roybal Institute on Aging. She knew from the start that she wanted to include a number of caregivers such as Borders to speak directly to the scholars.

“Let’s not forget who this research is for,” she said. “Behind every datum is a person.”

For David Camacho, MSW MSG ’10, the perspectives of the real-world caregivers reminded him of why he began down the path of aging and health disparity research. He too served as a caregiver for his aging parents for 15 years. After they had passed away, he returned to school to earn a PhD. Today, he brings that emotional knowledge and awareness to his research.

As a post-doctoral fellow in the department of geriatrics and palliative care at Weill Cornell Medicine, Camacho focuses his research agenda on reducing suffering among aging adults, guided by his experiences as a caregiver and a clinical social worker.

Camacho came to the event interested to learn more about how to navigate grant funding applications and opportunities as well as explore new ideas for research in the field of cognitive impairment.

Caring for his parents gave him firsthand experience of the loneliness and depression that can come with aging and illness. He hopes to find ways to help ease that suffering through better training for social workers, family members and caregivers.

“This training program is such a supportive environment, all with the goal I share of helping older adults reduce their suffering,” Camacho said.

In addition to two intensive training sessions, each of the 10 scholars are linked to a senior mentor who is committed to meeting with them monthly, making career assessments and helping establish goals. Funding for the program is provided by the National Institute on Aging, the Alzheimer’s Association and UsAgainstAlzheimer’s.

For Cerise Elliott of the National Institute on Aging (NIA) and Carl V. Hill of the Alzheimer’s Association, the idea for a scientific training program for emerging scholars in the field of health disparities took shape about 18 months ago.

“We could see the clear need to build a cohort of researchers working on these issues,” said Elliott, who is a program director for the Dementias of Aging Branch of the Division of Neuroscience at NIA.

Elliott and Hill, who is vice president of scientific engagement for the Alzheimer’s Association, encouraged Aranda to apply for funding for a training program, and she delivered a proposal that incorporated opportunities for networking, knowledge sharing, mentorship, and something unique: the integration of real and authentic voices from family caregivers.

Just weeks before the training took place, the need for additional support for researchers pursuing health disparities studies was crystallized in a report published by National Institute of Health (NIH) scientists in the October 2019 journal Science Advances. This report found that black researchers as a group are more likely to propose research topics that are “systematically disfavored” by reviewers—such as health disparities—and less likely to receive National Institute of Health research project (R01) grants. The findings suggest that more work needs to be done in looking at why some research topics are less likely to be funded than others as well as why black researchers are less likely to receive funding than their white counterparts. A different NIH study also found disparities in funding for research on Asian Americans and Native Hawaiian/Pacific Islanders.

“We have a long way to go toward offering opportunities for health disparities research, which is arguably the most important biomedical research since it focuses on the populations who are most at-risk,” Hill said. “But this collaboration between the Alzheimer’s Association, NIA and USC is a good start for aging researchers with this interest and passion.”

“If we find a cure, it must be applicable to all groups,” Aranda said. Not just those with better access to care, but also those living in poverty. “If we’re only looking at white, educated people in our research and clinical trials, will we find a cure that works for all?”

Preparing for the coming wave

The expected impact of Alzheimer’s on aging Latinos and African Americans is high.

“We know these minority groups are 1.5 to 2 times more likely than white people to get Alzheimer’s or related dementias,” Aranda said. “By 2060, up to half of the Alzheimer’s population will be Latino or African American.”

Yet, little research is being done within Alzheimer’s that looks at these population groups specifically.

“Less than five percent of all clinical research in this field is about people who are not white and highly educated,” Aranda said.

It’s a gap that shouldn’t be ignored. Aranda worries that a narrow focus on one group without taking into account the differences in health and health care received by all groups may limit the success of any cure that is ultimately found.

A cure for all

Aranda’s concern is shared by caregiver Nora Manzanilla, who spoke to the scholars as well. As caregiver for her 91-year-old mother with end-stage Alzheimer’s, she sees the need for educational materials about the disease and its progression for all of Los Angeles’ diverse communities.

Her work in tobacco control and prevention for the City of Los Angeles has meant that Manzanilla spends a lot of time thinking about how to make public health information accessible and understandable. Gaps in education about Alzheimer’s effects—within the Latino population, government agencies, healthcare providers and others—are made clear to her every day she tries to support her mother and manage the disease’s unique symptoms.

“I understand the difficulty in recruitment and retention of underrepresented ethnically diverse populations,” she said. “But the value is so significant especially if it leads to changes in health policy but more importantly equitable, respectful, understandable quality care and services for patients with Alzheimer’s, caregivers and their family members.”

In her keynote address to the scholars, neuropsychologist Jennifer Manly spoke of her own experience in taking her research to the neighborhoods she wants to help. Incorporating home visits into her studies, instead of asking subjects to come to her, demands more time and resources. Yet the extra step is worth it because it ensures greater participation from a more diverse group.

A professor of neuropsychology in neurology at the Gertrude H. Sergievsky Center and the Taub Institute for Research in Aging and Alzheimer’s Disease at Columbia University, Manly focuses her research on how people’s cultural experiences—especially the quality of their early education—affect their brains as they age.

“I’ve been to a lot of these types of events, and there is no other meeting like this, with its emphasis on mentoring and inclusion of community experts who talk about the caregiving experience,” Manly said.

Manly serves as a mentor to one of the emerging scholars. She hopes to increase the amount of research being done on health disparities by helping young scientists interested in the field to crack the code of grant applications.

“I think this new format will have a huge impact on how events like this are organized in the future. It should be a template for othersl,” she said.