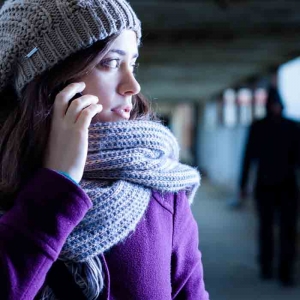 Unwanted phone calls or texts? Threats of violence or blackmail? If this sounds familiar, you might be a victim of stalking.

Whether in person or on the internet, being stalked is a uniquely terrifying and isolating experience. Victims may be afraid to report their stalker out of fear of retaliation, or be unsure where the dividing line falls between innocent behavior and obsessive, potentially dangerous tendencies.

Licensed clinical social worker Jessica Klein specializes in trauma treatment grounded in neurobiological research, and works with sexual assault victims at every stage of their journey — from crisis intervention to individual and group therapy. Klein’s understanding of sexual trauma provides insight into the role that stalking plays in sexual violence.

USC Suzanne Dworak-Peck School of Social Work: First off, how do you define stalking? Between whom (strangers, friends, romantic partners, etc.) does it most often occur?

Jessica Klein: We define stalking as unwanted or obsessive behavior toward an individual intended to frighten or coerce. This can include bombarding the individual with texts, emails, phone calls or gifts, showing up at someone’s house or workplace, explicit or implicit threats, blackmail, or even sexual assault.

We often speak of stalking in a heteronormative framework, with the man stalking the woman, but it can certainly happen the other way around. And it can happen in gay, lesbian and transgender relationships as well. Stalking can happen as part of the cycle of intimate partner violence, serving as another way to control a victim and establish dominance over that person. But it can occur in platonic relationships, too.

Victims of stalking often don’t know they’re being stalked. Many of the behaviors of stalking — getting texts or phone calls from someone, for example — aren’t problematic in and of themselves. But in the context of obsessive or repetitive behavior, those actions definitely qualify. The term “stalking” is thrown around so lightly these days: “I met this cute guy, and I totally stalked him online.” But true stalking can be incredibly scary for the victim.

USC: How do cyberstalking and social media factor into this discussion? Has the prevalence of social media actually made it easier for these behaviors to proliferate?

JK: Social media is a tool, like anything else. You can use it to keep tabs on your friends, but you can also use it to make someone’s life miserable. Social media enables an unprecedented amount of access to people’s photos, whereabouts and dating history. On social sites, you can send one compromising photo to thousands of people at once, greatly amplifying the threat of blackmail.

When we talk about cyberstalking, we need to be careful not to victim-blame; but at the same time, young men and women absolutely need to know how to make good decisions with the information they put on the internet. Unfortunately, anything you post that’s publicly visible — or anything you send privately via text or message app — can be used against you.

USC: The concept of victim-blaming is interesting in this context. In cases of sexual assault, women are often reluctant to speak up for fear of being blamed or shamed for the event. Do you see a parallel between stalking and sexual assault in this regard?

JK: There are parallels between stalking and all kinds of sexual or gender-based violence. Generally speaking, our culture socializes girls to be nice and boys to be assertive. Women who are being stalked often don’t want to be rude, even if the behavior makes them uncomfortable — so they struggle to set appropriate limits. It’s also easy for victims to dismiss the behavior or experience feelings of guilt or self-blame.

Many aspects of our culture, including popular romantic comedies, have taught us the notion that persistence is a virtue that’s often rewarded. How many movies follow this general plotline: a woman rejects a suitor, he pursues her and shows her how perfect they are together, and they ride off into the sunset. But this belief can be very dangerous when it’s applied in the real world. It normalizes obsessive behavior as part of courtship or breakups, making it harder for women to speak up when things get out of hand.

USC: What should you do when you are being stalked or if someone has developed an unhealthy obsession with you?

JK: It can be hard to assess when exactly an interaction has crossed the line into stalking. Victims often second-guess themselves or believe they’re overreacting. Eventually, the barrage of attention can become traumatic, which makes day-to-day functioning — and getting help — all that much more difficult.

The first thing to do if you think you’re being stalked is to break the hold of isolation by seeking help. Share what’s happening with someone you trust, such as a family member, friend or pastor. Work with that person to document as much evidence of stalking behavior as you can — phone calls, texts, emails and unwanted visits — and take that information to your HR department or the police, depending on the situation. It can feel like a huge risk to speak up, but that really is the first step to ending the abuse.

If you’re not sure who to turn to, there are many valuable online resources, such as RAINN, where you can seek guidance and emotional support.