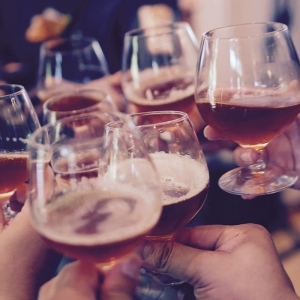 A system dynamics model for drinking patterns reveals the impact of both social and environmental factors on an individual’s risk for binge drinking.

In recent years, rates of binge drinking have been on the rise in the United States. According to the National Institute on Alcohol Abuse and Alcoholism (NIAAA), binge drinking is “a pattern of drinking that brings blood alcohol concentration (BAC) levels to 0.08 g/dL. This typically occurs after 4 drinks for women and 5 drinks for men—in about 2 hours.”

From 2005 to 2012, binge drinking rose nearly 9 percent, according to the American Journal for Public Health, and 17%  percent of the U.S. population reports binge drinking multiple times per year. Today, binge drinking is the most dangerous, costly and common form of excessive alcohol consumption.

Yet much of the existing body of research on alcohol use has focused on the factors contributing to chronic, long-term alcohol abuse rather than isolated binge drinking events—even though it has been proven that some 60% of drinking-related issues, from vehicular accidents and fires to sexual assault and violent crime, occur at the acute level of alcohol consumption.

In recognition of National Drug and Alcohol Facts Week, John D. Clapp, social work professor and interim dean at the USC Suzanne Dworak-Peck School of Social Work, shed light on the complex interplay of social and environmental factors that influence one’s likelihood to binge drink. Clapp, who specializes in research on drug and alcohol use, collaborated with a group of engineers and researchers to create a sophisticated model of behavior at drinking events to explore these factors as never before.

“The world of drug and alcohol research traditionally examines one part of an overall system, independently of—or controlling for—everything else,” said Clapp. “Social work, on the other hand, approaches problems from a holistic perspective by drawing out the relationships between different elements within a system.”

Clapp recognized a disconnect between the way drug and alcohol use research had traditionally been conducted, and the many interconnected factors at play in an actual binge drinking scenario. Clapp believes that if we are interested in explaining why incidents such as falls, fires, accidents, violence and assault happen at disproportionately high rates in the wake of binge drinking, we need a model that combines both the mathematical precision of traditional drug research with the ecological approach of social work.

Through a collaboration with system dynamics engineers, Clapp was able to build a new dynamical model of drinking rooted in social science theory and historical data. This model examines three categories: the personal biological and psychological factors that affect both how an individual metabolizes alcohol as well as their social drinking behaviors; the social factors that influence drinking behaviors; and finally, the environmental factors at play during a drinking event. As such, the team is able to adjust various factors to model rates of intoxication on both individual and group levels.

The factors that influence the decision to binge drink

Clapp and his team have been surprised by some of the findings that the dynamical model has enabled, due in large part to its flexible parameters.

For instance, he said, “previous research on social drinking patterns has revealed that those who do not typically drink heavily tend to drink more heavily in the presence of a person who drinks to excess. However, since we can control for and manipulate more factors, we have found that increasing the price of alcoholic beverages within the same setting can offset the social effects of a heavy drinker in the midst of non-heavy drinkers.”

One of the major implications of the team’s research relates to access to alcohol within various settings. As an example, they found that people were less likely to binge drink at house parties with centralized sources of alcohol, such as a keg, than they were at a “BYOB” (“bring your own beer”) party, where participants were expected to bring enough alcoholic beverages for themselves and others to consume.

Clapp and his team also stress the significance of groupthink in shaping drinking behaviors. “When people go out with the intention of drinking with other like-minded people, the likelihood of drinking more heavily and drinking across an extended period of time increases significantly,” Clapp reported.

Clapp claims that the social events that see the highest rates of binge drinking are those you might predict: tailgate parties, fraternity parties and bar crawls. Since his previous research has illuminated the link between binge drinking and an increased risk of individual harm, Clapp is interested in developing effective ways to preemptively curb drinking rates. “Research increasingly suggests that technological advances may be able to slow behavioral trajectories that could end in harm,” he said.

Beyond system dynamics modeling, Clapp points to advancements in predictive analytics and wearable biometric technologies—such as geofencing, which leverages GPS or RFID technology to define virtual geographical boundaries and trigger a response when a device crosses set boundaries. He believes that within the next five years, wearable tech that utilizes predictive and real-time analytics could prove a powerful tool in enabling users to self-monitor for intoxication levels.

As for more readily implementable interventions, Clapp re-emphasizes the role of access to alcohol. “If event organizers implement a regulated system—such as handing out drink tickets, establishing a set window of time during which attendees can drink, or hiring what is known as a responsible beverage service (RBS) to help hosts serve alcohol responsibly—they are more likely to reduce rates of binge drinking.”

Those who choose to drink can practice mindfulness to better assess their personal needs. “Ask yourself questions like: How am I getting home tonight? What do I need to accomplish tomorrow? What responsibilities do I have? How can I remain safe and feel my best?” Clapp said. “Self-regulation remains the best way to reduce your risk.