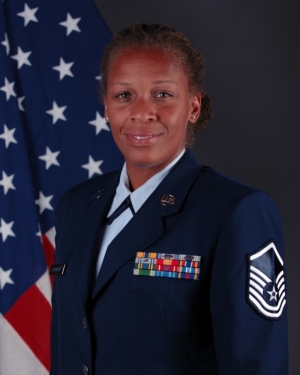 Carla J. Thornton had always been involved in community work, but it took being part of a class on community organizing to change her life. The light bulb moment came while she was obtaining her master’s in social work at the University of Southern California. “I realized I could do social work at the macro level and directly impact individuals,” she said.

On Feb. 11, Thornton, MSW ’12, — who is the associate director of development for the University of California Riverside College of Humanities, Arts and Social Sciences — was appointed to the California Veterans Board, which advocates for veterans affairs by Gov. Jerry Brown. Also on the board is Gena Truitt, MSW ’12, and Navy veteran.

The position, which requires Senate confirmation, is open solely to veterans.

Joining the board is just an extension of Thornton’s community service. She currently serves in the U.S. Air Force Reserve and was on active duty from 1997 to 2008.

She was also a sexual assault victim advocate for the U.S. Air Force Reserve in 2007. “Being in the military exposed me to the issues that women face by serving — their struggles, whether it was not trusting leadership to report sexual assault or the number of assaults that were occurring each year.” There was a huge problem and Thornton wanted to help educate the Air Force community on the issue, and advocate for the victims who felt they didn’t have a voice. “Each branch of the military implements sexual assault prevention differently and the Air Force is the most successful in providing a culture that women generally feel safe to report [sexual assault], but it is still occurring and that is a big issue.”

On the California Veterans Board, Thornton will work to represent the voice of veterans throughout the state. “I will advocate for veterans, identifying needs and working to ensure and enhance the rights and benefits of California veterans and their dependents.”

How did you end up as one of the seven appointees to the State Veteran’s Board?

I originally applied to join the Board in 2013 and was not selected. When I heard that UCR was hosting the Secretary of Appointments, Mona Pasquil, for a public forum on campus to talk about the appointments process, I jumped at the opportunity to attend.

During the Q&A portion of the forum, I spoke with Sec. Pasquil about my experience with the application process and expressed my continued interest with joining the California Veterans Board.

I honestly believe that I was appointed because I took advantage of attending the public forum, timing and my experience. I also received a recommendation letter from Sen. Richard Roth and that helped tremendously!

Why were you interested in being on the board?

California is home to approximately 1.8 million veterans, more than any other state in the nation. We have more women veterans, more veterans from underrepresented groups and unfortunately more homeless veterans. Military members and their families make many sacrifices when they serve. This service is honored through the benefits they receive after being discharged from the military. I applied for the board because I wanted to be a part of ensuring that the state of California remains the best state for veterans to live.

What are your goals for your tenure?

During my term, my goal is to enhance the rights and benefits of California veterans and their dependents by working with the Secretary of California Department of Veterans Affairs. Specifically, I would like to work with CalVet to enhance the education, employment and housing benefits that will directly increase the lifetime earning potential for veterans and their families.

How did your experience in the military segue into your desire to serve on the State Veteran’s Board?

I am still currently serving, I am Master Sergeant (E-7) in the Air Force Reserves and am assigned to March Air Reserve Base. I also spent 11 years on active duty. I am a community servant at heart and believe in being an active participant of my community at both the local and state level. I joined the Air Force when I was 18 years old and have a deep affection for my brothers and sisters who have served our country.

Do you think it’s important for UCR folks to serve on state boards?

Absolutely! One thing I learned during the public forum is there are not many people from the Inland Empire who serve on state boards. We have a voice and a perspective that is not being represented in Sacramento. I wanted to help change that. My personal motto is “I’m here and I have a voice” so if not me, then who? I am proud to be associated with UC Riverside, March Air Reserve Base and the United States Air Force.

Do you think working at UCR will help you serve on the California Veterans Board and vice versa?

UCR is very veteran friendly to students and staff. Hopefully I’ll be able to bring information back to the program … I would love to start collaborating with Karen Springer and Christa Jones, who assist on campus. All veterans on campus — students, staff and faculty — should be utilizing their veteran benefits to the fullest extent. It would be beneficial if we could partner in UCR’s goal to provide resources and assistance to veteran students as they transition from active duty to college students.

How has your USC experience helped prepare you for this new role?

The USC MSW changed my life! My class in the San Diego Academic Center was a mixed bunch, comprised of veterans, military dependents and civilians who had a collective moral charge to work with veterans. The lessons learned on social policy, advocacy and how we could directly impact entire veteran communities by focusing on social transformation from a macro level fed thought-provoking conversations within those classroom walls and whenever we see each other even now four years later. The USC MSW provided me with the foundation and the tools to envision myself as a change agent and an advocate by surrounding me with other veterans who had bigger dreams than me on how we can help our nation’s veterans. My class inspired me and I knew I could be doing more….should be doing more for the veterans and their families that live within the State of California while serving on the board.

What value do you think social workers can bring to this statewide board?

Even though I am a non-traditional social worker, I have a magnet on my desk that was given to me during graduation that describes the amazing skills that social workers bring to the table.
Supportive
Observant
Clinically Skilled
Informative
Advocate
Listener
Working
Organizer
Resourceful
Knowing
Effective
Respectful

This article was originally published on March 7, 2016, on UCR Today.