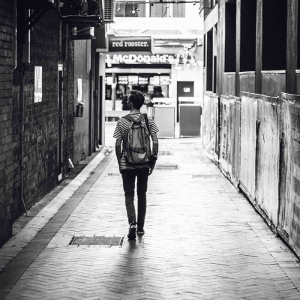 Homeless youth have unique needs when it comes to housing programs. A doctoral candidate explains how host homes can help.

Of the 47,000 people who make up Los Angeles’s homeless population, an alarming 75 percent are without shelter — among them, a large group of homeless youth. Though each person’s path to homelessness is different, many of these youth share the same dream: to find stable housing. This age group faces a number of obstacles in seeking permanent housing, and often find that the options available to them don’t provide the safety or autonomy they need.

Robin Petering, a USC Suzanne Dworak-Peck School of Social Work doctoral candidate, has spent years studying the challenges faced by homeless youth, with an emphasis on young adults aged 18 to 25. We spoke with her about the role that host homes can play in providing much-needed stability in the lives of these youth.

The Origins of Host Homes

As the number of homeless youth across the country rises, social workers and other service providers are experimenting with new models of shelter. Most pre-existing systems favor two options: temporary shelters and permanent supportive housing. As a result, homeless youth often find themselves stuck choosing between options that fit neither their needs nor their desires.

“Most homeless youth aren’t looking for us to provide permanent homes,” Petering says. “They want control over where they live and a feeling of autonomy. Shelters, on the other hand, present safety issues and aren’t always inclusive of LGBTQ people. They’re also enormously expensive to run and don’t represent the most efficient use of resources.”

In search of an alternative, communities throughout the United States are turning toward the host home model, in which responsible adults with spare rooms offer short-term housing to homeless youth. Placements generally last between one and three months, but can extend as long as six months depending on the guest’s needs. Host homes are also known as “bridge housing” because they act as a transitional option between a night in a shelter and more permanent housing.

This arrangement works especially well for youth who find themselves temporarily homeless, Petering says. “Young adults struggle to access housing because of their age or lack of credit history. Even when they do secure housing, an inability to pay rent due to an unexpected expense, such as car repairs, can jeopardize their situation. They’re not looking for long-term housing. What they really need is a bed to crash in while they stabilize their finances and get back on their feet.”

Host homes have long been essential to the LGTBQ community, where queer youth who have been kicked out of their homes find rooms with older LGBTQ people through informal networking. The model has since gained popularity across the United Kingdom and Canada, and is slowly spreading across the United States in cities such as Baltimore and San Jose, California.

The host home model offers a number of benefits to homeless youth and service providers alike, Petering says. Instead of running a facility with multiple volunteers or employees, host home placements can be managed by one coordinator in the community.

The efficacy of this program surprised Petering, in part because it goes against the firm boundaries that most social workers are taught to maintain with their clients. “When they hear about host homes, many providers feel iffy about it,” Petering admits. “But our current systems aren’t working, and maybe we have to push ourselves out of our comfort zones to find a lasting solution.”

The biggest benefit of this program, Petering believes, is what host families and youth gain from each other. “The community-driven component of this model provides benefits to both parties,” she says. “Youth get a temporary place to live, but the community also becomes more aware of homelessness and the issues surrounding it.”

Petering is part of a research team evaluating a new host home program, Safe Place for Youth, in Venice, California, that recently received funding from Home for Good. Over the next few years, Petering and her team will give coordinators feedback on management and recruitment styles, helping them shape the program to the area’s unique needs.