Overcoming Fear to Support Others 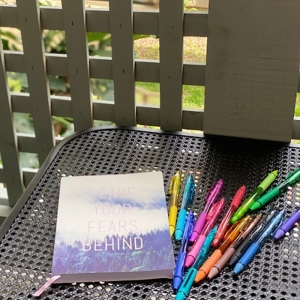 Writing about her COVID-19 experiences in a journal is helping this MSW alumna through the crisis.

MSW alumna of the USC Suzanne Dworak-Peck School of Social Work, Megan Ford (name has been changed to protect anonymity), works the graveyard shift at a Los Angeles County hospital, five days a week. She has been a medical social worker for 17 years, and under more stress in the last six weeks than over her entire career.

What makes things so stressful for Ford is that she goes to work in fear every day of potentially contracting COVID-19, and bringing it home to her family, because she is not properly protected. She has a daughter who is asthmatic, and this is constantly on her mind.

It is no secret that there is a shortage of PPE: masks, gloves, gowns, everything health care workers need to safely do their jobs. In the past, there was a very strict protocol for how PPE was used and disposed of in hospitals to ensure whatever infection a patient had was not spread outside of the room where they were being treated. Now, Ford said, she has been instructed to use the same mask all day, while attending to multiple patients.

Learning something new every day

Work flows and protocols are changing daily. Social workers have been instructed to prepare for end-of-life consultation with families on a massive scale. With a surge of COVID-19 cases expected in Los Angeles, a surge of deaths is expected as well.

“It’s almost like having to learn a new job every couple of days,” Ford said.

One evening at the start of her shift, Ford learned there was a new protocol for working with individuals experiencing homelessness who are suspected of having coronavirus. But no one else— doctors, nurses or managers―was aware of it in the ER. No one else had received this information.

So much uncertainty exists, and part of her job, and her natural inclination, is to support those around her. Ford assured her co-workers it would be another new thing they would figure out, one step at a time.

“The nurses are the brave ones because they spend the most time in the rooms, absolutely,” Ford said. “And we're there too. We're supporting the staff, trying to be support systems for them, and the patients, and the families of the patients that are at home and can't be there."

Ford makes a point to stay up-to-date, every day, on all new community resources available and changes in care. People are coming into the emergency room anxious and depressed, and they need current information. There are new shelters to help those experiencing homelessness get off the streets, help for people who have lost their jobs and food banks.

According to Ford, the number of patients coming in COVID-positive to her hospital’s ER has not been overwhelming, and the numbers balance out because far fewer people are coming into the ER for other medical reasons. However, more individuals have found the pandemic to be an emotional trigger.

“I’m seeing an increase in patients who are relapsing because of this,” she said. “They are having difficulty coping with all the uncertainty, and the fear. They’ve lost their jobs and now there’s financial stress. So they’re turning to what they know, and that could be alcohol or other drugs that are exacerbating the depression.”

Her own self-care includes spending time with her kids and trying to be present with them. She also started journaling. Besides knowing it is a therapeutic exercise, she also thought it would be a good way of recording her experiences during this time that her children might want to better understand at some point.

Ford limits the amount of news she watches. “I’m living this, I don’t need to see it,” she said. “Inevitably I’m going to get angry when I hear the President, and the lies, because I am experiencing something completely different than what he is saying and it is infuriating.”