A Message from Dean Sarah Gehlert Regarding Violence Against the Asian American, Asian and Pacific Islander Communities 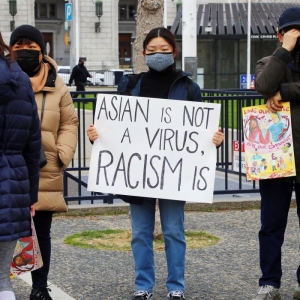 The tragic events that occurred in Atlanta this week remind us that racism, hate and bias remain a heartbreaking factor in our country and the daily lives of many Americans. We are deeply saddened and indignant that yet another community continues to be a target for discrimination and brutality based on race and gender.

We must stand in solidarity with our local and national communities of Asian Americans, Asians, and Pacific Islanders and ensure they are protected from further violence and discrimination. We cannot let our guard down in the face of intolerance, and we must speak out against all forms of prejudice and bigotry that continue in our society.

Racist acts against Asian Americans, Asians, and Pacific Islanders are not new in this country. We have blood on our hands from the Chinese Massacre of 1871 in Los Angeles, a horrific act of violence against the immigrant community. During World War II American citizens of Japanese descent were taken from their homes, having committed no crime, and forced to live in internment camps as prisoners in their own country. Now, we must say the names of Angelo Quinto, a Filipino Navy veteran who died in December after police knelt on his neck, Vicha Ratanapakdee, an 84-year-old Thai immigrant who was slain in January while taking a morning walk in his neighborhood, and Delaina Yaun, Xiaojie Tan and Daoyou Feng – three of the six women of Asian descent who died in the Atlanta shootings. These are only a handful among the more than 3,000 reported incidents of violence against Asian Americans, Asians, and Pacific Islanders across the country since the beginning of the pandemic last March.

It is not enough to simply acknowledge the problem. As social workers we have an ethical duty to raise our voices and intervene against hatred and racism, but also to educate ourselves and others about privilege and bias. Left unattended, even the smallest amount of bias can grow into resentment and eventually to deep mistrust and hate. We all watched this unfold over the past four years and it will take constant work to undo the damaging and reckless rhetoric of the former administration that fueled these racial divisions and violence. According to the 2019 Hate Crimes Report from the U.S. Department of Justice, 57.6% of bias motivated crimes were race, ethnicity or ancestry based, 20.1% were based on religion, and 16.7% on sexual orientation. Of the over 6,000 known offenders of this crimes, 52.5% were perpetrated by whites.

Asian Americans Advancing Justice (AAJC), the nation's largest Asian American legal and civil rights organization, has created a platform to empower Asian Americans, Asians, and Pacific Islanders to document their experiences of racial and gender hate. The Stand Against Hatred platform is a powerful tool that can be used to educate and inform. Our Asian American, Asian, and Pacific Islander students, faculty and staff need the support of our Trojan Family as they navigate through an increasingly frightening time for themselves and their families. We can all speak up when we encounter anyone using pejorative language or references that have the potential to incite hateful actions against others. And when safe to do so, we should report any acts of hate or bias we witness or learn about to the proper authorities.

Together, we are capable of creating a safe and just society for all. We extend our compassion, advocacy, and vigilance for the Asian American, Asian, and Pacific Islander communities in this moment and in the future.