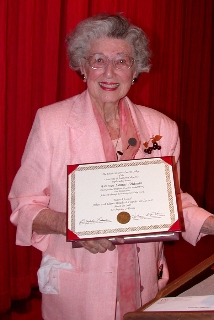 Frances Lomas Feldman, a pioneer in the field of social work and a USC faculty member for 36 years died Sept. 30, a week after suffering a stroke. She was 95.

Feldman's varied interests led not only to groundbreaking studies on the psychosocial effects of cancer but the creation of a nationwide organization to help families deal with money problems, as well as the establishment of a faculty and staff counseling center at USC, now a blueprint for employee assistance programs across the country.

"Not only was Frances Feldman a respected scholar, she served the university and its faculty well as a leader who cared deeply about students and about our mission," USC President Steven B. Sample said. "She was a pillar among the faculty and a perceptive, energetic guide in the wider community."

Though a distinguished professor emerita who officially retired in 1982, Feldman still drove herself to campus twice a week pursuing research in the psychological and social meanings of money and work in family life.

"Frances Feldman's presence in this school and the university was iconic," said Marilyn Flynn, dean of the USC School of Social Work. "Her presence through nearly six decades of our development was as striking and influential at the end of her life as at the beginning of her career."

Feldman, who graduated from USC in 1935, joined the USC School of Social Work in 1954 and made an immediate impact.

Her seminal research on the effects of money stress on families resulted in the founding of Consumer Credit Counselors, now a network of 350 counseling services nationwide.

In the late '60s, her interests in the family dynamic led her to the sparsely Eskimo-populated tundra region of Alaska. Still she was always involved in the densely populated public housing projects of southeast Los Angeles, leading the McCone Commission, which examined the Watts riots of 1965, to call on her expertise.

Feldman also authored a milestone, three-volume study looking at the psychosocial effects of cancer in the work place for the American Cancer Society in the late '70s.

Her research on familial stress and worker productivity paved the way for the industrial social work specialization at the USC School of Social Work, the first such curriculum in the West, as well as the formation in 1980 of the USC Faculty/Staff Counseling and Consultation Center.

The center, now known as the USC Center for Work and Family Life, helps employees find a balance between work and personal life through group support, counseling, nutrition advice and other services.

"Frances was ahead of her time in many ways," said John Gaspari, executive director of the USC Center of Work and Family Life. "My staff and I are beneficiaries of the legacy left by professionals like Frances."

Feldman also was a founder of the California Social Welfare Archives at USC, an organization of volunteers dedicated to preserving the history of social work in California.

"She almost singlehandedly was responsible for the discovery and preservation of social welfare history in Southern California," Flynn said. "Her attention to the archives of the school of social work at USC literally saved the soul of our school for the ages."

Feldman also was the first president of the reorganized Faculty Senate in 1973 and second chair of the President's Advisory Council in 1974.

A world traveler, Frances visited more than 200 countries, including Inner Mongolia, Burma, Ethiopia, Mali, and Papua New Guinea. Many of those trips she made with her late husband, Albert G. Feldman, who was deputy director of the USC Andrus Gerontology Center.

Feldman was also a huge Trojan football fan and for decades hosted a Rose Parade party every New Year's Day.

In retirement, she chaired the Senate's task force on the endangered university library system, served on the Planning Board of the Emeriti College and the Board of Retired Faculty, and she had been president of the California Social Welfare Archives for six years.

Feldman authored 10 books, including "Human Services in the City of Angels: 1850-2000," which was completed under the auspices of the Los Angeles City Historical Society and brought her the 2004 Wheat Award from the Southern California Historical Society.

She was inducted into the California Social Work Archives Hall of Distinction in 2005.

Contributions in her memory can be made to the USC School of Social Work. Please designate the Albert G. and Frances. L. Feldman Fund.