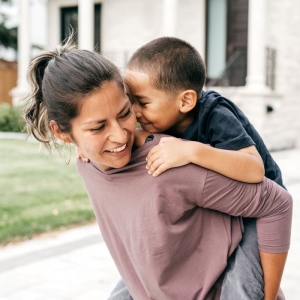 For several years, PhD student Abigail Palmer Molina has focused her dissertation study on the experiences of mothers participating in an intervention for maternal depression, implemented as part of the Head Start program in South Los Angeles. The majority of the mothers were Latina immigrants, and Palmer Molina looked at their experiences to provide a richer picture of the intervention's effectiveness. When the COVID-19 pandemic hit last year, she was compelled to find out how these women, and their communities, were being affected.

“I just needed to know how they were doing,” Palmer Molina said. “This is already a disadvantaged group that's very precarious. They have a lot of different stressors, so what does the pandemic represent for them?”

Palmer Molina quickly realized that the data she was collecting from these Latina immigrant mothers needed to be translated into policy recommendations that could be easily disseminated to better serve this community. Help was urgently needed.

“She really thought it would be good to understand how these mothers were faring during the pandemic,” said Ferol Mennen, associate professor and Palmer Molina’s primary mentor and advisor on her COVID-19 study. Mennen also led the Healthy Moms, Healthy Kids intervention study at Head Start that formed the basis for Palmer Molina’s work.

“In particular, Abigail was interested in the mothers who had made considerable progress in the program and understanding what was happening to that progress now during the pandemic,” Mennen said.

Palmer Molina recently published her findings in Voices at the Intersection of Discrimination and Health Disparities: Stories from Latina Immigrant Mothers during COVID-19, in collaboration with the USC Center for the Changing Family at USC Dornsife College of Letters, Arts and Sciences,  the USC Suzanne Dworak-Peck School of Social Work and the USC Center for Translational Science.

Palmer Molina and the data collectors on her team had already established strong relationships with the Latina immigrant mothers they had interviewed for the intervention study with Head Start. Previously they had interviewed these women about their experiences with depression and how different social locations impact them in terms of gender, ethnic-racial identity and low-income status, and how these coalesce. Palmer Molina and her team specifically looked for areas where the intervention had made an impact on improving outcomes for these mothers.

Because that trust had been built, this same group of Latina immigrant mothers were very open to discussing their experiences during the pandemic, particularly in relation to their immigration or undocumented status. The COVID-19 study, conducted between September and December of 2020, explored the impact of the pandemic on their economic well-being, maternal mental health and family functioning.

“I think the study is important because there's a lack of research that focuses on these invisible communities,” Palmer Molina said. “It really portrays how these different stressors are compounding for undocumented families, and for documented mothers that have undocumented members of their family. So that's really the strength there — lifting up the lived experiences and actually giving voice to that community.”

Palmer Molina heard so much confusion from the mothers around whether or not they were eligible for certain programs, or if they would be required to pay back funds received from the government. “There was so much stress and anxiety around just the lack of information,” she said.

The Latina mothers also described the hardships around stay-at-home orders and distance learning. Some were unable to help their children because of their lack of English language proficiency, while others reported that the school-provided internet hotspots did not work. Economic challenges included job loss, reduced hours or juggling work and childcare. These issues then mounted further difficulties including paying rent, losing phone and internet service, experiencing food insecurity and escalating debt.

Per Palmer Molina’s published brief, stress from the overwhelming economic difficulties spilled over into family life and often led to maternal psychological distress, including depression and anxiety, and had negative impacts on children’s health and well-being. These stressors were often compounded by immigration status, as undocumented mothers and members of mixed-status families were overlooked in major relief programs.

According to Mennen, Palmer Molina’s work around the effects of the pandemic started out as a follow up to the previous intervention study with the Head Start families. But as the information was gathered, Palmer Molina saw that it was too important to wait.

"Her big goal now is to get the information out as widely as possible in hopes that things can happen to address some of the shortcomings that exist in the pandemic relief,” Mennen said. “So, these mothers can get more of what they need.”

Palmer Molina describes the data collection she and her team performed as “a fast and rigorous qualitative analysis,” in order to put out a policy brief within the necessary expedited timeline. She focused on the important stories and recurring themes coming directly from the mothers, such as not being eligible for stimulus payments even though families are paying taxes.

“I was really trying to sit more with what the current policy picture is and what's coming down the line,” Palmer Molina said. “Are those things going to address some of these issues? What can we put forward as policy recommendations?”

Associate Professor Dorian Traube, who served as an advisor, believes Palmer Molina’s work is groundbreaking in this area.

“With this project, she is delving into how we take this work and make it have really meaningful policy implications,” Traube said. “Abigail has this really unique lens. She is an exceptionally well-rounded social worker in that she has this breadth of clinical experience but is also a phenomenal researcher.”

The takeaway from Palmer Molina's work, according to Traube, is that this segment of the population is exceptionally vulnerable in so many ways, and especially around COVID-19. The Latino population has disproportionate rates of contracting COVID and dying from it. They are often the frontline workers - in hospitals, factories and grocery stores.

One of the most notable realizations highlighted in Palmer Molina’s data collection is that the first round of government stimulus funding disqualified entire families if just one person in the family was undocumented. “I did not realize that until I started reading Abigail's report,” Traube said. “I think a lot of people didn’t realize that Americans, people who are legally here in the U.S., were penalized in this way, and what this meant to their ability to care for their families.”

Looking to the future

Palmer Molina believes in the power of linking personal stories and lived experiences to understand how policy choices actually impact the family and lead to major concerns such as maternal mental health issues and disruptions in children’s development.

“Most people are really interested in family well-being, in kids growing up and doing well, and so you can trace it back for them,” Palmer Molina said. “Try to put yourself in their shoes and maybe that might help people change their perspective on this community.”

As the country shifts gears and starts to look at returning to normal, Palmer Molina is worried that this group is going to be left behind.

“I want people who are not social workers or are not researchers in social work to understand that this population is really being penalized by the system and by policy that's been created in real time, as we respond to the pandemic,” Palmer Molina said. “We have to make sure that this community is coming along with us. The setbacks this community are experiencing may impact a family's prospects or wellbeing for years, if not generations, if something is not done.