A Diversity of Perspectives 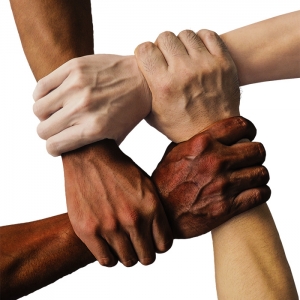 Efforts to improve diversity, equity and inclusion at USC schools have built momentum toward change.

Sometimes to move forward, one needs to look back.

As USC grapples with a culture change process aimed at improving how the university functions, lessons can be drawn from the work that has been done by its diversity liaisons.

Seeds planted four years ago to expand diversity, equity and inclusion (DEI) efforts at USC are sprouting up as strategic priorities at each of the university’s 21 schools. They may provide a prescription for critical conversations, problem solving, and working collaboratively with stakeholders across campus to ensure the implementation of practices and policies are done so efficiently and effectively.

For those who don’t see the connection because they think DEI work refers only to race or gender, Renee Smith-Maddox, the diversity liaison at the USC Suzanne Dworak-Peck School of Social Work, contends that they are seeing only part of the picture.

“DEI work is a strategic imperative for examining our systems, policies and processes; holding ourselves accountable to diversify the campus community; addressing gender and racial equities; and creating inclusive workplace and learning environments,” said Smith-Maddox, who also chaired the provost’s Diversity and Inclusion Council and co-chaired the USC Academic Senate’s Campus Climate Committee for the past four years. “To achieve DEI takes engagement, courage, persistence and consistent actions over time.”

And for most of the diversity liaisons across campus, their work is primarily centered around creating an inclusive environment for a wide range of campus constituents – including students, staff, faculty and administrators – that not only accommodates but embraces a range of perspectives, addresses gender and racial inequities, and implements equitable policies and practices.

USC Rossier School of Education Professor John Slaughter knows a few things about diversity and inclusion in higher education. As former president of Occidental College, he led that campus’ efforts to earn its place among the most diverse liberal arts schools in the United States.

“The term diversity has become so overused and so misinterpreted that it has almost become meaningless,” he said. Slaughter recalled someone saying that diversity is about counting heads, while inclusion is about making heads count. He liked the sentiment.

“Diversity is a passive word. We need to focus on action, and that means equity and inclusion,” he said.

Diversity in institutional settings has traditionally referred to legally protected categories like race or gender, but over the years this has evolved. Today, diversity experts are increasingly considering a wide range of factors from age and sexual preference to disabilities and status within the organization.

Simply put, the social work school’s vision is to create an academic community where all perspectives are welcomed and can be respectfully and robustly debated, Smith-Maddox said. The five-year plan is a blueprint for organizational change and innovation that she hopes the new leadership will consider. Its recommendations — informed by surveys, focus groups, and a synthesis of quantitative and qualitative data — aim to develop spaces for dialogue within the school to learn how to address racism, discrimination, disrespect, inequities and privilege, while building an ethos of intellectual engagement, curiosity and respect for others.

Smith-Maddox has high hopes for the plan based on results from a school-wide climate study conducted earlier this year. More than 700 people responded to the survey, across all constituent groups, showing a willingness for engagement and desire to improve policies and practices. The survey results will be essential in informing the school’s interim and permanent leadership about paths for advancing DEI efforts.

Four years ago, a directive from then-Provost Michael Quick asked each of the deans from USC’s 21 academic units to identify a diversity liaison from among their faculty or administrators to be a leader, ambassador and catalyst for change. The idea was that each school possessed its own microculture and that localized DEI efforts would be more effective than in a top-down structure. This new position created an opportunity for the diversity liaison to work with the school’s leadership team to advance DEI as integral components of the school’s mission.

At the USC Sol Price School of Public Policy, LaVonna Lewis leads its DEI efforts. The school’s mission is to improve the quality of life for people and their communities, here and abroad. Here, helping communities solve problems aligns perfectly with the school’s diversity and inclusion work. After all, she said, we need to practice having those hard conversations among ourselves before we can go out in to the world and help others.

USC Price’s “Our Stories, Our Goals” website created two years ago invited students, faculty, alumni and staff to contribute stories of prejudice and judgment — stories that showcased victories, disappointments, and above all, opportunities to learn from one another.

Lewis, who serves as associate dean of diversity, equity and inclusion, said that often the conversations focus on the unintentionality of some harmful interactions. People make offhand comments that rely on ethnic stereotypes, often without realizing what they have done. For example, a Latinx staff member recalled being asked to help cook tamales because another person assumed she was Mexican and must know how. (Neither assumption was true.)

Lewis reads each story sent to the website, edits it so that the person’s identity is not detectable, then posts the story online. Subsequent face-to-face sessions take place where staff, faculty and students gather to discuss the stories.

“What we find is that there is always more than one way to see a situation,” Lewis said. “We cause harm without intending to when we assume another person’s viewpoint is the same as ours.”

At the USC School of Dramatic Arts, Associate Dean of Equity, Diversity and Inclusion Anita Dashiell-Sparks notes that they are currently revising their strategic plan using the results of a recent school-wide climate survey. A focus on excellence in teaching has already begun to foster an inclusive, culturally responsive and diverse learning environment. This means “actively seeking diverse perspectives and accommodating different learning styles in the classroom as well as in the curricula,” she said. It’s not just talk: faculty members there are held accountable for meeting DEI goals as part of their annual merit reviews.

For Smith-Maddox, the appointment of the diversity liaisons was an indicator of USC’s commitment to a culture change. For DEI to work, it has to be embedded in the institution's mission, culture, human capital and core processes.

Aligning DEI with the culture change work underway is a way to accelerate our institutional change efforts, she said.

“This is a time of transition and transformation at USC,” Smith-Maddox said. “If we work collaboratively to create an inclusive environment where people feel heard and valued, and are able to participate in making a positive impact, our efforts will make a difference.”