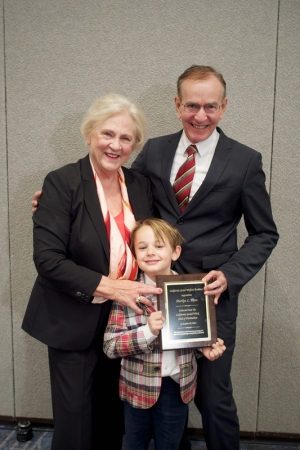 It’s safe to say Marilyn Flynn is in esteemed company.

The dean of the USC School of Social Work is among six individuals with distinguished and successful careers in social work who were inducted into the California Social Work Hall of Distinction during a recent ceremony that recognized their exceptional contributions to social justice and social welfare.

Joining Flynn in the new class of inductees are Marilyn Montenegro, PhD ‘81, a social worker committed to resolving issues of societal inequality, and Helen Ramirez, MSW ‘59, whose work in child welfare and adoption services have been a model for practice and outreach in minority communities.

“It’s so heartening to see so many people committed to preserving the history and dignity of the profession of social work in California,” said Rino Patti, DSW ‘67, dean emeritus of the USC School of Social Work and professor emeritus.

In accepting the honor, Flynn emphasized the need to cultivate and cherish an appreciation for the history of the social work profession in California. Although much is known about economic and political development, she said less is understood about social workers who transformed the wild society of the West into a caring community.

“I’m extremely proud to be part of a narrative that exemplifies and honors social work in the West,” she said, adding that she feels she is following in the footsteps of Frances Feldman, a social work pioneer who laid the groundwork for the Hall of Distinction. “I hope we are establishing a tradition that endures and inspires others for generations to come.”

A transformational leader who in 1997 became the second woman to serve as dean of social work at USC, Flynn created the first military social work specialization at a major civilian research university, established a groundbreaking and successful web-based master of social work degree program, and recruited a diverse and distinguished faculty specializing in health, mental health, aging and child maltreatment.

“She’s always looking beyond the obvious to new opportunities,” he said. “Marilyn has always been willing to share resources and time and energy and intellect to advance our profession to a new level.”

Despite her many accomplishments, Flynn said she plans to press forward with efforts to promote social work in the West and develop new partnerships throughout the Pacific Rim.

“California is the world’s eighth largest economy; we are both the prophets and the canaries in the mine for the 21st century,” she said. “I believe we will be the source of social leadership on some of the greatest challenges confronting our society today.”

Paraphrasing C.S. Lewis, she added that it is never too late to set another goal or dream a new dream. “I’ve always believed this,” she said, “so just wait, there’s more to come.”

Flynn is joined in the Hall of Distinction by Montenegro, who has been a committed advocate for equality since her days as a graduate student at the UCLA School of Social Welfare and later as a doctoral student in urban studies at USC. Throughout her career, Montenegro has tirelessly pursued efforts to increase diversity in academia, address housing discrimination, and protect prisoners from abuse and inhumane conditions.

Ramirez, another USC alumna, developed innovative programs and policies in child welfare and served as a vigorous advocate for minority children and families, establishing the first social work unit in the Los Angeles County Department of Adoptions focused on placing children with developmental disabilities with adoptive families and creating a support and training program for emancipated youths transitioning from foster care.

The Hall of Distinction also welcomed L. Georgi DiStefano, an advocate for the integration of alcohol abuse and mental health treatment services; Alex J. Norman, a proponent of building coalitions across racial and ethnic lines; and Fernando Torres-Gil, a champion of issues related to aging and health in later life.

Established in 2002, the Hall of Distinction has honored 91 individuals who have made outstanding contributions to social welfare and social work in California. In particular, the organization has emphasized leaders who served as practitioners, administrators, advocates, educators or other high-impact contributors to the profession.

The Hall of Distinction is supported by the California Social Welfare Archives, which identifies and preserves documents and memorabilia related to social welfare programs in California and gathers oral histories from professional and volunteer social welfare leaders. The archives are housed at the USC Doheny Special Collections Library and supported by the USC School of Social Work.