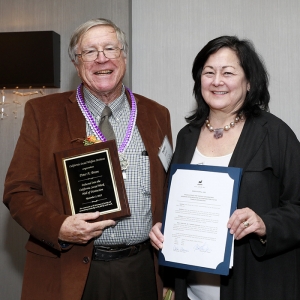 On November 22, 1963, Peter Breen, MSW ’67, was home watching his two-year old daughter when he heard of President Kennedy’s assassination.

“I sat in front of that TV for three days,” said Breen. “Three weeks later I left the farm in Gilroy, California and said, ‘we’re going to do something good.’” And good he did. For 55 years, Breen has been working to promote innovative child welfare services and programs in California.

On November 3, a statewide panel of social workers recognized Breen’s exceptional lifetime of good work with an induction into the 2019 Hall of Distinction for the California Social Welfare Archives (CSWA). The honor acknowledges and documents the work of those who are champions of social welfare in California.

Mary Denton, CEO of Side by Side, a community-based, nonprofit organization serving at-risk youth and their families, introduced Breen at the induction ceremony. “It is no exaggeration,” said Denton, “that Peter has made the lives of hundreds of thousands of children so much better.” Denton lauded Breen, who serves as board of directors chair at Side by Side, for his passion, wisdom and experience serving children who have been impacted by adversity.

Thanking Denton, the 82-year-old Breen joked, “I thought that I was listening to my obituary. But it was really, really nice.”

A champion for children

Breen joined the Los Angeles Bureau of Public Assistance as a social worker in February 1964. “The salary then was $464 a month. With that, we bought a house. And a car,” said Breen to a chuckling crowd.

His first assignment was to Metro South 1, the northern part of the Watts neighborhood in South Los Angeles. Six months later, he was in the middle of the Watts Riots. “We were immediately sent home,” said Breen, “because clearly the administration didn’t want a bunch of white liberals wandering around. It was a scary time.”

Breen said he started working with children because that’s where there was a vacancy at the Bureau. However, he quickly realized it was here he would be most interested in what he was doing, and be best used. “I got totally wrapped up in it,” said Breen, “and I’ve never given it up.”

Over the course of his career, Breen served as Marin County welfare director, Marin County child welfare services director, president of the American Public Welfare Association, board member of the National Resource Center for Children of Incarcerated Parents and executive director of Centerforce, a statewide social services agency for 90,000 family visitors to California state prisons.

Breen loved being a part of helping families who often made very long trips to the prisons, offering hospitality and respite services. Quite often families of prisoners are disrupted; and kids in disrupted families stand a better chance of getting involved in negative behavior than kids from intact families.

Making things better is just a way of life

Today, Breen serves as a senior fellow with the Child Welfare League of America (CWLA) as an expert on children of prisoners. He also remains deeply immersed in local politics in San Anselmo, California, where he has been mayor four times, and served on the town council for 17 years.

Last year, Breen and his wife, Ione, traveled to Syria with a group from Caring for Children Worldwide to deliver 5000 Teddy Bears―what Breen refers to as psychological emergency first aid― to refugee children.

“Peter doesn’t wait to be asked to do something,” said Denton. “He sees a need and figures out how to bring forward solutions.”

While Breen is honored to receive CSWA’s highest accolade, it is even more important to him that CSWA continues to serve as encouragement for people outside the industry to look into social work, to get involved, to think about social work and to talk about all the good that can be done.

“I have a horrible habit of trying to get involved in figuring things out,” said Breen. “I like to believe, helping make things get better. It’s just a way of life for me.”

About the California Social Welfare Archives

The mission of the CSWA, a nonprofit organization affiliated with USC Suzanne Dworak-Peck School of Social Work and the USC Doheny Memorial Library Special Collections Department, is to enable users to more deeply understand linkages between the past and present, in order to address future social welfare problems and solutions. Organized in 1979, CSWA collects correspondence, minutes, memoranda, annual reports, research papers, conference proceedings, oral histories, and newsletters reflecting the development of social welfare programs, problems, issues and services in the state.