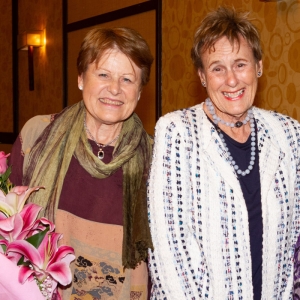 June Simmons “may be the social worker we all want to be,” said Monika White, former CSWA president, in her introduction. “She does everything…and everything she does and has done and continues to do is either for the current or long-term benefit of vulnerable populations, and that is the prize that she keeps her eyes on.”

In service of others

Soon after earning her MSW, Simmons was the first social worker to be hired at Huntington Hospital in Pasadena, California, where she was instructed to “do something about aging.” Recognizing the potential of a hospital to be a focal point for services for older adults, she developed the Senior Care Network, a comprehensive geriatrics center that became and remains a vital resource in the city.

Simmons moved on to leadership roles in the Visiting Nurse Association of Los Angeles. She oversaw the reinvention of the VNA, culminating in the creation of the Partners in Care Foundation (PICF). As founder and CEO of PICF, whose stated mission is “to design and implement new models of evidence-based care that address the key social determinants of health,” Simmons has pioneered a wide range of innovations to integrate care across primary care, hospital, home and community settings. The use of the word “partners” in the organization’s name is significant: its programs rely on partnerships between health care systems, social services, and often, governmental agencies to achieve better health at lower cost for high-risk populations.

One example of the many programs operated by the foundation is HomeMeds, now in use in 18 states, which uses a computerized risk assessment and alert system to help elders keep track of their medications. Simmons then took this program further, adding psychosocial, functional needs and safety assessments to create individual service plans. PICF also holds workshops for self-management of diabetes, chronic pain and chronic disease, and provides a Multipurpose Senior Services program that empowers older adults to live independently as long as possible.

The word most often applied to June Simmons by her colleagues is “visionary.” In addition to the groundbreaking programs she created at PICF, under her leadership the organization was also a founding partner of the Geriatric Social Work Education Consortium (GSWEC) and of the national Evidence-Based Leadership Council. The recipient of numerous awards in recognition of her accomplishments, Simmons serves on a variety of local and national committees, boards and task forces that shape policy and practice locally and nationally. Simmons also provided her visionary guidance as an original co-chair of the Hall of Distinction committee when it was formed in 2002, stating, “we encourage others to enter the field, raise the standard of practice, and heighten community awareness of the role of social workers in improving society.” She has remained committed to this declaration in her varied and impactful initiatives.

“I think it’s her ability to identify needs and then inspire staff, funders, health care providers, other social workers, families and even clients to join her in getting the vision implemented,” White said. “I want to share with you a couple of lessons I learned from working with June: A good idea will eventually be implemented, it just will happen. And you want to surround yourself with smart, caring, knowledgeable people with the same vision and the same eye on the same prize, and there’s almost nothing you can’t accomplish.”

Thanking CSWA for the honor, Simmons concluded her remarks by echoing the sentiments of John Oliver, another Hall of Distinction honoree.

“As Dr. Oliver said, it’s a privilege and we are fortunate to live a life with meaning and purpose that’s true to your values.” As social workers, she said, “we have the pleasure of following our hearts.” She added that her “motto is, number one, it has never not worked out, so you can take the risk because it always works out. And ‘no’ just means it is a much longer discussion than you were planning on!”

CSWA makes available materials related to social work and social welfare programs in California, including a collection of over 160 oral history interviews with social welfare leaders. Housed at the USC Special Collections Library, the archives and its Hall of Distinction are supported by the USC Suzanne Dworak-Peck School of Social Work.