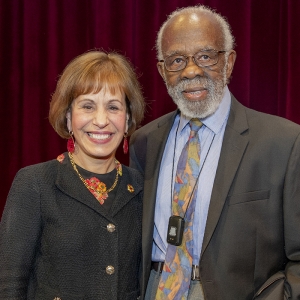 If one did not know that he recently celebrated his 100th birthday, with a series of parties given by family, friends and those whose lives he has touched throughout his years, it would not be obvious. He strides into a room, takes calls on his smartphone like someone a quarter of his age, and engages you in conversation about what he has seen and done across a century of living.

As social work education at USC begins its centennial celebration in 2020, it is only fitting that the USC Suzanne Dworak-Peck School of Social Work’s most senior alum is a man who served his country in one of the most poignant social justice movements in modern history.

Born and raised in Los Angeles not far from the USC University Park campus, Lumpkin, BA ’47, MSW ’53, was a 21-year-old junior majoring in math at UCLA when he was drafted into the military. He was called up just six months after the bombing of Pearl Harbor.

Sent to Fort MacArthur in San Pedro, California, Lumpkin remembers sitting in a room with hundreds of other draftees, taking a series of tests measuring aptitude and knowledge. Once testing was completed, the men were called out in groups and given their assignments.

“They kept calling out names and taking groups out of the room until there were just four of us left,” he said. All four were black, and they were told they would be sent to Tuskegee Army Air Field in Alabama for special U.S. Army Air Corps training.

Lumpkin’s father had moved to Los Angeles from Georgia in 1902, and when he heard that his eldest son would be shipped off to Alabama for training, he warned him to be careful. “Things are different in the South,” his father had told him.

The four men took the train from Southern California to Alabama. “We had a whole compartment to ourselves and the run of the train until we crossed the Mason-Dixon line,” Lumpkin said. Once in the segregated South, they were restricted to their private compartment except for taking meals in the dining car behind drapes set up to conceal them from white passengers.

Though Lumpkin had seen his share of racial discrimination in Los Angeles, he had not experienced the overt and aggressive racism that came with segregation until then. His father was right. It was different in the South and it felt terrible. Lumpkin prefers not to dwell too much on the experience, other than to describe it as a “real down time.”

After receiving basic and radar training, Lumpkin was selected for officer training at US Army Air Corps Candidate School in Miami Beach, Florida in October 1942. He graduated three months later as a 2nd lieutenant with the US Army Air Corps and was assigned to the 100th Fighter Squadron in Tuskegee, Alabama. He served as an air intelligence officer during his overseas combat tour to Italy in the Western Europe Theater from 1944–1945. During WWII, he was a member of the 332nd Fighter Group which consisted of the 99th, 100th, 301st and 302nd Fighter Squadrons.

The Tuskegee Airmen, as they were known, made the most of their training to become some of America's most recognized and decorated pilots serving in WWII. Called the "Redtails" because of the red paint on their plane tails, they dispelled common perceptions that capabilities were tied to the color of one’s skin. In addition to pilots, the airmen were supported by mechanics, nurses, navigators, bombardiers, and others who kept the planes in the air.

For Lumpkin, his day-to-day work as an intelligence officer in the U.S. Army Air Corps was important work in defeating Hitler, and that was good enough. Yes, he knew that many white Americans, including the military top brass, did not think African Americans were as capable as their white counterparts. They believed that having black and white men working closely together would be disruptive. But if Lumpkin could prove otherwise through his performance, he thought, so much the better.

Combat is hard, and Lumpkin remembers good days when they knocked back the enemy and bad days when he lost friends. A particular day stands out from his service at Ramitelli Air Base in Italy in December 1944.

“It was the height of the war,” he said. His all-black fighter group supported B-17 and B-24 bomber squadrons based many miles away. The personnel had never met except at rendezvous points in the air during missions when the fighter planes escorted the bombers to the target.

This particular time, bad weather forced the bomber pilots to land their planes on the fighter base. Lumpkin remembers 17 bombers landing that day. The bomber crews, who were all white, met Lumpkin’s squadron for the first time.

“They were stunned,” Lumpkin said. The pilots of the Redtail fighter planes, who had earned a reputation for courage because they stuck with the bombers no matter what, were black.

Poor flying conditions kept the bomber crews with the Tuskegee Airmen for five days, Lumpkin said. Blacks and whites living together on a base was unheard of and against the military’s segregation policies, but no protests or tension arose. The airmen welcomed and made room for their white counterparts and they easily found common ground eating, sleeping, and talking together about their missions, aviation and their adventures in life.

Years later, at reunions of those who served, Lumpkin says he heard from men in the bomber crews. They were still reflecting on the significance of learning that the men they trusted with their lives were black and how it changed their views. Lumpkin had forgotten about the episode. After all, he said, “we knew who we were. It was just a surprise to the white bomber crews.”

Racism and racial segregation were a part of daily American life, but Lumpkin’s brave service and that of his fellow Tuskegee Airmen would help persuade President Harry S. Truman to desegregate the U.S. military in 1948. Some say that the airmen paved the way for the civil rights movement in the 1960s.

After his honorable separation from active duty service in January 1946 as a captain, Lumpkin used education funds from the GI Bill to earn his undergraduate degree in sociology at USC. He was hired on at the County of Los Angeles as a social worker in 1947, and furthered his education by earning his master’s degree in social work from USC in 1953. He worked for the county’s Bureau of Adoptions and several county departments including urban affairs, community development and model cities. He continued his military service with the inactive Air Force Reserves.

Lumpkin’s experience as a social worker taught him how to view people more objectively. Though he did not care much for the documentation and reporting required in the field, the people he met and assisted only reinforced lessons he had learned in the war.

“You have to give everyone a fair chance and judge them on what they do, not on who they are,” he said.

Lumpkin later shifted out of social work and into other county departments. He retired in 1979 and went on to launch a second career in real estate.

At 100 years young, he owns his own real estate company and is active with several realtor professional organizations. His is an active retirement—he just renewed his real estate broker license for four more years.

Much of Lumpkin’s life has been dedicated to ensuring the legacy of the Tuskegee Airmen. He has served on the boards of Tuskegee Airmen, Inc. (TAI) and Tuskegee Airmen Scholarship Foundation, also serving as president of the Los Angeles Chapter of the TAI.

“The Tuskegee Airmen were not recognized after the war,” he said. “People didn’t believe us when we told them what we did, and our work wasn’t documented anywhere.”

Returning stateside, Lumpkin and his fellow airmen faced just as much discrimination as they had before the war. It was only through the diligent efforts of organizations such as the TAI that their stories became widely known. It took six decades before their valor was recognized in March 2007 with the Congressional Gold Medal, the highest honor Congress can bestow on a civilian.

A statement by President Obama (then a U.S. Senator) issued in 2007 underscored the impact of the airmen. In part it read: “My career in public service was made possible by the path heroes like the Tuskegee Airmen trailblazed.”

Lumpkin was proud to have been among the Tuskegee Airmen invited to attend Barack Obama’s inaugural ceremony in 2009. He sat on the west front of the Capitol on that cold January morning, eager to see the first black man sworn in as U.S. President.

Optimism as a Guiding Principle

Reflecting on the characteristics that made him resilient against the many obstacles he faced, Lumpkin said that he has always been an optimist.

The time he served in Italy as part of an all-black unit made a deep and lasting impression on him as a young man that he still remembers with a smile.

“It was a good feeling to be judged by your ability, and not by the color of your skin,” he said.