25 Military Appreciation Month Quotes That Will Inspire You 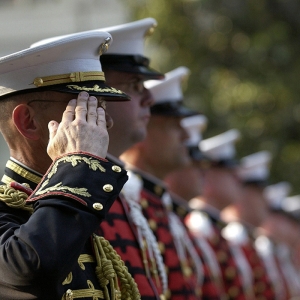 This Military Appreciation Month, take time to reflect on the sacrifices that service members make to ensure our freedom with these 25 inspirational quotes.

During Military Appreciation Month, we honor the bravery of the servicemen and women who risk their lives on behalf of our country and citizens. We hope that these 25 poignant quotes will serve to remind you of the sacrifices that these extraordinary people have made in the service of freedom.

1. The soldier is the army. No army is better than its soldiers. The soldier is also a citizen. In fact, the highest obligation and privilege of citizenship is that of bearing arms for one’s country.
-Gen. George S. Patton Jr.

2. This nation will remain the land of the free only so long as it is the home of the brave.
-Elmer Davis

3. Let no vandalism of avarice or neglect, no ravages of time, testify to the present or to the coming generations, that we have forgotten, as a people, the cost of a free and undivided Republic.
-John A. Logan

4. He loves his country best who strives to make it best.
-Robert G. Ingersoll

5. May the sun in his course visit no land more free, more happy, more lovely, than this our own country!
-Sen. Daniel Webster

6. Never in the field of human conflict was so much owed by so many to so few.
-Winston Churchill

7. On the battlefield, the military pledges to leave no soldier behind. As a nation, let it be our pledge that when they return home, we leave no veteran behind.
-Dan Lipinski

8. Who kept the faith and fought the fight; the glory theirs, the duty ours.
-Wallace Bruce

9. Then join hand in hand, brave Americans all! By uniting we stand, by dividing we fall.
-John Dickinson

10. We often take for granted the very things that most deserve our gratitude.
-Cynthia Ozick

11. What’s right about America is that although we have a mess of problems, we have great capacity – intellect and resources – to do something about them.
-Henry Ford

12. Bravery is being the only one who knows you’re afraid.
-Franklin P. Jones

13. The cost of freedom is always high, but Americans have always paid it. And one path we shall never choose, and that is the path of surrender, or submission.
-John F. Kennedy

14. No man is entitled to the blessings of freedom unless he be vigilant in its preservation.
-Gen. Douglas MacArthur

15. Patriotism is supporting your country all the time, and your government when it deserves it.
-Mark Twain

16. How important it is for us to recognize and celebrate our heroes and she-roes!
-Maya Angelou

17. A hero is someone who has given his or her life to something bigger than oneself.
-Joseph Campbell

18. The brave die never, though they sleep in dust: Their courage nerves a thousand living men.
-Minot J. Savage

19. I have long believed that sacrifice is the pinnacle of patriotism.
-Bob Riley

22. True patriotism isn't cheap. It's about taking on a fair share of the burden of keeping America going.
-Robert Reich

23. These fallen heroes represent the character of a nation who has a long history of patriotism and honor – and a nation who has fought many battles to keep our country free from threats of terror.
-Michael N. Castle

24. The veterans of our military services have put their lives on the line to protect the freedoms that we enjoy. They have dedicated their lives to their country and deserve to be recognized for their commitment.
-Judd Gregg

25. If your actions inspire others to dream more, learn more, do more and become more, you are a leader.
-John Quincy Adams