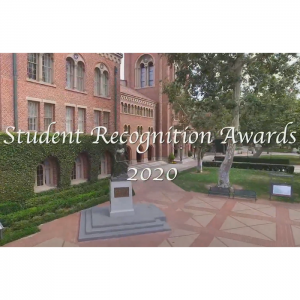 The University of Southern California annually recognizes 240 graduating students whose contributions have significantly enriched the quality of life at USC. These students surpass expectations through their leadership, volunteer work and community engagement. They all share a commitment to bettering their campus, the city of Los Angeles and the world.

Students are nominated by faculty members, and then each nomination is reviewed by at least three faculty and staff members who vote to award the 240 students university-wide.

During this year’s Student Recognition Ceremony on May 14, 2020, three graduate students from the USC Suzanne Dworak-Peck School of Social Work were awarded the Order of Arête, the highest honor accorded to graduate students upon completion of their academic programs.

Lakeya Cherry, DSW ’20, Kelly Smith, DSW ’20, and Samuel Naimi, MSW ’20, distinguished themselves through campus or community leadership roles beyond those required for their program of study. All three were nominated for the award by Clinical Professor Murali Nair.

Cherry is the Chief Executive Officer of The Network for Social Work Management, an international membership organization dedicated to strengthening leadership in health and human services. For her Doctorate of Social Work (DSW) capstone project, Cherry piloted a program, Changemakers of Color, to address the racial leadership gap within the nonprofit sector.

For Cherry, being nominated and honored with the award was a humbling experience. Cherry is a first-generation, woman of color college graduate from San Bernardino, California. For her to obtain two bachelor’s degrees, one master’s and now a doctorate degree is largely due to the social capital, the quality and extent of one’s networks, she obtained along the way

“As more people of color, like me, gain access to social capital, they're getting access to professional role models they may not have had growing up for the opportunities they could have and should be privy to,” Cherry explained.

Cherry pitched her innovative two-pronged Changemakers of Color program to the California Endowment, and was awarded start-up funds to pilot it. The first part of her program looks at providing people of color in the nonprofit sector access to coaching, mentoring and technical training—tools to which they typically do not have access. Cherry believes all of these things increase social capital.

“My program, on one hand, gives them access to things that will give them greater odds at leadership attainment,” Cherry said.

The second part of the model focuses on building a pipeline of leaders of color, providing them the tools they need, and bringing in allies from the sector who are committed to race equity.

“Those in the non-profit sector are devoting their lives and their careers toward working with vulnerable populations and serving those communities who are in need,” Cherry said. “So if they knew and were aware of these gaps as it pertains to their co-workers and those in the community, and they were aware about how representation matters in a diversifying world, then perhaps they'd be willing to do something about it.”

The data showed that the Changemakers of Color pilot was successful. “Beyond the person of color having new access to opportunity, I think that for people who already have the access and opportunity, now their world view and their perspectives are going to be expanded and widened by having a diverse network,” Cherry said. “It has the potential to disrupt norms they might have, even unknowingly, about who is a leader and who is capable of being a leader.”

Cherry plans to grow the program nationally, and to pilot it outside the nonprofit sector.

“I really do what I do with the organization I lead because I feel that we are addressing important gaps in the profession,” Cherry said. “Important gaps as it pertains to leadership and management, and I feel that social workers really have the tools to help improve our society.”

Smith came to the DSW program with a background in gender and social policy, and English education. She had worked at a new all-girls public school in New York City, and loved being able to initiate passion projects involving environmental work and STEAM aspects.

With the inundation of climate reports and environmental news during 2017 and 2018, she chose the Grand Challenge to Create Social Responses for the Changing Environment as the focus for the DSW capstone project. For Smith, it is clear that the exploitation of the earth is connected to the rise of social injustice.

“To me, I feel like this is number one,” Smith said. “Environmental justice as it pertains to climate change really has implications for all of the populations social workers serve. Marginalized communities are hit first and hardest by the climate crisis impacts, and these individuals and groups often times have the most difficulty rebounding.”

Communities of color have historically been marginalized and bear the brunt of environmental injustice. Smith is focusing her efforts on how social workers can recognize this reality and develop interventions that support vulnerable groups and the environment simultaneously.

Smith was a student representative for the Council on Social Work Education’s Environmental Justice Curricular Guide Task Force in Washington, D.C. She helped draft their recommendations for rolling out an environmental justice coursework program that will be distributed to accredited universities across the country in August 2020.

Post-graduation, Smith is starting the Institute for Social Work and Environmental Justice through Adelphi University’s Continuing Education and Professional Development office. She hopes to use the platform to start connecting social workers in the field with actionable, effective programs. She is also building out the first environmental justice certificate program for social workers.

“I think once social workers start making the connections for themselves and seeing how the environment is impacting their population or their clients, then they will find creative solutions,” Smith said. “Involving social workers more directly with environmental justice will keep equity at the forefront of climate change interventions and policy, and I would like to elevate community-supportive ideas and programs as they emerge.”

Naimi spent two years working in the entertainment industry in Los Angeles after earning his bachelor’s degree. He realized very quickly that what he was doing was neither intellectually stimulating nor rewarding.

With a passion for psychology, Naimi decided to use his undergraduate degree in feminist, gender and sexuality studies to focus on his ultimate goal of providing therapy for the LGBTQ+ community.

He used his expertise on gender and sexuality, as well as theories of psychology from working with queer clients, to inform a series of guest lectures and writings at USC. During his graduate studies, Naimi published book chapters about feminist psychology and lesbianism on television through academics seeking contributors.

In addition, Naimi, in collaboration with fellow student Meline Mazmanyan, developed and launched CinemaPsych, a consulting firm for film and television writers who depict therapy on-screen. CinemaPsych’s goal is to influence the way writers develop the roles of therapists in their scripts.

Naimi is now in the process of applying for his Associate Social Work (ASW) certificate. He has connected with a psychoanalytic psychotherapist who works with the queer community and will soon begin his supervised training hours with a view to building his own private practice.

“This award just affirmed for me that I made the right decision,” Naimi said. “It’s also confirmed for me that, even though I want to pursue psychotherapy full-time, I can absolutely use my writing skills in some professional capacity.”