Do You Know About These 10 Scholarships for Children of Veterans?

Children of American soldiers face a unique set of challenges — the expenses of higher education shouldn’t be one of them. Fortunately, there are an ever-increasing number of scholarships available to military children. 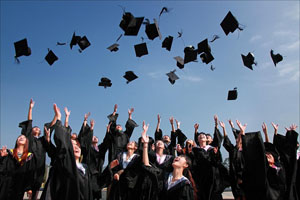 In light of the fact that military children attend an average of six to nine different primary and/or secondary schools – and research indicates that students who bounce among schools often have unique needs – USC has launched the Welcoming Practices Consortium, an initiative funded by the Department of Defense Education Activity that ensures school district and staff members have access to the tools they need to create welcoming and effective transition procedures for students.

But what about help with higher education? When considering the financial feasibility of college, service members and their families frequently overlook the more than $300 million in scholarships and grants reserved specifically for them.

With that in mind — and in honor of April as the Month of the Military Child — here are 10 college scholarships available to military children.

The Army Scholarship Foundation awards one-year, merit-based scholarships ranging from $500 to $2,000 to children of regular active duty, active duty Reserve or active duty National Guard U.S. Army members in good standing. The awards are intended to cover expenses at accredited educational or technical institutions, and may be renewed annually for a total of four years of support (conditional upon satisfactory academic performance).

The Marine Corps Scholarship Foundation has been active since 1962, making it the nation’s oldest provider of need-based scholarships for military children. In its 54-year history, the foundation has awarded over 37,000 scholarships totaling more than $110 million, half of which have gone to first-generation college students. Support is available to children of active duty, Reserve or veteran U.S. Marines. Scholarships can be used for either degree-granting undergraduate or associate programs, or non-degree certificate or vocational programs.

The Gold Star Scholarship Program covers $500 to $2,500 of education expenses per year for children of sailors and Marines who died while serving on active duty or after retirement. Applicants must have a demonstrated financial need and may apply for renewal for four academic years.

The American Legion Auxiliary funds the Children of Warriors National Presidents’ Scholarship, an award given in $5,000 denominations intended to help fund study at a four-year, accredited undergraduate institution. Children, grandchildren and great-grandchildren of veterans who served in the Armed Forces during certain eligibility windows for membership in The American Legion (listed on the ALA website) can apply.

Available to the children of active duty, Reserve/Guard or retired military commissary customers, the Fisher House Scholarship for Military Children Program offers applicants a $2,000 grant to be used at either a four-year undergraduate college or university or a two-year community college. The program has provided more than 10,000 students with a total of $16.7 million in scholarships over its 17-year history.

9. No Angel Left Behind Scholarship

Founded to honor those who have made the ultimate sacrifice for their country, No Angel Left Behind awards scholarships ranging from $1,000 to $5,000 to children whose parent has been killed in active duty on foreign soil. To be eligible, students must intend to pursue a degree in liberal arts, education, economics, finance, engineering or science at a fully accredited college or university.

Unmarried dependent children of men and women enlisted in the U.S. Coast Guard may apply for scholarships in varying denominations from the Coast Guard Foundation. Students are encouraged to apply funds to either an accredited college or an approved technical school.