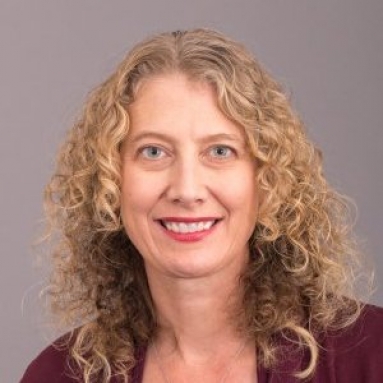 Christina Paddock joined the school in 2013, teaching courses at the Virtual Academic Center. In 2016, she transitioned to the University Park Campus as a full-time clinical field faculty working with the public child welfare stipend programs. As a licensed clinical social worker in California, she has worked for more than 20 years in the field of public child welfare and early intervention. She began her career as a program specialist at the Department of Children and Family Services, where she was involved in the countywide implementation of family preservation. After receiving her master’s degree in social welfare, she worked at The Guidance Center in Long Beach, a county-contracted mental health agency providing therapy to children and families involved in DCFS. During this time, she developed an interest in the use of play therapy for children impacted by abuse or neglect. Paddock also has a special interest in working with people with developmental delays or disabilities. For more than five years, she oversaw health and wellness programs for clients receiving services through South Central Los Angeles Regional Center. More recently, she led the prevention and early intervention department at Westside Children’s Center, which included the oversight of programs like Early Head Start, School Readiness and Special Needs. Throughout her career, Paddock has been an advocate for children in the child welfare system. She was appointed to the Los Angeles County Commission for Children and Families and acted as vice-chair of the commission and co-chair of the Childhood Wellness Committee. Her work on the commission resulted in a countywide policy to address childhood obesity. She also served as region I director for the California Board of the National Association of Social Workers and chaired the Image Council, which was tasked with the goal of educating the public about the important role of social workers. She received her bachelor’s degree in psychology from Claremont McKenna College and her master’s from the University of California, Los Angeles.