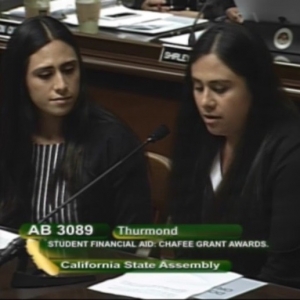 Carmen Noyola, left, and Lucero Noyola testify in the California State Assembly in support of AB 3089

It wasn’t enough for Lucero Noyola to beat the odds by earning her bachelor’s degree.

A former foster youth, Lucero is not only on track to earn her MSW from the USC Suzanne Dworak-Peck School of Social Work in spring 2019, but she has also done something even more exceptional: She helped advocate successfully for new legislation and a California state budget item to help other former foster youth access funds to pursue education after high school.

The passage of these new laws this fall extended the age limit for former foster youth to apply for Chafee Education and Training Vouchers and added $4 million from the state’s budget for the grants. An outreach component aims to ensure the word gets out to those who could benefit.

The Chafee grant, as it is called, is the only source of financial aid dedicated solely to foster youth and those who have aged out of the child welfare system. It provides up to $5,000 to help former foster youth afford books, transportation, childcare and other expenses that aren’t covered by scholarships or financial aid. Previously, the Chafee cut-off for Californians had been age 22, which didn’t always provide enough time for those eligible to benefit. This year, a grassroots campaign involving former foster youth, including Lucero and her twin sister Carmen Noyola, a USC student simultaneously working on her bachelor’s degree in NGOs and Social Change at the USC Dornsife College of Letters, Arts and Sciences and a Master of Planning at the USC Price School of Public Policy, advocated to expand eligibility to age 26 and increase the budget by $4 million.

A history of advocacy

Advocacy was a natural fit for Lucero. She understood the challenges firsthand that sit behind the low numbers of former foster youth who are able to earn degrees. Emancipated foster youth face challenges such as homelessness, unemployment, incarceration, substance abuse and early parenthood. All are issues that Lucero and Carmen knew either firsthand or within their family. Just 8 percent of former foster youth have earned an associate degree or higher by their 26th birthday, compared to 46 percent of the general population, according to the Higher Education Outreach and Assistance Act for Foster Youth. Less than 1 percent have earned master’s degrees.

First, Lucero helped create briefing materials and fact sheets for Kirk and Jesse Aguiar, director of Journey House’s Beyond Foster Care program, to use in their work with legislators. Soon after, Aguiar asked if she would tell her own story to legislators of growing up in the foster care system and how she became a USC student.

Accustomed to sharing her stories when applying for scholarships and other types of aid, Lucero agreed to give it a try. “I knew the research portion and my own experience in the system like the back of my hand,” she said.

But in the hallway outside the hearing room, nerves took over and she ran into the restroom to compose herself. “I realized what we were doing and how big it was. It was a really powerful moment,” she said. “After that, I knew this is the way we can use our voices and our stories to create change.”

Assembly Bill 1567, the Higher Education Outreach and Assistance Act for Foster Youth, was signed into law in October 2017, requiring California state universities and communities colleges to reach out to former foster youth about on-campus resources just for them.

“We're always vulnerable when we’re telling our stories [of growing up in foster care],” Lucero said. “But in that setting [of the hearing],I didn’t feel vulnerable anymore. I felt empowered to be sharing my story for a cause. That’s what I fell in love with.”

Buoyed by their success, the following year the small team from Journey House decided to ask for an age expansion to the Chafee grant. Soon after, with consultant Kirk’s coaching and guidance, the group decided to also ask for a budget item to provide more funding. They put their support behind two bills carried by Assemblymembers Tony Thurmond and Sydney Kamlager-Dove that contained the budget item, the age expansion, as well as a requirement for the state to do more outreach to ensure foster youth know about it and can apply.

This time, Lucero joined her twin sister Carmen Noyola who testified in Sacramento about how the Chafee’s age limit kept her from benefiting from the funds. She had become a mother at age 17 and started working to take care of her child. She enrolled in community college, but it was too much with her other responsibilities. “I started back at school at age 22, when I had the parenting thing a little more under control,” Carmen said. By then, she was ineligible for Chafee funds. Her story resonated with the lawmakers.

Carmen remembers the day she learned the bills would become law. She was at her apartment with her son Adam, her sister Isabel, and her friend and fellow USC student Christina Maricic when she got the news from Aguiar. Carmen’s emotions bubbled into tears. Maricic, who is also a former foster youth, started to cry, too. The age expansion means that Maricic will now be eligible to tap into Chafee funds.

The nerve-wracking experience of testifying was worth it.