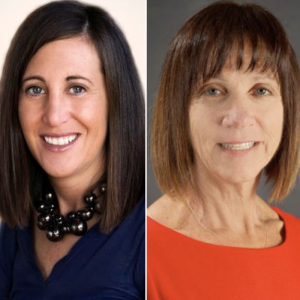 Two faculty members of the USC Suzanne Dworak-Peck School of Social Work have received the prestigious Fulbright Specialist Program award from the U.S. Department of State to further their research internationally. Clinical Professor Emerita Anne Katz and Clinical Associate Professor Jennifer Lewis are among a highly select number of USC faculty awarded in 2020 and 2021 (with 2020 awards deferred due to COVID-19). USC is among only 17 universities named Fulbright top-producing institutions.

Both professors are focused on the implementation of programs that address contemporary issues for underserved populations in innovative ways.

Katz will work with the Oxford Institute of Population Aging in England to expand the research she has done in the U.S. and Canada on aging inmates in prison, particularly women. She will deliver a series of masterclasses at Oxford that will be open to the public and promote better understanding of what aging is and how it can impact life in prison at both the individual and institutional levels. She will also be studying the prison system in England for insights into how their policies and programs around aging differ from those in the U.S.

Lewis will be continuing her transdisciplinary, community-driven approach to suicide prevention by restricting access to lethal means. She is the co-author of “Organizing for Suicide Prevention: A Case Study at the Golden Gate Bridge,” which outlines a methodology for community organizers across the country to replicate suicide prevention techniques for locations frequently used for suicide in their communities. Lewis will study how the social, political and economic models of other countries and cultures impact this methodology. She is evaluating several international suicide bridges as potential locations for her Fulbright research, including the Foyle Bridge in Derry Northern Ireland in collaboration with Queen’s University in Belfast.

“I am so pleased that Professor Katz and Professor Lewis will be representing the Suzanne Dworak-Peck School of Social Work,” said Sarah Gehlert, dean and Ernest P. Larson Professor of Health, Ethnicity, and Poverty. “This is a tremendous opportunity for them to share their novel research with an international audience and garner new knowledge from our colleagues in other nations.”

Prison is a microcosm of the outside world

From a public health standpoint, prisons are microcosms of the outside world and face the same issues with aging, but exacerbated and accelerated by prison conditions. Aging men and women are the most rapidly growing population in U.S. prisons, with one study projecting that by 2030 elderly inmates will account for one third of U.S. prisoners. The exponential rise in the number of older inmates is creating new and costly challenges for the criminal justice system. There is little to no accommodation for aging in the current prison system, from accessibility for wheelchairs and other assistive devices to the simple challenge of climbing up onto a top bunk.

“Everything that’s going on in the outside world is also going on in the prisons,” Katz said. “Most people never really think about how people in prison deal with the issues we all face as we age and what that means for our prison system in the U.S.”

Much of Katz’s work has been focused on aging female prison inmates, who have different social and psychological needs than male inmates. Approximately 90% of women behind bars for killing men were physically abused by their victims according to one advocacy group. Female inmates overwhelmingly suffer from trauma, often caused by domestic violence as well as depression and substance abuse. Research has found that approximately 80% of female inmates met the criteria for one or more lifetime psychiatric disorders and up to 70% were symptomatic. The conditions in prison, such as isolation, institutional dependency and loss of identity, exacerbate these conditions and may make these elderly female inmates even more prone to abuse and predation.

Katz’ Fulbright research will help to address the need for a multi-disciplinary approach to the complex health and social needs of people growing old in the criminal justice system and support a better understanding of how to apply both novel approaches and current models to these issues.

Lewis’ research focuses on the other side of the lifespan spectrum: lives cut short by suicide. Suicide currently accounts for nearly 1 million deaths annually worldwide and is the tenth leading cause of death in the U.S., and second among 16-24 year-olds.  Despite The National Institutes of Health spending an estimated $239 million on research into suicide and suicide prevention in 2021, suicide rates have increased 33% in the last 20 years according to the CDC.

In 2019, 12 million American adults seriously thought about suicide yet very few people actually attempted to carry out the intention. For this reason, a promising suicide prevention strategy may be restricting access to lethal means in addition to individual mental health interventions.

“The experience of suicidal ideation may be chronic, but acting on those ideas is usually fleeting,” Lewis said. “A barrier may be simple suicide prevention technique, but it interrupts the temporary impulse to act.”

Lewis’ work takes a transdisciplinary approach to suicide prevention using a community organizing and human centered design framework. She collaborated with Paul Muller, the executive director of the Bridge Rail Foundation at the Golden Gate Bridge, to create a methodology for community organizers across the country to enact change around suicide hotspots in their own communities. Lewis has implemented this this methodology herself, using it to help organize stakeholders in her own community with prevention system at the Coronado-San Diego Bridge.

“This project brings together unusual collaborators: local neighborhood and community organizers, mental health advocates, transportation authorities and government bureaucrats,” Lewis said. “It has upended everything we thought we knew about suicide prevention. Most importantly, it puts the tools for creating change into everyone’s hands.”

Lewis plans to use her Fulbright experience to explore how these methods of restricted access could be applied in other countries, and with the aim of enhancing worldwide strategies around suicide prevention.