Understanding Climate Change as a Social Issue: How Research Can Help 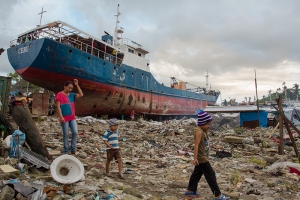 Earth’s increasingly deadly and destructive climate is prompting social work leaders to focus the profession’s attention on one of humanity’s most pressing issues: environmental change.

Typhoons are hitting the South Pacific with greater severity and regularity. Hurricane Katrina prompted the largest forced migration of Americans since the Civil War. Civil conflicts and instability in the Middle East and Africa are being linked to climate change and its socioecological effects.

“We see it perhaps most importantly as a social justice issue,” said Lawrence Palinkas, the Albert G. and Frances Lomas Feldman Professor of Social Policy and Health at the USC Suzanne Dworak-Peck School of Social Work. “Generally the people most affected by climate change tend to be the poor, older adults, children and families, and people with a history of mental health problems — populations that are typically the focus of social work practice.”

This inherent link between social work and the social and economic consequences of environmental change is at the heart of a new initiative Palinkas and other social work scholars are leading as part of the Grand Challenges for Social Work.

Organized by the American Academy of Social Work and Social Welfare, the national effort seeks to achieve societal progress by identifying specific challenges that social work can play a central role in overcoming — in this case, creating social responses to the changing environment.

“Where we see social workers playing a role is developing an evidence-based approach to disaster preparedness and response,” Palinkas said. “How do we provide services to communities that are devastated by natural disasters? How do we help populations that are being dislocated by virtue of changes in the environment?”

Not addressing this issue is likely to have dire consequences. At a policy meeting in London in December, military experts warned that dramatic shifts in the natural and built environments could trigger a major global disaster in the near future.

“Climate change could lead to a humanitarian crisis of epic proportions,” retired Brig. Gen. Stephen A. Cheney, CEO of the American Security Project and a member of the U.S. Department of State’s Foreign Affairs Policy Board, said in prepared remarks. “We’re already seeing migration of large numbers of people around the world because of food scarcity, water insecurity and extreme weather, and this is set to become the new normal.”

To describe their vision for social work’s role in this grand challenge, Palinkas and his partners outlined three main policy recommendations for the profession.

The first recommendation centers on reducing the impact of disasters such as extreme weather events. Climate-related catastrophes affect more than 375 million people every year—an increase of 50 percent compared to the previous decade.

Palinkas emphasized the need to develop and spread evidence-based interventions to combat that risk and respond in the wake of disasters, in part by ensuring that all clinicians and social work students receive training in disaster preparedness and response as a critical component of the job.

“That includes things like training communities in the use of evidence-based practices to provide treatment for traumatic symptoms in the aftermath of a disaster,” he said. “We also need to promote social cohesion and community resilience to mitigate the possibility of social conflict.”

Leaders from the USC Suzanne Dworak-Peck School of Social Work are ahead of the curve in tackling that piece of the puzzle, most notably in the Pacific Rim. In recent years, for example, a team of researchers and practitioners from the school has led humanitarian missions to the Philippines following major typhoons.

Faculty members Marleen Wong and Vivien Villaverde are among those who have traveled to the South Pacific to offer training sessions on delivering psychological first aid, addressing secondary post-traumatic stress and promoting social development.

“In many parts of Asia, the infrastructure for disaster response and recovery is weak,” said Villaverde, a clinical associate professor with expertise in disaster preparedness, crisis interventions and trauma-informed care. “At the same time, that’s where a lot of climate-related natural disasters are occurring.”

Social workers can assist during recovery efforts by offering interventions and training others to use them, she said, but broader efforts to prepare for and respond to crises are needed.

Although the USC team has generally focused on the intervention component, Villaverde noted an increasing emphasis on the multi-tier framework described by Palinkas and other scholars in the Grand Challenge policy brief, which calls on governments and private organizations to begin planning for climate change and related disasters at a national and community level.

Wong echoed the need for countries like the Philippines to move beyond merely reacting to environmental disasters, particularly in terms of developing proactive plans that outline how various government agencies, community groups and individuals can prepare for and respond to catastrophes.

“Social work has a clear role to play in building that safety net,” said Wong, senior associate dean of field education and clinical professor. “We can bring our knowledge and skills and develop additional ways of supporting people, especially children and families, in the wake of these natural disasters.”

Another critical issue highlighted by the Grand Challenge team is the emergence of a new class of displaced individuals, known as environmental or ecological refugees.

Environmental factors have caused an estimated 25 million people to relocate, according to the policy brief, and that figure is expected to skyrocket to 250 million by 2050. Examples include rising sea levels that are forcing Pacific Islanders to seek asylum in New Zealand, the devastating flooding of the Lower Ninth Ward in New Orleans that displaced thousands and the recent conclusion of the United Nations Security Council that climate change prompted the war in Sudan.

“Of course people want to leave North Korea due to the harsh political environment, but the reality is most are leaving because the agricultural system was destroyed by devastating floods beginning in the 1990s,” Palinkas said. “Even this year, what little had been rebuilt was again wiped out by a series of historic floods.”

A major problem is these individuals have no legal status under the United Nations mandate to protect and support refugees, he said. Because they are denied protections offered to people fleeing from war or conflict, they may not have access to care or shelter, are unable to plan for the future and are afforded little dignity.

“They might not be leaving because their lives are being threatened, but threats to their livelihood are forcing them to migrate,” Palinkas said. “People who may not have had difficulties in generating income through agricultural activities are suddenly being forced to relocate because they can’t grow crops anymore.”

In addition to raising awareness and advocating for policy changes to ensure these individuals are supported, he said strategies are needed for long-term relocation of these environmental migrants.

Finally, the Grand Challenge authors are calling for increased focus on the effects of urbanization and the inclusion of marginalized communities in planning for inevitable environmental changes. Experts expect two-thirds of the world’s population will be living in cities by 2050, which means increasing demands on infrastructure and service systems, new threats to security and increased density.

“How do we accommodate more people in the same amount of space?” Palinkas said. “How can we provide adequate support systems — not just physical but governmental, service-related, health care-related — to people living in these urban areas?”

Policies need to be developed that ensure equitable use of space, provide housing to all, protect the natural environment and create access to services and jobs. A critical component of developing those guidelines is giving a voice to vulnerable communities that have been left out of previous planning efforts.

Doing so will ensure that marginalized groups, particularly low-income individuals and people with racial and ethnic minority backgrounds, will not be disproportionately harmed by changes in urban and regional environments.

One effort to give voice to individuals interested in tackling climate change at the grassroots level is CYPHER, a technology-focused initiative led by R. Bong Vergara, an adjunct assistant professor at the USC Suzanne Dworak-Peck School of Social Work.

In collaboration with Los Angeles CleanTech Incubator and other local partners, the program encourages teens and young adults from the United States, China and Kenya to develop social and technological strategies to address the human impact of climate change — ideas they present at CYPHER’s signature event, the Sustainable Earth Decathlon, each spring.

“Our work creates a pipeline of clean technology and tech-enabled solutions to local manifestations of climate change,” Vergara said. “Although we are interested in solutions, we are profoundly compelled by our target outcome, which is a shift in identity among these youth from non-innovators to tech innovators.”

He described one participant, the son of undocumented farmworkers, who had to ask his parents for permission to go to school and take part in CYPHER, which took him away from assisting with farm labor.

That personal background proved invaluable, Vergara said; the student helped invent an app-enabled irrigation system that shows farmworkers and landowners which parcel of property needs water the most. It earned top honors at the annual competition.

“The insight from his direct, personal experience of the impact of a heat wave on their farm was really instrumental in making the innovation that his team came up with rise to the very top,” Vergara said. “He saw the impact, financially, emotionally and socially, of solving the overlap of food, energy and water systems in the fields of his community.”

Many of the goals of the Grand Challenge team are broad and seemingly nebulous, so developing metrics that highlight progress could prove difficult. However, Palinkas said markers such as reducing the prevalence of environmentally induced diseases by a certain percentage might serve as signals of success.

In general, many are encouraged the Grand Challenge and the overall concept of responding to environmental change from a social perspective is gaining awareness among social workers and others in the helping professions.

“I think social work is really well positioned to address this challenge,” Wong said. “Social workers never work alone; they always work as a team. In these complex situations, we need to build teams to enhance the national capacity to respond.”