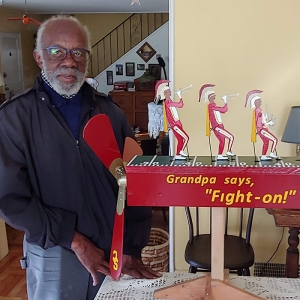 Ted Lumpkin, Jr. on his 100th birthday with his "whirligig," a handmade gift from his son, Ted Lumpkin III.

In his 100 years, Ted Lumpkin, Jr. experienced more than most, but considered his family to be his greatest achievement.

After World War II ended in 1945, well-paying and stable jobs for Black men and women with college degrees were limited. The growing field of social work was among the occupational areas with a hot job market. So it was that Army veteran Ted Lumpkin Jr., after earning his bachelor’s degree in sociology from USC in 1947, found himself employed as a social worker for the Los Angeles County Bureau of Public Assistance.

It was at the LA County Bureau that the former Tuskegee Airman met his future wife, Georgia. As a secretary for the Bureau of Adoptions, she recalls noticing that USC social work classes were taking place on-site in the downtown Los Angeles building where she worked. For young Black men and women aspiring to earn a good living, social work was a popular option, she said, because the need for social workers was so great after the war that most were guaranteed to find a job. Lumpkin went on to earn his Master of Social Work from USC in 1953.

“Ted worked in independent adoptions and he didn’t say much about his daily work,” Georgia said. “But he did tell me that the happiest people on earth are those he met through that process.” Couples were often so grateful for his assistance in achieving their dreams of having a child that they would leave gifts large and small at the house as tokens of appreciation.

“I don’t know how they knew where we lived,” Georgia said. “We would get bags of pecans and fruit, and once even a set of chairs made of bent plywood just turned up in the backyard.” She did not remember notes accompanying the gifts, but assumed they were all from happy couples transformed into mothers and fathers through adoption.

“Like a lot of WWII veterans, Dad didn’t talk about his wartime experiences,” his youngest son Ted Lumpkin III said. “He was the only Black person in his officer class, but never gave the sense that he was persecuted. Instead he told us that we needed to stand on our own two feet and keep moving forward.”

Part of the first Black flying unit in American military history, Lumpkin returned to the U.S. after the war hoping that the Tuskegee Airmen’s success in combat overseas would make a difference in race relations. It did not. Though their work is credited with bringing about integration of the U.S. military, the interpersonal reality in the postwar years was that people discounted and even doubted their accomplishments. “It got to the point where you just didn’t tell people what your experiences were, because they wouldn’t believe you,” Lumpkin said in an oral history recorded in 2011 for the Veterans History Project of the American Folklife Center, Library of Congress.

Lumpkin, who served in a military intelligence position in the unit, got involved with the Tuskegee Airman Inc., an organization dedicated to preserving and communicating the history of the unique unit. The Tuskegee Airmen were finally recognized with a Congressional Gold Medal in 2007.

As the story of the Tuskegee Airmen gained more visibility through film, television and public recognition, acclamation was bestowed upon Lumpkin and his fellow veterans belatedly. “I didn’t know my dad was a celebrity until maybe the last 15 or 20 years,” said Ellen Lumpkin Brown. “He was simply my dad who was always there for me.” She remembers going to picnics and events with the other Tuskegee Airmen and their families as a child and teen, but did not know much beyond the fact that they all served together in the war.

Socially active until the end, Lumpkin would attend events and accept speaking engagements across the U.S. and beyond to make sure the real story of the Tuskegee Airmen was told. To him, it was important that younger generations knew and understood the obstacles overcome and achievements made at a time when some people argued that Black people were less capable of certain jobs, like flying planes, than white people.

Lumpkin never accepted the notion that his capabilities were inferior and he made sure his children did not either. “He saw education as an equalizer,” Ellen said. A degree from an institution provided objective verification of your qualifications. “He would say that education can’t be taken from you,” she said.

Lumpkin’s mother had a college degree, a highly unusual achievement for a Black woman living in the U.S. in the early 20th century. Although, at the time, society gave her few opportunities to make use of it. For Lumpkin’s children, attending college after high school was understood as the logical next step.

High achievers all, each of the four children earned undergraduate degrees, and Kelly and Ellen went on to get master’s degrees as well. Today, both of them own their own businesses: Kelly provides telecom solutions to small businesses in Raleigh, North Carolina, where he resides. Ellen is a successful sewing artist and patternmaker known for her pop-up Sew It! Workshops held in libraries, schools, museums, churches and more through her studios in South Orange and Newark, New Jersey and virtually. Eldest son Tim, who earned a bachelor’s degree from UCLA, passed away in 1980.

Ted Lumpkin III, who still lives in Los Angeles, retired from Boeing a few years ago. In addition to other interests, he spends time flying the acrobatic plane he built from scratch. One of the proudest moments of his life, he said, happened at a 2005 community air show at Compton Airport right after he finished building the plane. A crowd, including other Tuskegee Airmen, applauded as he did a few low passes with the plane, with his father in the backseat enjoying the ride.

For Ellen and her brothers, that devotion to family and the creation of a shared set of values is their father’s most notable legacy. “In his grandchildren and great-grandchildren you see his values living on,” Ellen said. “They are each solid citizens, achieving and working in their communities beyond what you need to do just to pay rent.”

Since Lumpkin’s death in December 2020 from complications related to COVID-19, national and international news coverage has been focused on his legacy as a Tuskegee Airman. While it celebrates his rightful place in U.S. military and Black history, that specific focus shifts attention from the accomplishments of which he was most proud: his family.

“I think my dad would have been surprised and probably a little bit embarrassed by all this attention,” Ted Lumpkin III said. “In his view, he had done a lot since the Tuskegee Airmen days and took pride in being a good father and family man.”

For his children and grandchildren, he has left behind a wealth of memories as well as the lasting example of how to live one’s life honoring the values of resiliency and integrity.

“When I think about his legacy, it is probably this: just do the right thing. You can point out what’s wrong in the world but you can’t correct it all. You change what you can change and otherwise do the best with what you’ve got,” Kelly said.