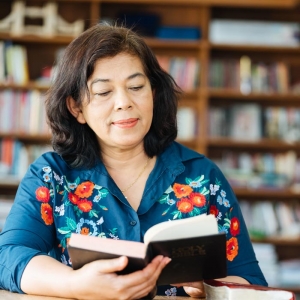 Cognition refers to the mental processes that encompass thinking, perception and memory—in essence, the conscious experience as we know it. Cognitive deterioration transpires when thought capacity, perceptivity or ability to remember decreases. Serious cognitive deterioration is generally the result of one or more types of dementia—which is, according to the Alzheimer’s Association, “a group of symptoms associated with a decline in memory or other thinking skills severe enough to reduce a person's ability to perform everyday activities.” Alzheimer’s disease is the most common form of dementia.

“Alzheimer’s disease and related dementias can be extremely taxing on both individuals experiencing memory loss and family caregivers who provide ongoing support to them,” she said. For example, Medicare beneficiaries age 65 and older with Alzheimer’s or another another form of dementia pay, on average, close to $11,000 out-of-pocket annually to pay for health care and long-term care. What’s more, many unscrupulous phone telemarketing schemes target people with declining memory and poor judgement.

Scientists have yet to discover either a cure or develop a disease-modifying treatment for types of dementia such as Alzheimer’s disease. However, there is widespread consensus regarding the existence of modifiable risk factors that can significantly delay or slow cognitive decline due to Alzheimer’s disease. To promote brain health, experts, including Aranda, recommend consulting with one’s primary doctor about any memory concerns and putting lifestyle changes into practice sooner rather than later.

“You can make positive lifestyle changes that promote mental, physical and emotional fitness while combating cognitive decline,” she said.

According to research from the National Academies of Sciences, Engineering, and Medicine (NASEM), the three most effective steps one can take to promote brain health are engaging in regular cognitive training activities, managing blood pressure and increasing physical activity. Here’s how these strategies can boost brain health:

Research has revealed a connection between lower levels of formal education and an increased risk for dementia. Experts speculate that receiving less formal education at a young age provides individuals with less “cognitive reserve.” Cognitive reserve refers to the brain’s resilience, or the ability to maintain somewhat regular cognitive functioning despite neuropathological brain changes brain associated with dementia.

“To build up—and maintain—cognitive reserve, NASEM advises incorporating memory games, problem-solving challenges, reasoning exercises and speed-processing activities into your routine from as early an age as possible,” Aranda said. She clarified that while cognitive training alone may prove beneficial, its effects may be enhanced by the following two strategies.

Hypertension, or high blood pressure, has long been linked to increased risk for dementia.

NASEM found that taking antihypertensives is the most common way that sufferers of high blood pressure reduce their blood pressure to recommended levels. However, Aranda advises taking a preventative approach to blood pressure management.

“Particularly in mid-life, it’s important to monitor your blood pressure, and if necessary, implement lifestyle changes—such as exercising more, eating a balanced, low-sodium diet, and limiting alcohol and tobacco intake—that can help reduce cognitive decline down the road,” she said.

Exercise may play an extremely important role. A variety of studies support the relationship between increased physical activity and reduced risk of cognitive decline. Fortunately, there are brain health benefits that one can reap from being more active in any way they choose—whether by engaging in activities such as gardening or hiking, signing up for an exercise class, or learning a new skill such as dance or yoga.

From a practitioner's perspective, Aranda says that “the key to motivating community members to make lifestyle changes that promote brain health is to gain an understanding of their perspective and to speak to them in accessible, culturally informed terms.”

She recalled a scenario in which one patient was struggling with depression—another modifiable late-life risk factor for cognitive decline. “My patient was from a familialistic and socio-centric culture,” Aranda said. “So it made more sense to say, ‘why don’t you take brisk walks with your grandchild?’ rather than ‘you should get more exercise.’”

Though no cures yet exist for the brain changes that cause cognitive decline, creating treatment strategies that are both culturally attuned and evidence-based can offer both lifestyle changes and a sense of hope that result in improved patient experiences.

“By meeting patients where they are medically and culturally, we can encourage healthy lifestyle changes that not only lessen the effects of cognitive decline but also help relieve the psychological burdens it comes with,” Aranda said.

Aranda, who is also director of the USC Alzheimer’s Disease Research Center (ADRC) Outreach, Recruitment and Engagement Core, recommends enrolling in studies that increase understanding of how the brain works and the factors that can promote optimal brain functioning. One of over 30 nationally recognized Alzheimer’s Disease Research Centers, the USC ADRC accepts referrals from persons interested in research participation.