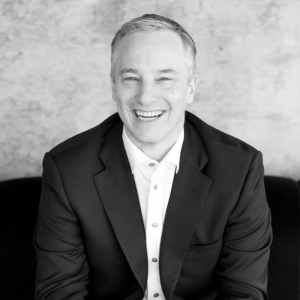 On May 11, 2022, John Oberg walks the stage to receive his Doctorate in Social Work (DSW) from the USC Suzanne Dworak-Peck School of Social Work, a long-held goal for this self-described “Trojan for Life” whose grandfather, a surgeon, taught in the USC medical school and whose mother is a USC alumna. He began a pre-med undergraduate degree at USC and then his path led him elsewhere, in the process earning a BA and then an MBA with concentrations in management of technology, policy and planning. Now a quest to bring systems thinking to solve the puzzles of chronic disease healthcare brought him back to USC for an applied doctoral program geared specifically to mid- to late-career professionals. Oberg has already implemented his capstone project as a full-scale medical practice in his current hometown of Austin, Texas using technology and new protocols to treat patients with comorbid chronic diseases to make dramatic differences in their short- and long-term health management.

“We need to think about comorbid chronic disease the same way we think about infectious disease or other specialties of internal medicine,” Oberg said. “There’s a whole field missing here and we think we’re leading the way to show people how that can work.”

According the Centers for Disease Control and Prevention, over half of all adults in the U.S. have a chronic disease — such as diabetes, hypertension or heart disease — and 27% suffer from multiple, comorbid chronic diseases. Chronic disease is the leading cause of death and disability in the U.S. and accounts for 44% of all deaths worldwide.

Multiple chronic conditions (MCC) often combine with factors like socioeconomic status and chronic mental illness such as depression or anxiety, to create clinically complex cases or where diseases are treated as separate, unrelated conditions. Precina Health, the medical practice Oberg co-founded, focuses exclusively on patients with MCC, taking an integrated, long-term and technology-enabled approach to treating these complex cases that is specifically designed for low-income and rural populations.

The "Precina Way," as Oberg has dubs the method, begins with Precina’s chronic disease triage tool available through a smartphone app and online patient portal. The app tracks patient medications and key indicators, such as blood glucose level for diabetics, allowing prescribing providers to titrate medications as often as every three days to get the chronic conditions under control. Exception reporting allows providers to proactively reach out if patients miss a medication dose or insulin injection, to see if they need additional support. The goal is to manage patients’ primary condition to the extent that providers can begin to reduce medicine dosages while patients make lifestyle changes, while also addressing other chronic conditions, including frequent comorbidities with depression and anxiety.

“We’re meeting people where they are,” Oberg said. “There are very expensive ways of monitoring disease, but that’s not going to work well for someone who is just can’t afford it. So we’re taking the devices they already have access to and know how to use — their phones — and linking them with a patient portal and phone app that are purpose-built for this.”

In a three-month pilot study, the physicians from Precina Health implemented phase one of Oberg’s capstone project with 50 patients who have type-two diabetes as well as other chronic conditions. All but one of the patients had their diabetes brought into control during that time. Most remarkably, in over 14,400 insulin pricks to monitor blood glucose among those patients during that three-month period, there was only one symptomatic hypoglycemia result.

Oberg already had many of the pieces in place for his new approach to treating comorbid chronic disease and the right resume for the job — a business leader specializing in healthcare, commercialization of technology and organizational change — so he was a little surprised when the DSW faculty encouraged him to slow down before diving into implementation of his capstone project.

“They pressed on me to not solve the problem early. I had to deeply understand the problems that I wanted to solve from every angle first," Oberg said. "It was really helpful to get a bright line around the problem, and then to see it from enough perspectives that a solution would actually work in the real world.”

Oberg sees this effectiveness as directly related to the DSW as an applied doctorate curriculum, in contrast with a more research-centered PhD. Both are important, he says, but the DSW plays a significant role in connecting academic research with effective applications in real-world settings. He likens the DSW to an MD or DO in medicine or a PsyD in clinical psychology that are focused on more on practice than research.

“I hope that USC is leading the charge to show people that the DSW is not just a ‘nice to have’ degree, it’s a necessary thing if we’re going to be bringing all of these very complex social systems together for good in the world," Oberg said. "And the people I met in my cohort are absolutely doing it.”

He estimates that only about half of his DSW cohort came from a dedicated social work background; the other half were there for the rigorous, systems thinking approach to solving broad, society-level issues in a humancentric way that could be immediately applied in real-world settings.

“Social work brings in the overarching framework for seeing multiple parts of the world and bringing them together in a thoughtful and logical way to make change. It's the right methodology for solving big problems,” Oberg said. “Social workers’ seat at the table shouldn't just be about the clinical intervention, it should also be about the systems thinking more broadly.”