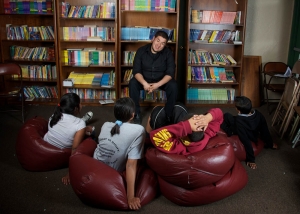 As soon as Erika Braxton-White saw her 10-year-old client, she knew he was struggling with attention deficit hyperactivity disorder, or ADHD. He couldn’t sit still in class for more than a couple of minutes, and what’s worse, he had started to exhibit aggressive behavior, which had led to multiple suspensions.

The boy had recently switched ADHD medications. Since Braxton-White, an Online MSW student at the USC School of Social Work, had written a paper on the behavioral effects of changing ADHD medication – symptoms often get worse before they get better, and can include aggression and even suicidal thoughts – she recognized the signs. And after presenting the case to her fellow social work interns, she knew that she would be able to help her client. She empowered him by teaching him skills that would help him manage his ADHD, such as knowing when to ask for clarification in class, and after just a few of sessions, the boy started to perform better in school.

“As a new social worker, you’re not exactly sure what you’re doing,” said Braxton-White, who led two groups and counseled 13 children during her internship. “But all the education through the trainings and coursework really brings it all together.”

Over the last academic year, the school has partnered with five field agencies in an innovative pilot program to turn them into something more than just field placement providers. These five organizations – ABC Unified School District, Orange County Department of Education, Anaheim Union High School District, The Village Family Services and Shields for Families – have signed on to be “teaching institutions,” a new paradigm in field education that aligns student learning, agency development and university research.

The idea is to foster closer relationships with the school’s existing field agencies and build new, more fruitful ones with others to establish a standardized internship program partly modeled after those medical students complete in hospitals.

“Teaching institutions are viewed as enriched learning environments, where field education and research are brought together,” said Marleen Wong, clinical professor and associate dean of field education. “We want to ensure that what we’re teaching would be applied more effectively in the field and the practice wisdom of agencies would be infused in our curriculum in multi-directional learning.”

Teaching institution field agencies offer student interns monthly trainings aligned with their practicum class lessons, and MSW students get to consult with their peers about cases in a group setting to share treatment plans and goals, like medical students would do in hospital rounds. In this way, MSW students will more quickly develop the language and capacity to consult on real cases. Also in line with the hospital internship model, teaching institutions are required to take on a certain number of interns every year.

When it comes to research, the goal is for evidence-based practices to be implemented in the field. Not only are students, agency staff and field instructors trained in the same interventions, but also agencies would be able to partner with School of Social Work faculty on grant writing and research project opportunities.

Kimberly Medvin, MSW ’99, oversees the social work intern program at Shields for Families, which provides a range of social services for families in South Los Angeles. Medvin said that the teaching institution partnership with the School of Social Work has provided a more structured learning and training framework for better understanding among students.

“The collaboration provides an easier transition between what you’re learning in class and what you’re practically doing in the field,” she said. “There’s cohesion and unity. It’s a huge benefit if we’re all on the same page.”

Medvin also noted the pluses of an increased intern workforce for the communities they serve and the social work profession in general. She said that because Shields has more interns now – 26, up from 10 last year, the majority of whom are from USC – the agency is able to see a greater number of clients, especially those who otherwise may have fallen through the cracks.

“The more students we can get in here and provide with a strong training foundation, the more will be available to work when they graduate not just at Shields but also in the community,” she said.

Second-year MSW student Jessica Garcia, whose field placement is with the Orange County Department of Education offering social support services at Santa Ana High School, said that the training and education she has received as an intern at a teaching institution has eclipsed her previous field experiences.

With workshops that include poverty prevention and substance use trainings, as well as case scenarios and role playing interventions, Garcia said she has learned what is appropriate to do with certain clients.

“The agency has provided a safe learning environment. They want to help you to be better by providing new learning opportunities and extra trainings,” she said. “They gave us those tools to get better at what we’re doing or to learn more on the populations we’re serving.”

Garcia handled nine of her own clients and held group anger management sessions for youth. Many of the kids she worked with were resistant at first because they were forced to be there by their parents. But she soon learned how to get them to trust her.

“I had to find new ways to speak. My tone of voice definitely had to change when I spoke to the kids,” she said. “I explained to them how they would be helped by coming to therapy and made sure they understood the treatment plan and had input in it. I made sure they knew that it was a little bit of them and a little of me, working as a team.”

This kind of interaction that fosters relationships is important to Terri Villa-McDowell, who manages the social services program for ABC Unified School District, where the idea of a community school – one that provides health, mental health, food and clothing services beyond just education – is paramount.

Villa-McDowell pointed out the success one of the district’s social work interns had with a special needs child. The intern built up enough trust with the student that he felt comfortable opening up to her in a way that he had never done before, and he told her something important at a critical time in his family’s life.

“Kids get to know the interns, and they see that an adult cares about them,” Villa-McDowell said. “ABC schools have a commitment to building resilience and safe schools through these trust relationships.”

And for Villa-McDowell, the fact that teaching institutions have increased the number of interns they take on has meant that locally based Virtual Academic Center students, who have varying semester schedules, are now available to perform their field placements during the summer months, a plus for schools. One of these interns proved to be an asset even parents highly valued.

“The principal at one of our schools said that the parents of one of our high-needs kids started calling a couple of weeks before the intern was slated to leave at the end of the semester,” Villa-McDowell said. “They called asking, ‘Why is she leaving? She is the first person our kid has connected to at school.’”