From Student Surveyors to Project Leaders 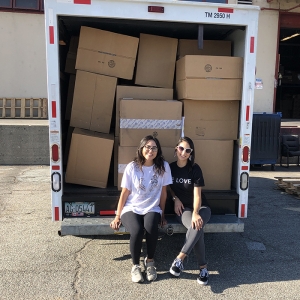 Layan Kaileh, MSW ’18, while earning her bachelor’s degree in social work in Fresno, California, created what she called ‘blessing bags,’ which included toiletries, food, water and a couple of dollars. When out driving, if she saw someone she thought needed help, she would hand them the bag, all ready in her car.

Nicole Wilson, MSW ’18, who grew up in Los Angeles County, felt compelled to be a positive influence for change in any way she could within her community.

“My mom was a single parent at a very young age and she didn’t have a lot of support,” Wilson said. “I always wanted to make sure that the people I came across were able to have supportive adult figures.”

When Wilson and Kaileh began their MSW studies at the USC Suzanne Dworak-Peck School of Social Work, their sights were on clinical work. Kaileh’s specialization was in adult mental health and wellness, and Wilson wanted to focus on children, youth and families.

However, during their first year at USC, they both became involved in the Greater Los Angeles Homeless Count, which the school is contracted to execute in partnership with the Los Angeles Homeless Services Authority (LAHSA). Kaileh and Wilson were trained to conduct a 55-question survey with individuals experiencing homelessness and unstable housing.

The data collected from the count is submitted to the Department of Housing and Urban Development (HUD) and informs how much funding Los Angeles County will receive and how it will be divided among the county’s eight service planning areas. The USC Suzanne Dworak-Peck School of Social Work partners with the USC Leonard D. Schaeffer Center for Health Policy & Economics, who is exclusively responsible for processing all of the data collected over a three-month period and translating this into analytical reports to help identify the services needed by each community.

As student data collectors, Kaileh and Wilson were assigned to be team leaders, each responsible for heading up a team of surveyors covering parts of the county, and asking questions including how long a person has been experiencing homelessness, the reasons why they became unstably housed, basic demographic questions (race, age, gender, etc.), systems involvement and experiences with domestic violence.

“I loved everything about it,” Kaileh said. “It’s a very hectic, chaotic, draining but ultimately super rewarding project.”

For the 2020 Greater Los Angeles Homeless Count, Kaileh, now a staff member of USC, is the project administrator for the demographic survey portion, responsible for managing and executing the unsheltered adult count. From December 2019 to March 2020, her staff of approximately 60 paid surveyors conduct the 20 to 30 minute surveys. The goal, in addition to collecting the numbers for HUD, is to understand the reasons why these individuals are experiencing homelessness. .

Eight teams traverse Los Angeles County to conduct the surveys. The teams include students, youth from the community, and individuals from Chrysalis, a nonprofit organization that employs and provides resources to low-income and unhoused individuals.

Kaileh incorporated a trauma-focused training at the beginning of the project to help team members support each other while out in the field, as the nature of the job could be triggering for surveyors.

“The purpose of the training was to teach skills on how to deal with the second-hand trauma experienced while surveying our unhoused neighbors,” Kaileh said. “It was important for me to create a safe dynamic within the diverse teams.”

Wilson, also hired by USC, is the project administrator for the youth count. This year, for the first time, a new method was created to capture youth data, which covers those under the age of 25. In previous years, the youth count was only conducted during a 10-day period in January. Youth were not allowed to be surveyed during the regular adult demographic count. In 2020, when youth are identified they can be counted during the full three-month period.

The youth population is known as the hidden population―not as easily identifiable and therefore harder to count.

“That’s why we have a separate effort specifically for youth,” Wilson said. “There needs to be concentrated efforts and resources that go specifically toward capturing what the youth experience is.”

Wilson works with a lot of youth with lived experiences to help support and lead the survey teams throughout the county. Her hope is to try to better capture what the youth experience is so that they can improve advocacy for resources and funding.

“Sometimes life has a funny way of leading you to the places and spaces that you were always meant to be in,” Wilson said. “I think it's a really worthwhile space to put energy into counting our young people who are underrepresented.”

Los Angeles has the second largest homeless population in the country, behind New York City. In 2019 the total for LA County was 58,936, which was a 12% increase from the previous year.

“USC is very fortunate to partner with LAHSA to execute this project,” Kaileh said. “Our surveyors connect with people who have had a rough background that has led them to become unstably housed, and it impacts the funding and resources for our unhoused neighbors.”

Wilson stresses the annual homeless count is a massive team effort. Under Kaileh and Wilson’s leadership, they manage their staff going out every day for three months, interviewing people, talking to them and holding space for their experiences.

“This is a huge community-based effort of people that really care about their community and want to make a difference,” Wilson said. “I think that’s a beautiful thing to be a part of.”