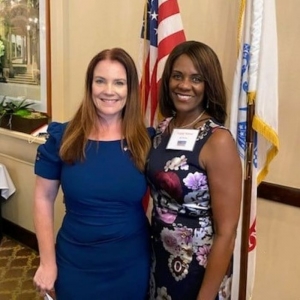 One of the most challenging aspects of military life can be the transition back to civilian life and particularly the civilian workforce. It can be even more so for female veterans who suddenly find themselves thrown into an unfamiliar and unwritten professional dress code after years in uniform.

RanDee McLain, MSW ’14, is a U.S. Navy veteran who witnessed this need among her fellow female veterans and founded Operation Dress Code, which provides professional clothing and other career support services to female veterans transitioning back to work as civilians. In recognition for her work, McLain was recently honored with the Trailblazer Award from the California Department of Veterans Affairs at their 2021 Women’s Veterans Reception on October 27.

Operation Dress Code has grown from a closet with a few donated items six years ago to a full-scale, department-store style event held annually in a hotel ballroom that has served over 2,500 female veterans making the transition to civilian life. In addition to professional clothing, shoes, handbags and accessories, the event has expanded to include volunteers assisting with hair and makeup, taking LinkedIn profile pictures, helping with resume writing and even employers looking to hire veterans.

“I know what it’s like to wear a bun and a uniform for 10 years and not know how to dress any other way,” McLain said. “As veterans, we already face barriers going into the civilian workforce. If we can reduce even one of those barriers for these ladies, we can help set them up for long term success.”

All clothing and services are offered free of charge to veterans. Operation Dress Code also plans to bring their shopping event to Northern California in March 2022 to expand their reach and impact.

“It’s one of the only events geared entirely toward female veterans,” McLain said. “The event also serves as a gateway that gets them talking and often reveals other needs they may not have felt comfortable talking about at first, like housing or mental health.”

Supporting those who serve their country

McLain has made veteran advocacy her life as well as her livelihood. Her Master of Social Work from USC specialized in military social work, which advances the health and wellbeing of our nation’s service members, veterans and their families through innovations in research, education and community. The USC Suzanne Dworak-Peck School of Social Work was the first in the nation to offer a military social work program at a civilian university.

In addition to founding Operation Dress Code, she is part of the complex care coordination team - west at Wounded Warriors Project supporting critically ill and injured veterans. McLain is also a mentor and clinician with the Veterans Treatment Court, assisting veterans in the criminal justice system who have underlying substance abuse and mental health challenges related to military service.

“My USC Social Work education really set me up for a career in social services,” McLain said. “It gave me everything I needed for my work at Wounded Warrior Project helping the most critically ill and injured veterans succeed in the next chapter of their lives. I would never have had that opportunity without USC.”