Social Entrepreneur Dreams Big for Himself and for the Alaskan Community 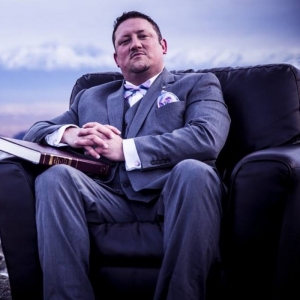 DSW student Ryan Ray dares to dream the impossible. Two of his dreams have become reality, and he is just getting started.

His first big dream was to create a substance abuse treatment center using a mind-body-spirit approach to recovery. In 2009, he founded Set Free Alaska, a Christian based nonprofit dedicated to helping recovering addicts. Today, it posts success rates nearly 40 percent above the state average and is one of the largest, most successful treatment centers in the state.

The second dream was to attend USC, after years of rooting for its football team. But attending graduate school in Southern California seemed geographically and financially out of reach for Ray, who lives in Palmer, Alaska.

Then USC announced its new online degree platforms at the USC Suzanne Dworak-Peck School of Social Work and USC Sol Price School of Public Policy. Ray earned his Master of Public Administration in 2016 from USC Price, and this year enrolled in the social work school’s Doctorate of Social Work (DSW) program.

He still has his USC acceptance letter framed in his home office, a reminder that big dreams can come true.

Now he’s moving on to an even bigger dream, helping the state of Alaska solve a vexing social problem:  keeping its formerly incarcerated residents from returning to jail.

Ray was born in a small town in Minnesota and spent the first half of his childhood in South Dakota. When he was age 10, his parents moved the clan to Alaska, eventually settling in Palmer where Ray lives now. His father was a pastor and his mother an elementary school teacher.

“Although we didn’t have much, my parents taught me from an early age the value of hard work and the dedication it takes to improve the lives of others,” he said.

After moving to Palmer, they lived in the balcony of the church where his father preached—a family of six and two dogs.

“It was quite an experience,” Ray said. “But through it all, my parents’ faithfulness to God and to each other and their dedication to serving others has always been inspiring.”

After high school, he joined the Army as a combat medic and mental health specialist. He signed up for the Army Reserves to get a bachelor’s degree in psychology, ultimately serving more than eight years in both branches of the military. After returning to civilian life, he oversaw a men’s outpatient addiction treatment program.

It was during this time that Ray’s dream to create Set Free Alaska took hold. With the help of a like-minded friend who became the program’s executive director, they built the center from the ground up.

He has always retained a position on its board of directors, but makes it clear to those he serves that he takes no salary for his work at the nonprofit. This earns him their trust and also removes a layer of resistance.

“Some of the people we treat resist our help, saying that we just do this work because we’re paid to care,” Ray said. “And I wanted to be able to say, no, that’s not why I'm here. I’m here because I care.”

His success with Set Free Alaska resulted in a number of high-level jobs in Alaska’s executive and legislative branches of state government. This included overseeing special projects in the Department of Military and Veterans Affairs and serving as the Director of Strategic Initiatives for the Alaska Senate Finance Committee.

Today, Ray works as a Health Policy Fellow at the University of Alaska-Anchorage, specializing in the intersection of public policy and social innovation.  And he recently started a new venture, in connection with his DSW coursework and capstone project, the 61Sixty Social Impact Lab. The organization serves as a platform for social innovation and a hub for solving complex social challenges in Alaska through creativity, collaboration and community.

“Balancing my time is my biggest challenge right now in the DSW program,” Ray said. “Sometimes I feel like I’m on a rocket ship.”

No wonder. Ray’s current commitments include two full-time jobs, doctorate studies and a high priority placed on being a good husband and a good father to his 18-month-old son.

Aiding him in making it all work is his wife Melissa, who he says is his biggest champion.

“I would not be who I am without her. I have been incredibly blessed to have someone by my side who truly believes in me. I’m also surrounded by an amazing tribe of family and friends,” Ray said. “In my life and line of work, having a safe, supportive network is critical to sustaining my pace and my effectiveness.”

Ray’s capstone proposal may not be due for another year and a half, but he knows that he wants to focus it on the strategic reduction of criminal recidivism in individuals with addiction disorders.

It is a dire problem in Alaska, and one without an easy fix.

“Nearly 80 percent of Alaska’s inmate population has an addiction disorder,” Ray said. The challenge is made more difficult by the state’s reported 63 percent rate of return to incarceration for new offenses.

It does not help that the state’s stance on criminal justice reform has shifted dramatically in the past four years. In 2016, legislation passed that sought to reduce sentences for nonviolent crimes and use the savings to boost drug treatment and reentry programs. But in fall 2019, that law was largely reversed by new criminal justice reform legislation with much tougher sentencing requirements.

Ray shares a sense of urgency about reducing reincarceration with Alaska state legislators, such as Senator Shelley Hughes. Hughes, who also chairs the Senate Judiciary Committee, wants to develop a plan to address the state’s high rate of recidivism and the number of incarcerated with addiction disorders.

At a November event organized by Ray through the 61Sixty Social Impact Lab, staff from Alaska’s Department of Corrections told the attendees that 17,000 people are released from correctional facilities in the state every year. With the recidivism rate above 60 percent, that means that thousands will be back inside within three years.

Ray’s vision is to use 61Sixty as the lead organization to operationalize his capstone project, the Alaska Recidivism Reduction Project. The project is a three-component intervention: A public-private partnership, a new comprehensive reentry prototype, and a social impact bond funding mechanism. Feedback he receives as part of his capstone development will inform the project.

The DSW’s blending of academic excellence with real world impact, and the additional emphasis on innovation and leadership, is what drew Ray to the program. He believes his education will only continue to bear fruit for him within the realm of the work he is doing with the state of Alaska.

“It has been incredibly beneficial to be working on this while in the DSW program with access to such a high level of expertise and support,” Ray said. “I want to spend my time and resources on things that add value to my community and to me. “The DSW program does both.”