Romeo and Juliet? Qualitative Interviews with US Citizens Married as Children 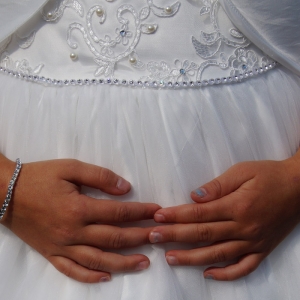 Clinical Associate Professor Kristen Zaleski is conducting groundbreaking research on the social and mental health effects of child marriage in the United States—and the policy changes that could put an end to the practice.

According to Clinical Associate Professor Kristen Zaleski, child marriage in developed nations remains one of the most under-researched subjects in the field of social work.

“While there is a hefty body of research supporting the need for increased efforts to curb child marriage—which is considered a gender-based violence issue by the United Nations—most residents of Western nations assume the issue does not affect us,” she said

To address this issue, Zaleski and a team of MSW students at the USC Suzanne Dworak-Peck School of Social Work recently conducted groundbreaking research on the social causes that lead to child marriage, as well as the psychological, physical and social effects on the betrothed. Zaleski presented some of their findings at the Annual Program Meeting for the Council on Social Work Education (CSWE) in Orlando, Florida, on Nov. 10, in an effort to spread awareness and start a critical discussion about the policy changes that must be implemented to curb rates of child marriage in the United States.

The challenges of combating child marriage in the United States

As a psychotherapist and social worker specializing in the treatment of sexual trauma, Zaleski became interested in examining the trauma that results from abusive and forced marriages. Through a request from New Jersey-based nonprofit Unchained At Last—whose founder Fraidy Reiss was forced into an arranged marriage at the age of 19—Zaleski and Reiss began to discover the dearth of research that existed on child marriage in America.

Gauging the scope of the problem of child marriage in America is challenging for a number of reasons. First of all, most states do not maintain public records of the age at which people marry—making it difficult to pin down accurate data about the prevalence of child marriage. According to recent research by UCLA postdoctoral scholar Alissa Koski and Dean of the Fielding School of Public Health Jody Heymann, however, approximately six of every 1,000 children in the United States are married before their 18th birthday.

In 2018, Delaware and New Jersey became the first states to end child marriage by regulating the age at which one can petition for a foreign spouse or act as the beneficiary of a spousal or fiancé visa to 18 years old—however, child marriage remains legal in 48 states. The issue is compounded by the fact that most domestic violence shelters refuse to accept minors and most states forbid minors from filing for divorce without parental approval, making it nearly impossible for children who experience marital violence to get the help they need.

After learning about the extent of the problem, Zaleski, Reiss and other advocates proposed new legislation that would ban marriage before the age of 18. The bill faced immediate backlash from the American Civil Liberties Union (ACLU) and Planned Parenthood, citing child marriage as a civil right.

“A lot of the resistance we faced was due to a lack of research-based evidence,” Zaleski said. So with the help of USC class of 2018 MSW students Jacob Lampe, Patricia Bevan and Aditi Wahi, Zaleski embarked on a qualitative, interview-based research project in which she surveyed 21 American adults who were married as minors.

New research provides insights into the causes of child marriage

Due to its small sample size, the study is by no means representative of the general United States population. However, Zaleski and her team did uncover a number of interesting trends.

Thirteen of the 21 participants reported that they were coerced into the marriage by their family members. Interestingly, Zaleski and her team did not identify any clear cultural or religious trends associated with child marriage. “Our group included Mormons, Jews, Muslims, Christians, Latter Day Saints and more—and their marriages occurred [in several states], from Hawaii and California to Florida and the Carolinas,” she said.

If the phenomenon of child marriage in the U.S. is not propelled by religious or cultural expectations, what is the catalyst? Most participants expressed that it was driven by pressure from their community and general social expectations. Surprisingly, teenage marriage was only involved in three of the cases in the study, signifying that there are other factors at play that force children to wed at an early age.

The study pinpointed a widespread lack of understanding and consent surrounding child marriage. While four participants reported that they consented to the marriage, the remaining 17 claimed they did not consent, they did not know if they consented or they thought they consented at the time but disagreed in retrospect. Overwhelmingly, the respondents reported a lack of understanding surrounding sex and marital expectations at the time of the marriage. “Most participants had never had sex at the time they were married and did not even understand pregnancy or how to access or use birth control,” Zaleski said.

Gauging the effects of child marriage and mobilizing change

The study revealed that child spouses are at an extremely high risk for intimate partner violence. Out of the 21 participants, 20 were women, and 18 reported experiencing violence from their spouse while seven experienced physical, sexual and emotional abuse.

The results of the survey also reaffirmed prior research that linked child marriage to poor health outcomes and a lower quality of life, including elevated teenage pregnancy and high school and college dropout rates, as well as heightened risk for mental health issues including depression and suicidality. All of these outcomes can be traced back to the trauma of child marriage, according to Zaleski: “As social workers, we understand the connection between violence or trauma and long-term health.”

Zaleski is currently pursuing a new research project that will be larger in scope, focusing on the economic as well as the physical and mental health effects of child marriage. She is especially interested in determining whether the results of U.S.-based research on child marriage correlate with the results of similar studies conducted in undeveloped countries around the world.

Ultimately, Zaleski is passionate about enacting policy to create change in the United States.

“I want to see informed policy decisions focused not only on imposing age-based regulations on marriage in America, but also on increasing access to critical resources for minors who are already married or are being forced into an arranged marriage,” she said.

Zaleski is currently recruiting for her second study on the topic. If you or someone you know was married before the age of 18 in the United States, you can contact her at kristen.zaleski@usc.edu.