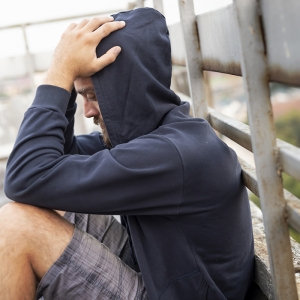 A February 2020 research summit on moral injury, hosted by the Military and Veterans Programs (MVP) at the USC Suzanne Dworak-Peck School of Social Work, expanded understanding of this subject, as scientists discussed its applicability for treatment of trauma both inside and outside a military context.

One exciting development that came out of the summit was a new understanding that moral injury can be a psychological impairment independent of post-traumatic stress disorder (PTSD), amid which it is commonly subsumed.

“What we are advocating for is a model of moral injury that clearly distinguishes it from PTSD,” said Hazel Atuel, research associate professor and one of the summit’s organizers. “To actually disentangle those two domains, to have it as a visual representation―well, it was powerful for some people.”

The three-day summit, held at USC in downtown Los Angeles, was a collaboration between the MVP and the Clearinghouse for Military Family Readiness at Pennsylvania State University. It brought together scholars from around the United States (USC, UCLA, Penn State and the University of Wyoming), as well as academics from abroad (England, the Netherlands and Canada).

Both Atuel and Ryan Chesnut, assistant research professor at Penn State, came away from the summit excited about the possibility of expanding the scope of moral injury study beyond the military, to the civilian population.

“While moral injury has been discussed and focused on in war related instances, you can experience it outside of war related contexts, and outside of a military setting,” said Chesnut, who, with his Penn State colleague Cameron Richardson, helped Atuel organize the summit. “There have been writings throughout history, about the toll that can take on an individual, when what they think ought to be true doesn’t seem to hold up anymore in a situation, either because of what somebody else did or because of what they found themselves doing that really violated what they had come to believe prior to that moment.”

The present moment, for instance, is one ripe for causing moral injury, wrote Richardson, assistant research professor at Penn State, in an email a few weeks after the event.

“There are clearly some moral injury analogues when thinking about the current (novel coronavirus) pandemic,” he wrote. “Moral Injury scholars talk about feelings of betrayal/anger (e.g., why don't people who have jobs not pitch in to help keep those without jobs afloat through this time?; why doesn't the government do more?) and shame (e.g., I focused on myself at the expense of my community...that is not me so why didn't I do more - maybe I am a bad person?) and guilt (e.g., I didn't choose to become a medical professional because the job was pandemic-proof, but here I am while others are out of work) toward self and others.”

The confinement caused by the pandemic also highlights the power and necessity of summits like the one held in February, Atuel said.

“That time that you have with experts in a room is dedicated time to moving the science forward,” she said. “You can read all the articles you want online, but to actually have a dialogue and a conversation with another research scientist and who is working in the area and sharing what their thoughts are, is something you can’t get online or just from reading an article.”