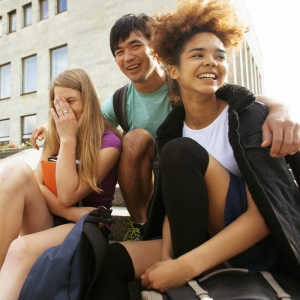 Choosing when to have children is a deeply personal decision. However, 77 percent of teen pregnancies are unplanned, and many result from a lack of access to family planning care and resources, comprehensive sexual education or proper contraception. Consequently, many teenage parents experience hardship raising the children they had before they were emotionally and financially prepared to start families of their own.

And while the number of babies born to adolescent females age 15 to 19 decreased 70 percent between 1991 and 2017, the teen birth rate in the United States remains higher than that of most developed countries, with 18.8 births per 1,000 women in this age group as of 2017.

“Teenage pregnancy prevention work must extend beyond advocating for contraceptive use,” she said. “To decrease the incidence of teen births, health care professionals, social workers and policymakers must recognize that, while unprotected sex is the direct cause of teenage pregnancy, environmental factors often influence adolescents’ sexual and reproductive choices.”

Understanding the social determinants and risk outcomes of teenage pregnancy

Healthy People 2020, a U.S. Office of Disease Prevention and Health Promotion initiative, defines social determinants of health (SDOH) as the conditions in which “people are born, live, work, play, worship, and age that affect a wide range of health, functioning, and quality-of-life outcomes and risks.” SDOH are organized into five main categories: economic stability, education, social and community context, health and health care, and neighborhood and built environment.

As SDOH pertain to teenage pregnancy, adolescents are at higher risk if they live in poverty, have less education, were born when their mother was younger than 20 years old, come from a single-parent household, experience frequent family conflict, become sexually active or use substances at a young age, report low self-esteem, or fall into certain racial or ethnic categories.

Granger outlined some additional factors that may be at play. “Teenagers are a socially minded demographic, and they often seek interpersonal validation,” she said. “As a result, teenagers who have strained relationships with parents, who have been abused or whose peer groups are toxic to their health may become pregnant at a young age in their attempt to fulfill social longings, seeking comfort in the absence of positive social outlets.”

The cyclical patterns created by negative social determinants of health

“Unfortunately, environmental factors are often interconnected,” Granger said. Existing SDOH can contribute to teenage pregnancy, which in turn reinforces the same or other SDOH. This can create a cyclical pattern of teen pregnancy: according to the Schuyler Center for Analysis and Advocacy, “the sons of teen mothers are 13 percent more likely to end up in prison,” while “the daughters of teen parents are 22 percent more likely to become teen mothers themselves.”

As another example of the ways in which interrelated SDOH generate a cyclical pattern of struggle, economic disadvantage puts young women at elevated risk of teenage pregnancy; however, only 41 percent of adolescent women who have a child before the age of 18 complete high school, further reducing their opportunities to secure stable income. Additionally, 25 percent of teen mothers have another child less than two years after their first birth, which exacerbates the existing challenges that adolescent mothers face.

A symptom of larger problems

Granger emphasizes that teen pregnancy is rarely an isolated problem in and of itself. “Unintended teenage pregnancy is usually symptomatic of larger problems and is not easily attributable to a single factor,” she said. “If teenagers are having unprotected sex, it’s crucial that we are asking why to discover the relationships between their decisions and various social determinants of health. Only then can we as a society treat the true causes of unplanned pregnancy.”

Understanding teen pregnancy as just one manifestation of an interconnected network of social, educational, economic, health and political factors riddled with disparity that requires stakeholders and activists to enact broad, systemic change to the systems underpinning American society.

Health care providers, for instance, have significant obstacles to overcome in delivering competent, culturally informed treatment to adolescents at risk of becoming pregnant. One of these challenges is achieving timely health interventions, the equitable allocation of resources and more equal access to care opportunities.

“Health care professionals may miss narrow windows of opportunity to reach youth who need services simply because many of these youth live in low-access areas, restricting their ability to receive critical care,” Granger said.

In efforts to develop more effective prevention-based interventions, Granger recommends standardizing both the preventative education teenagers receive and the medical treatment to which they can consent as minors.

Sexual education curricula are also dictated in accordance with other factors including whether the school is private or public. “Not every sexual education course adequately addresses the full spectrum of sexual and reproductive health,” Granger said. When mishandling sensitive topics or abridging critical health information, Granger believes that sexual education instructors fail to equip teenagers with the knowledge needed to practice safe sexual behaviors and prevent unwanted pregnancies.

In a similar vein, Granger points out that youth in many regions across the country are unable to access STD testing, birth control, abortion care, prenatal care or other forms of sexual and reproductive health care without the consent of their legal guardians—a stipulation greatly hindering adolescents’ agency in preventing unwanted pregnancies and receiving the care they need.

“Preventing unplanned teen pregnancy on the large scale will require committed systemic change from many angles,” Granger said. “But there are also ways we can take action today. By creating comprehensive sexual education standards and fair medical consent laws that prioritize adolescents’ ability to receive care—and then universalizing these standards across the nation—we can succeed in curbing rates of unwanted pregnancy.”