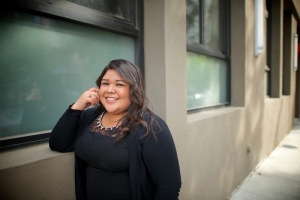 Home for Oralia Catalan used to be a makeshift house under a bridge in the North Bay. She bathed in the nearby river and did homework by candlelight. Often, she and her siblings would take home extra milk and fruits from their school lunches to eat for dinner. This was her reality for more than 10 years.

“I spent my life in survival mode,” she recalled. “I knew that as a child, if I continued to live this way, I wouldn’t be able to help my family. … I would focus on how I was going to survive and how I was going to change the course of my life.”

Born in Mexico, Catalan and her family immigrated to the United States when she was just a toddler. Given that they entered the U.S. illegally, her parents couldn’t get regular jobs. Catalan’s mom worked as a housekeeper and as a seasonal field worker in the Napa Valley. Her father also worked in the vineyards but was frequently absent from daily life as he struggled with alcoholism.

Catalan pitched in whenever she could. Every weekend, from 6 in the morning to 6 at night, she cleaned homes and offices, did yard work and a slew of other odd jobs to help make ends meet.

“I [worked] every weekend … so I didn’t have a childhood. I wasn’t able to do normal child things,” she said.

Against all odds, Catalan has survived – and thrived – through it all. Next month, she will join the 2015 graduating class as she walks across the USC School of Social Work stage to receive her master’s in social work.

Catalan and her family came to the U.S. for the American Dream but with neither networks nor steady jobs, realizing that dream proved harder than expected.

Despite the difficulties at home, Catalan’s mom made her children and their education her priority. She always made time to help Catalan with her homework and never missed a parent-teacher meeting, all while working 16-hour days.

“My mom did everything right despite the circumstances we were in,” she said. “We only had two changes of clothes but she kept us clean, washing our clothes in the river. We never felt that we were poor. We felt secure, we felt loved and felt encouraged.”

Catalan knew that her home situation wasn’t permanent and found solace in education. She believed education was the key to help her get to where she needed to be.

“We didn’t have a TV so I would read a lot. I read books, newspapers, anything I could get my hands on. It was through education where I found a sense of security, that everything was going to be OK,” she said.

She excelled in her academics, graduating high school with a 4.2 grade point average as well as thousands of hours of community service. Going to college was never a question for Catalan – it was only a question of whether she could afford it.

Out of all the adversities in her life, Catalan says the biggest hurdle has been her non-legal status in the U.S.

“Being homeless, I still had a family. Being undocumented is a systemic thing. I had everyone telling me that despite being the person that I was, despite my achievements, I wouldn’t have equal opportunities,” she said. “I was undocumented so I’m told there’s no financial aid for me. I’m told I can’t apply for state aid or university scholarships.”

Children born abroad who are not citizens or legal residents are guaranteed an education in U.S. public schools through grade 12 but may face legal and financial barriers to higher education. In 2001, then-California Gov. Gray Davis signed Assembly Bill 540 that allowed such students who met certain requirements to pay in-state rather than out-of-state tuition.

“When I was 12, I started saving up for college. I knew that as an AB540 student, I wouldn’t qualify for financial aid. Almost everything I earned went to my family, but I was able to put a few dollars into the college fund.”

In 2002, Catalan became part of the first cohort of AB540 students in California as a freshman at the University of California, Los Angeles. As a full-time student majoring in sociology and Chicana/o Studies, Catalan worked around the clock and found additional financial support through various scholarships and community awards.

Following graduation, Catalan served as an academic adviser at a high school in East Los Angeles. For six years, she helped first-generation, low-income students get into college.

“I sent kids to Harvard, Princeton, Stanford, UCLA and USC. By changing their lives, they’re going on to become counselors, teachers, doctors and lawyers,” she said. “Then one day my supervisor asked me: ‘You’re helping all these kids reach their dreams; what are you doing for yourself?’ ”

Catalan was the first college graduate in her family, and soon she will be the first to receive her master’s degree – with a Pupil Personnel Services credential and honors, no less. Still, ever so often, as she sits on campus and looks at her surroundings, she can’t help but marvel at how far she’s come.

“I still can’t believe it sometimes because I grew up homeless and undocumented and here I am at one of the most prestigious institutions in the world,” she said. “For me, it’s a miracle that I survived in this educational system that wasn’t meant for me. I not only surpassed expectations, but I was able to break stereotypes and statistics.”

Money is still tight as she juggles a full class load, a full-time job and an internship. One thing has changed, though, and it’s a feeling of security. Catalan was granted a temporary resident status under the Deferred Action for Childhood Arrivals program. While she’s not guaranteed permanent residency, she has a social security number and a driver’s license.

“Now I’m just waiting to be able to vote, waiting on being able to have a voice,” she said. “But that will come with time.”

During her two years at USC, Catalan has made an impact not only for herself but also on those around her. Adjunct Professor CarolAnn Peterson met Catalan in her leadership class and says she is one student she will never forget.

“There are times in the career of professors when we get the privilege of meeting amazing students,” Peterson said. “[Oralia is] a leader – she takes initiative, and yet, she is humble, unassuming and is soft-spoken. … I believe that when others hear stories such as Oralia’s, they can realize that someone overcame adversity to have resilience and courage to achieve something that can seem out of reach. She is an inspiration to others who may think they cannot make their dreams happen.”

With graduation just around the corner, Catalan has now set her sights even higher. She has applied for her doctorate in educational leadership at the USC Rossier School of Education. Her ultimate goal is to create greater access to postsecondary education for first-generation students in Los Angeles.