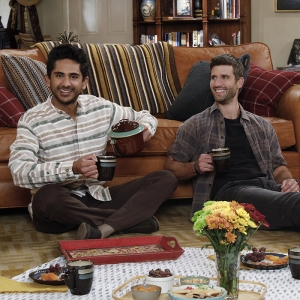 On April 1, 2021, CBS premieres United States of Al - a new comedy from producer Chuck Lorre (Two and a Half Men, Big Bang Theory) about a Marine combat veteran struggling to readjust to civilian life and the interpreter who served with his unit in Afghanistan and has just arrived to start a new life in America. The show explores the relationship between these two men and how they help each other adjust to their new lives.

So, what does a CBS sitcom have to do with the USC Suzanne Dworak-Peck School of Social Work? Enter Master of Social Work (MSW) student Josh Emerson, who landed in the right place at the right time through his field internship at No One Left Behind.

No One Left Behind (NOLB) is an all-volunteer, national nonprofit organization that supports recipients of the Special Immigrant Visa  (SIVs), and those pursuing an SIV. The founders of No One Left Behind believe the U.S. has a moral obligation to protect these interpreters, and their families, who served side-by-side with American soldiers.

Emerson, a veteran of the U.S. Army who deployed to Iraq and Afghanistan, is very familiar with Iraqi and Afghan interpreters. “I went on missions with these interpreters, got to know them, built relationships with them,” he said. “I was so very happy to be able to work with them in this capacity.

In addition to providing resources for SIV ambassadors living in the United States, NOLB advocates on behalf of the SIV population to the executive and legislative branches of government, provides subject matter expertise to the media, and partners with U.S. businesses to provide opportunities for what they call “this next generation of Americans.”

Alea Nadeem, MSW ’15, is a board member of NOLB and reached out to USC with a field internship opportunity for social workers to do macro-level clinical work in a nonprofit setting. Nadeem became Emerson’s field instructor.

“What Josh has brought to No One Left Behind has never been brought to the board before,” Nadeem said. “They now see the value in social work.”

Bringing the issue to a larger audience

Chase Millsap, a consultant and writer on United States of Al, is a former board member of No One Left Behind. “I am still very supportive, impressed and proud of all the work the NOLB team does on a daily basis,” he said.  A veteran of the U.S. Marine Corps and U.S. Army Special Forces, he holds a master’s degree from USC Sol Price School of Public Policy. "USC helped me to learn the tools about how to connect entertainment and policy,” Millsap said. “United States of Al is a perfect example of those two worlds coming together in a powerful (and funny) way.”

Millsap’s idea was to bring the issues around SIVs into America's living rooms, in a way that would make it relatable. Emerson’s experience as a veteran, his clinical and project management skills obtained through his social work studies and his stellar ability to work one-on-one with SIV recipients and applicants allowed him to inform the show’s stories with a wide breadth of knowledge.

Emerson joined James Miervaldis, chairman of the NOLB board, in helping the writers and actors on the show understand the SIV issues, the ways in which NOLB provides assistance and advocacy and sharing funny stories of cultural differences between Afghans and Americans. Emerson and Miervaldis have also been able to include some of NOLB’s SIV ambassadors in the process, those with an SIV who have already established themselves in the U.S. and are contracted by NOLB to help others assimilate.

“They’re talking to the exact people they're portraying,” Emerson said.

Nadeem sees Emerson’s contribution to the show as another platform through which to educate. “There are a lot of different tentacles to social work, and it may not seem like the most obvious place in TV and film, but it is,” she said.

The show itself touches on everything social workers value ― service, challenging social injustice, dignity and worth of a person, the importance of human relationships and integrity.

“This just makes so much sense that a social worker would be involved in this show because that's what we're always trying to communicate to a larger audience,” Nadeem said. “Through this show, you can make a greater impact for these folks to sort of assimilate them to be American citizens, and then also have the whole world appreciate their culture and appreciate what they've done for our nation to keep U.S. service members safe.”

A valued member of the team

Emerson, a father of five who resides in New Hampshire, knew he wanted to work with veterans after leaving military service. He felt that an MSW was the most versatile degree for this and chose the USC Suzanne Dworak-Peck School of Social Work because of its military social work track.

“I think to be a good social worker you need to have experience in life,” Emerson said. “To have seen some things, or been through some things, to understand the population you're dealing with and what they're going through.”

When Emerson began his internship at NOLB in 2020, Miervaldis immediately began working with him to focus on SIVs who recently had come to the United States. The first case Miervaldis assigned to Emerson was an SIV family with two young children who needed emergency surgery at a specialty hospital in Washington D.C.

“This SIV packed up his family, his pregnant wife and the two kids, used up all his money to take them by bus from Texas to D.C. in the middle of a pandemic and ended up in a bad part of town,” Miervaldis said. As the SIV’s assigned caseworker, Emerson established a relationship and trust with the SIV, helped him obtain safe housing and a job interview, and coordinated details for the children’s surgery with the hospital.

“He’s gone and done everything,” Miervaldis said. “We are very proud of Josh’s initiative and empathy for a family in such need. No One Left Behind is the safety net for our allies.”

Last year, NOLB helped over 600 families with visas and resettlement. “Josh has exceeded all our expectations and done so while communicating with clients who speak in broken English, Dari and Pashtu, struggling during a pandemic,” Miervaldis said. “His professionalism and empathy are great credits to USC. We would not be where we are today without him. That is not hyperbole.”

Miervaldis hopes NOLB will have more social work interns from USC to continue Emerson’s work. For him, Emerson’s project management skills have been the greatest asset, creating a new process for how NOLB provides help for SIV families. “We told Josh, you're a pathfinder, you're a pioneer,” Miervaldis said. “We need to figure out very quickly what works, what doesn't work, and he took it and said, ‘okay, point me in the right direction.’ He’s very much valued as a member of the team.”

From advocacy to TV

No One Left Behind gets about 20 messages every day from Iraqi or Afghan interpreters who served with U.S. forces in their countries, and who now receive daily death threats from the Taliban.

“They're not allowed to live in their homes or their neighborhoods anymore because they helped the U.S.,” Emerson said. “Now the U.S. is withdrawing from all these countries, and the Taliban and terrorist activities in general are picking up, and these people are getting pressured and killed. NOLB has over 300 cases of SIVs who have been killed waiting for their visas.”

Emerson hopes that the added exposure from United States of Al will bring awareness particularly to service members about what these interpreters are experiencing and how they can help. One of the requirements for an SIV is a letter of recommendation from the U.S. service member with whom they served, and those have been the most difficult items for SIV applicants to secure.

“I have been able to provide some input to what should be addressed in the show,” Emerson said. “It's interesting to see how advocacy on an issue can turn into something this large scale.”