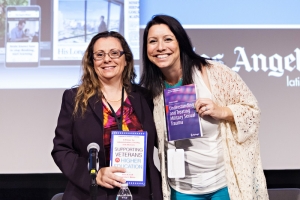 A new book by a USC professor provides historical and cultural context, along with recommended changes to policy and clinical practice, to help stem the epidemic of sexual trauma in the military.

Believed to be the first social work text to address the topic of military sexual trauma, Kristen Zaleski’s Understanding and Treating Military Sexual Trauma aims to fill a gap in resources she herself noticed when she first started treating veterans.

Zaleski, a clinical assistant professor at the University of Southern California’s School of Social Work and licensed clinical social worker, spent years working with sexual assault survivors in the civilian world before being hired by the Veterans Administration to work with survivors of military rape.

“To my surprise, I couldn’t find any text to help orient me to the history and culture of this important group of trauma victims. There was no research on psychological theories that could help understand how their sexual assault could be treated in psychotherapy,” she said.

This book was written for students, researchers and behavioral health therapists interested in understanding the unique needs of the population by considering the history, culture and politics of sexual assault in the military. It also examines the current policies and treatment methodologies, and questions the VA’s “one size fits all” approach to many military sexual trauma therapies.

“I offer a fresh perspective on this issue to help treat the whole person who was sexually victimized in the military instead of just treating the symptoms as most standard VA treatment practices focus on,” she said.

Written by an acknowledged expert on the topic, this book greatly advances the current knowledge of military sexual trauma. Zaleski’s thorough analysis of sexual assault in the military examines the scope of this long-neglected issue using a lens informed by modern-day attachment and trauma theories. This powerful presentation—which includes sobering quotes from survivors—raises serious questions about meeting veterans' needs, training for on- and off-base clinicians, and government funding. The book also includes a look at Zaleski’s own “military rape sub-culture hypothesis,” which seeks to address why this epidemic has been spreading rapidly despite efforts to stop it.

Zaleski’s decade-long work with sexual assault survivors spans inpatient and outpatient settings, and she has a dual specialty in civilian and military sexual trauma. Zaleski has published research on treatment for sexual assault-related post-traumatic stress disorder and was the first to ever publish on the psychological effects of pregnancy resulting from a sexual assault. She also maintains a private practice in Los Angeles.