A Message from Dean Sarah Gehlert on the Derek Chauvin Verdict 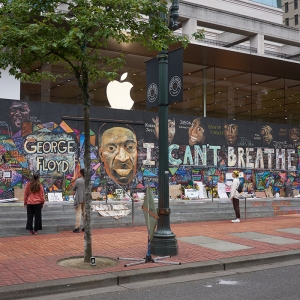 When I heard the verdict read at the trial of Derek Chauvin, I was relieved that a change had been made in how excessive violence by police officers has been viewed and treated in courts. This gave me some hope that a door had finally been opened to create change. A single verdict does not even begin to erase all the lives lost over decades of police violence based on prejudice and discrimination. It does however signal that change is happening, or is at least possible, if we are vigilant. It can be a step taken toward ending systemic discrimination by race in how our judicial system considers the actions of police. The wisdom of George Floyd’s seven-year-old daughter, who stated that her dad “changed the world,” has been validated. We also recognize the wisdom and courage of Darnella Frazier, the Minnesota teenager who filmed the event, knowing that what she was witnessing was wrong.

When the verdict came in, I was with a group of community activists from three California counties around Los Angeles. While group members expressed some elation for an episode of justice realized, some cautioned that this victory does not mean that all is well. Racism, and the discrimination that it engenders, continues to run rampant through our judicial system. Within the last week we have added the names of Daunte Wright and Adam Toledo to our protests and vigils. We hope this verdict is a turning point, but we will need to work to assure it.

It is worth reading a publication from 2018 to understand the role that social work needs to play in ensuring effective and lasting change to our judicial system. In their paper entitled “The Futile Fourth Amendment,” Professor Osagie Obasogie and Postdoctoral Researcher Zachary Newman examine the Supreme Court case that established the standard for court adjudication of excessive force by police, and how this has perpetuated excessive use of force in many communities of color. Protesting alone will not create the change we want to see. It will require change in policy and practices to establish equal protection for all under the law.

This is a moment for us as social workers to seize. We must not wait to act until there is another incident of police brutality or an unfair trial. We should use this moment to move forward with renewed conviction in our beliefs, using our training in policy, community organizing, management and planning, and clinical practice. We should always be the voices demanding equality under the law, saying that an end to systemic racism is possible. The world is ready for change and social work should be leading it, with those whom we serve. We should be the champions of social justice for the well-being of individuals, families and communities through innovative teaching of evidence-informed and practice-based skills, and pioneering transformative research. If not us, then who?