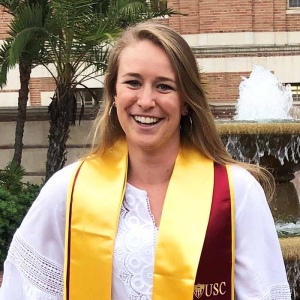 Meet some of the outstanding military track MSWs from the class of 2019.

Students who choose to study in the Military Academic Center (MAC) at the USC Suzanne Dworak-Peck School of Social Work come from a range of backgrounds and are drawn to military social work for a variety of reasons. While some are service members and veterans themselves, some are members of military families. Others are seeking a fulfilling career path working with underserved populations or to enact systemic change within the mental health care system.

Regardless of their unique backgrounds and various professional ambitions, all MAC students share a deep desire to meet the needs of service members, veterans and their families.

Here’s a snapshot of a few outstanding students from the class of 2019 and their unique visions for the next phase of their careers in military social work:

“As a veteran, I was frustrated by the quality of care that I received personally and that I witnessed other veterans receive,” he said. “I felt compelled to help improve what I saw as an imperfect system and deliver the support that my fellow veterans desperately need and deserve.”

Brown, who spent 23 years in the graphic design field after serving in the military, decided to apply to the USC Suzanne Dworak-Peck School of Social Work, where he studied on the military social work track.

During his time at USC, Brown worked as a co-facilitator for the Wellness Recovery Action Plan groups at the West Los Angeles Veterans Affairs Medical Center and witnessed the powerful effects of group therapy.

“By creating trust in these groups, we were able to cultivate honesty in discussing difficult real-life issues, which naturally propels the therapeutic process and gets veterans closer to leaving the hospital system,” Brown said. “Watching veterans make the transition from mandatory psychiatric holds to outpatient services filled my heart because it indicated that a veteran’s mental health was improving—often due to the high levels of support and care given by practitioners.”

With his MSW in hand, Brown aims to continue working toward his goal of improving veterans’ mental health care services through a career that merges his passion for art and his vow of service: he plans to become a board-certified art therapist.

“I’m a creative problem solver, and I want to use that skill set to foster innovation within the veterans health care system,” he said. “We owe it to our service members to provide the highest quality care possible.”

After completing an undergraduate degree in history, Alexandra Savage found herself working and volunteering at the WomenShelter of Long Beach and Zinsmeyer Academy for at-risk youth.

“These experiences stirred my interest in the intersection of trauma and mental health,” she said. “I realized that simply listening to the stories of underserved women and children had noticeable effects on them—it was as though a weight had been lifted from their shoulders.”

She found the work deeply rewarding, and seeking to help other survivors of trauma, decided to pursue a military social work education at the USC Suzanne Dworak-Peck School of Social Work.

Savage cites her internship at Women Vets on Point as one of the crowning experiences of her time at USC. “I was able to hone my clinical skills and earn direct exposure to the inner workings of a new pilot program,” she said. “In that role, I learned how resilient veterans are.” Savage also noted that working at Women Vets on Point, as well as serving as a graduate student clerk for the USC Marshall School of Business’ Master of Business for Veterans program, gave her “the boost of confidence [she] needed as a civilian working in a veteran community.”

Savage plans to begin accruing hours to earn her clinical license in social work. She hopes to eventually work as a therapist for active duty service members or as a clinician at a veteran-focused nonprofit.

Following eight years of service in the Navy, Joel Jeffries weighed his career options. “I thought law enforcement was the next step for me, until I realized that I was more interested in gaining an understanding of the ‘why’ behind human behavior than reacting to those behaviors,” he said.

A VA counselor suggested social work to Jeffries, who admitted he was skeptical at first. Upon learning more about the breadth of possibilities in the profession, Jeffries became more interested. “I recognized that an MSW would equip me with the tools needed to effect systemic change where it is most needed,” he said.

As a veteran, Jeffries felt especially drawn toward military populations, knowing that his firsthand experiences would be valuable in helping him connect with service members and their families. As such, he decided to study on the military track at the USC Suzanne Dworak-Peck School of Social Work.

At USC, Jeffries attended the annual Military and Veterans Policy and Practice immersion trip to Washington, D.C., and considers it a “must-do” for MAC students. In fact, it was this trip that ignited Jeffries’ desire to pursue a social work career in the D.C. area. Today, Jeffries is seeking the right job fit with the help of advisors at USC as well as his former internship lead at the West Los Angeles Veterans Association Medical Center.

Jeffries credits the faculty at the USC Suzanne-Dworak Peck School of Social Work for setting him up for success.

“The professors believe in you and really bend over backwards to help you reach whatever goals you have in mind,” he said. “Lots of people earn impressive degrees, but not everyone can say they gained a family in the process.”